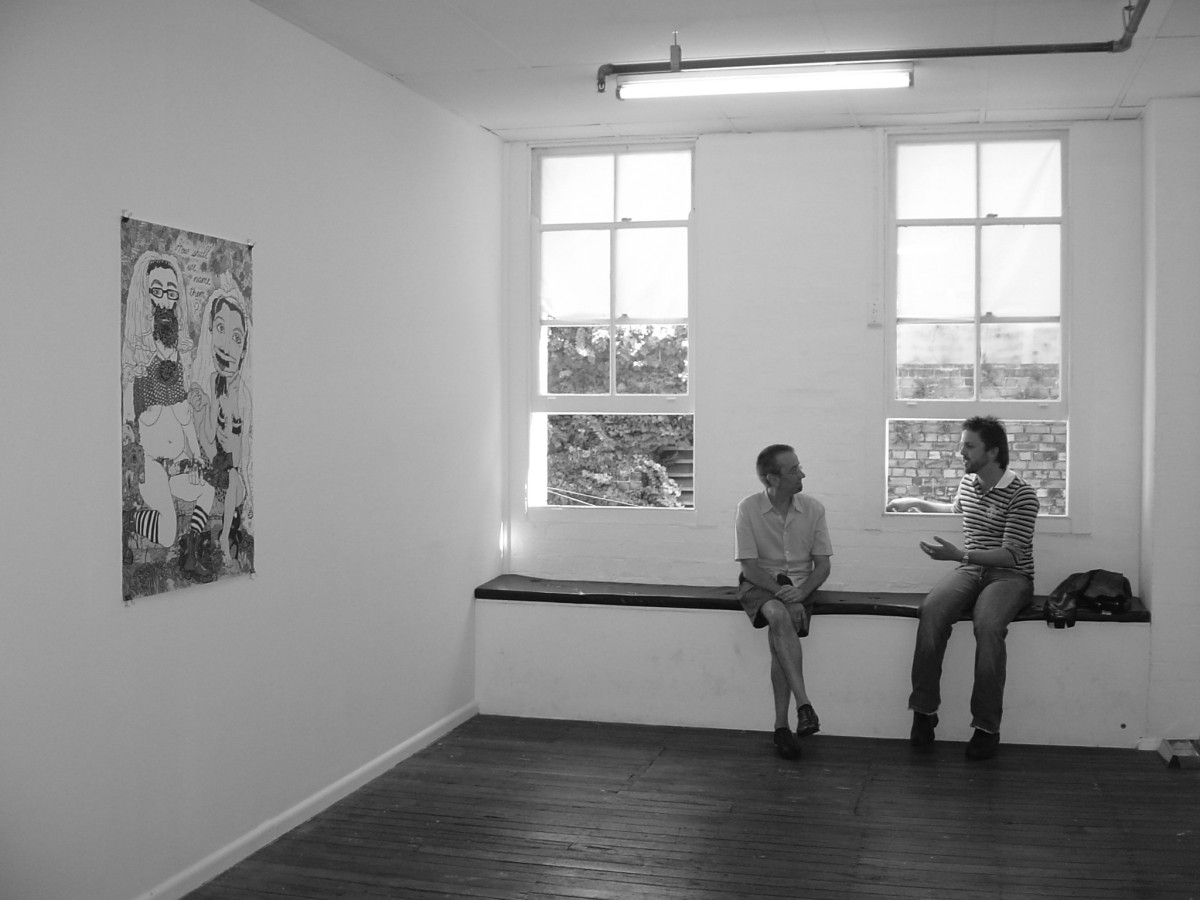 The prospect of writing this narrative about MOP has triggered bouts of creative paralysis. It is certainly easier to write about something when you are outside the picture: objective and removed from how the story unfolded. After a period stifled by procrastination, I plucked up enough mental grit to smash out this story—at least from where I sit in relation to it. I started by opening a web browser and Googling ‘should you write your own art history?’—hoping the algorithmic oracle would talk me out of chronicling an account of a gallery to which I had been so inextricably linked. If you ask dumb things of the internet expect equally stupid answers: ‘Seven Essential Steps for Starting Your Own Art Movement’ being one such asinine case in point.

When MOP Projects opened, with a group show on 28 May 2003, the internet was in its nascent dial-up phase and starting your own art movement was (and still is) more achievable in the form of DIY ARIs. Or, ‘artist-run initiatives’ for the uninitiated. And this is exactly what George and Ron Adams did along with Billy Gruner and Kyle Jenkins. Located at Room 16, Level 2, 617 Elizabeth Street in Redfern, MOP Projects was an L-shaped room that logically pre-empted the formation of the larger ‘Gallery’ adjoined by the ‘Project Space’. A diverse range of industries were represented by the resident tenants, though historically the site was known for its association with the rag trade.

MOP, as we came to know it in Redfern, formed in the wake of an exhibition its founders hosted in 2002 at Imperial Slacks, another important ARI back then. Inspiring the MOP acronym, the exhibition Modes of Practice was the origin point for the gallery to come. For Gruner, it was an opportunity to road test the research being written up in his doctoral dissertation, ‘Painting the Object: Recent Formal Australian Painting’.

I have no memory of MOP opening in 2003 because I was not there. I came to be a MOP regular the following year. I first met George and Ron Adams in the lead up to Flaming Muses, a Mardi Gras festival exhibition I curated them into at the old Performance Space on Cleveland Street in 2002. Then our paths crossed again at a Sydney art fair in 2004, where Ron and George brought me up to speed on MOP, the gallery they had co-founded. They added me to the mailing list and suggested I curate something at the gallery someday. Intrigued by the prospect, I started frequenting the space, keen to see where I could fit into the picture.

Little did I realise as I started visiting MOP that it had been a playground for artists preoccupied with abstraction, minimalism, concrete and non-objective art. Among the key figures of this early history were Adams, Gruner and Jenkins, but also Manya Ginori and Mimi Tong who were instrumental in the formation of MOP’s volunteer committee. Due to various tensions and competing ideas over what MOP should be, Gruner defected from MOP to form SNO at a factory in Marrickville, before settling in Leichhardt where it still exists today. An acronym for ‘Sydney Non Objective’, Carolyn Barnes writes, ‘SNO sought to harness the collective agency of artists to address the meanings of abstraction from the perspective of the present and that of art history, attending to a tangle of assumptions about the nature of Australian abstract art and abstraction in general’.

From its second year running until the end, MOP was fortunate to receive annual arts funding from the State Government. ‘In the beginning we were completely self-funded’, explains George Adams. ‘We did it truly for the love of it. Our first year wasn’t so much a challenge as it was exciting. We hammered away and had a show every two weeks. But we were particular about what we showed’. As MOP’s community of artists, curators, collectors and friends expanded, so too did its scope. While it will always be remembered for its critical dedication to formal painting models in the early days, MOP diversified its approach and began embracing emerging, mid-career and established artists outside a particular academic tradition that had hailed mostly from Sydney College of the Arts. Considering that I was a mid-nineties product of the now-defunct art school of the University of Western Sydney (now Western Sydney University), what I represented to MOP must have been quite foreign. Over the years, western Sydney artists came to be a voluminous part of the gallery’s programming, as surveyed in Ann Finegan’s contribution to this book. Having met George and Ron through a queer art context, the first exhibition I curated at MOP continued this tradition with a Mardi Gras festival exhibition called Dress Code. What would become a frequent curatorial association with Liam Benson and George Tillianakis—then fresh out of Western Sydney University’s art school—started with this rather modest exhibition in 2005.

In retrospect, 2005 was an important moment in Sydney for critical conversations pertaining to the important work performed by ARIs. Notably, Russell Storer curated Situation at the Museum of Contemporary Art (MCA). Through the prism of selected ARIs from Sydney, Singapore and Berlin, Storer examined the significance of institutional critique and self-organisation that feeds into the formation of artist networks. While MOP was not directly cited, given its burgeoning status on the scene, Storer’s exhibition contextualised the groundswell of artist-run activity occurring at a time in Sydney just prior to mass urban gentrification. As Storer writes:

Rapid inner-city development, escalating rents, limited finances and heavy workloads have meant that these spaces are often short lived, while shifting funding structures and a growing contemporary art market have encouraged an increasingly professionalised approach to artistic practice over the past decade.

Like early Sydney ARIs Inhibodress or Art Unit right through to Firstdraft or Imperial Slacks, MOP thrived from the collective labour of artists passionately committed to presenting and encouraging critical conversations about their work.

Over time, MOP forged collegial relationships with fellow ARIs through exchange exhibitions, a testament to the interconnected and networked life of a city rich, as it were, with artist-run endeavour.

Known for textile print works that maps the psychogeography of places, people, ideas and things, one only needs to look at Justin Trendall to gauge a sense of this history. Held in the MCA collection, Trendall’s Darlinghurst (2010), for instance, is a fitting constellation of Sydney ARIs commingling with artists and concepts to shape a city’s pulsating cultural history.

After four years at Elizabeth Street, MOP had clearly outgrown its premises. I was now well and truly ensconced in the busy rhythm of MOP and had even been seconded by George and Ron to work on the two publications associated with a satellite partnership that Hazelhurst Regional Gallery had formed with MOP called Our Lucky Country. By the time the project was concluding, I had migrated from the western to the southern suburbs, having taken up the full-time curator role at Hazelhurst. The year I moved to Hazelhurst in 2007 was the year MOP moved from Redfern to Abercrombie Street in Chippendale. At that time, the Chippendale gallery was leased by commercial gallerist Esa Jaske. Some artists to show at MOP early on, such as Christopher Hanrahan and Nuha Saad, had also presented their work at Jaske’s space. Having decided to shut up shop, Jaske asked me if I was interested in taking over his lease. Immediately I proposed the idea to George and Ron, and together we seized upon the opportunity to upgrade MOP from its inauspicious office-like rooms to a more conventional white cube style space.

MOP at Chippendale was architecturally divided into two exhibition spaces, echoing Redfern’s structure of a larger Gallery paired with the smaller Project Room (though the larger area was subdivided with the introduction of the gallery wall). Opening at the new space in June 2007 with solo shows by Halinka Orszulok and Rachel Scott, MOP’s volunteer committee worked feverishly to catch up with the demands of an expanding space that had enabled greater support and visibility for Australian artists. Alongside Ron, George and myself, the committee members at that time were Drew Bickford, Harriet Body, Mitch Cairns, Marita Fraser, Adam Norton, Nana Ohnesorge, Emma Thomson and Holly Williams. In 2008 we all travelled to Hobart together for a committee group show called Stupid Little Dreamer at Inflight, an ARI now known as Constance. While volunteer labour was integral to the viability of MOP’s operations, committee artists were always remunerated with a slot in the exhibition calendar to curate a show or present our own work, with the occasional value-add of curated satellite shows like the Hobart gig. Otherwise, the bulk of the programming was committee selected from an ever expanding pool of artist and curator proposals.

Personally, I regard the two years following MOP’s move to Chippendale as a watershed in my own practice as curator and artist. Most of all, MOP allowed me the freedom to inhabit or hybridise both roles as I saw fit. Presented in December 2007, my Funeral Songs jukebox mixtape installation was a personalised attempt to blur my identity as artist and curator. Funeral Songs made a leap to the collection of the Museum of Old and New Art when it was presented in expanded form as part of the MOFO festival in 2012. A large part of the contributors forming the list at the heart of Funeral Songs were MOP artist peers with whom I worked and played during this memorable time. Other works produced for solo shows at MOP, particularly Oh Industry (2009) and Rhymes with Failure (2010), have had an afterlife through acquisition into public collections and inclusion in institutionally curated exhibitions.

This is a familiar story for many artists of my generation affiliated with MOP: to have been nurtured as emerging artists before varying levels of institutional or commercial success, as demonstrated in the pages of this book. It was not uncommon for an artist to have presence at MOP one minute and then be showing at, say, Sarah Cottier Gallery the next. Such was the growing commercial interest in artists who cut their teeth at MOP that the gallery formed an off-shoot called Galerie pompom in 2012. The larger gallery became pompom with MOP operating as an artist-run adjunct in the Project Room. Certain artists known for showing at MOP migrated to commercial representation at pompom, with an invited stable of artists introduced into the mix.

MOP’s history was widely documented in what is now a vast archive of exhibition catalogues. Collectively, these slim publications record the energy and preoccupations circulating in and around MOP from the diverse perspectives of arts writers, academics and artists-who-write. On the occasion of this book, Naomi Riddle was commissioned to respond to MOP’s publishing history by selecting a patchwork of quotations to reflect a collective snapshot of ideas animating the work and its reception.

Printed exhibition ephemera is susceptible to a cultural amnesia that can engulf and erase local art histories of the recent past. The opportunity to survey MOP’s vital lifespan, at the very least, combats memory gentrification. All that is missing, really, is the gossipy soundtrack of opening night white noise, cheap piss and bummed ciggies, the hook ups and come downs—the million dollar bingeworthy memoir someone will hopefully write someday.

Essay for book surveying the history of MOP Projects (2003–2016), and republished in modified form by Art Monthly Australasia, October 2019, issue 319.