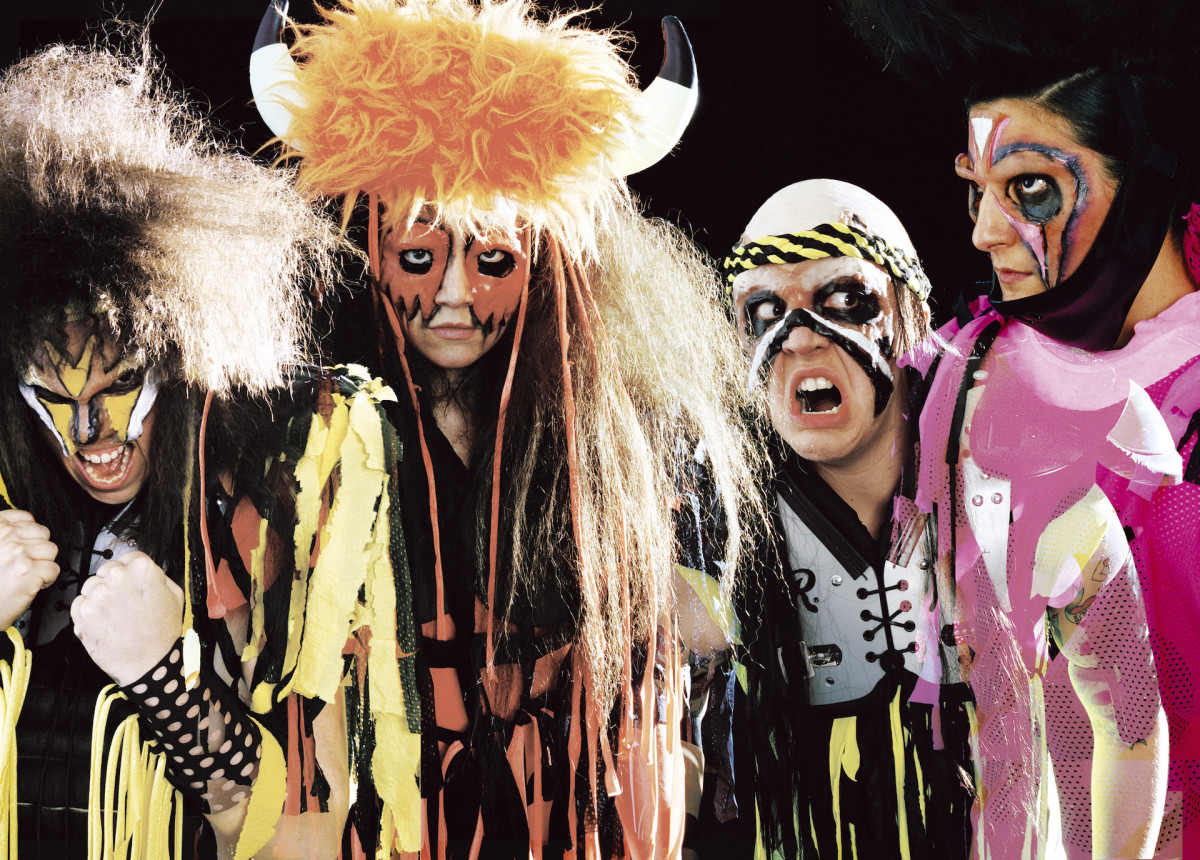 The Kingpins, Welcome to the Jingle, 2003
Photo: Liz Ham

Earlier this decade, I curated a “group group” exhibition called Flaming Muses at Performance Space (2002). The exhibition examined the creative processes of collaboration between same sex artist couples and included, among others, Scott Redford and Lyell Bary. A couple does not necessarily constitute a “group” so much as a duo, but the principal of collaboration is the same once an artist distributes authorship beyond the self. Prior to Flaming Muses I had only curated exhibitions with solo artists, so the realm of collaboration was untested ground. While “re-grouping” afterwards I realised several months had been spent negotiating some fairly tricky waters. It seems the power relations navigating collaboration can be volatile at best. Luckily no one split up until at least after the show was over.

Several years later I curated an exhibition called Multiple Personality (MOP Projects 2007) that was not about collaboration as much as it was about addressing the way artist persona animates much contemporary art practice. Ms & Mr were the only collaborative partnership represented per se, but other artists like Sari Kivinen and Luke Roberts were invited to participate because their solo practice was about a process of collaboration with multiple personas. This is artmaking as a kind of productive schizophrenia: where artists invent performative personas, characters or roles that expand the self into a repertoire of selves. Who’d have thought a solo artist could constitute a group?

What I think my own curatorial encounters with artistic collaboration have shown is how a cult of personality drives art practices motivated by collaboration. Nowhere is this more apparent than the formation of group collaborations because where there’s a group there is usually a performative approach to art practice dependant on the splintering fictions of a self, orbiting in relation to several others. Perhaps the closest or most convenient analogy we could apply to the artist group is the rock band and we’ve certainly seen that narrative play out before: the band eventually splits after too many drug-addled Fleetwood Mac-like entanglements, and the lead singer (who was always really the focus of fabulousness anyway) becomes a star in their own right while the rest lead comfortable lives as bitter session musicians. But do the fast living clichés of rock and roll stardom really apply when art groups by their very nature often deliberately challenge the expectations embedded in popular music contexts?

Art and rock groups are comparable to an extent, but often the reason for artistic collaboration is to consolidate resources and suppress sole authorship, while authorship for the rock group is inevitably attributed to whoever wields the microphone. The blur between art and music is most evident with artist groups like The Kingpins and Chicks on Speed. The Kingpins, for example, easily draw on the macho codes of fame and celebrity because their effortlessly parodic blurring of art and music calls for it. What started as a joke between four friends who took to a Drag King stage and won the main prize one night in 2001 has since become legendary because they have become the rock stars our art scene needs.

Drawing on the visual hyperstimulus of warp speed media languages, many art groups today merge art, design, music, cinema and performance to demonstrate the increasingly interdisciplinary sophistication of much contemporary art. By drawing on multiple mediums, groups increasingly negotiate the art and entertainment nexus in much bolder and attention grabbing ways than is possible for the solo artist. It used to be a big deal for an artist to master their medium: it is not uncommon for a monochrome painter to spend his whole career perfecting the palette’s aesthetic and conceptual terrain. These days such faithfulness to media singularity is fast becoming redundant as rapid-fire media convergence calls for artists to become increasingly promiscuous with the forms through which they communicate. Artist groups are like human montage in motion – a cut and pasting of multiple sources of creative energy. That artist duos like Soda_Jerk and spat+loogie use montage and collage as their primary mode of practice is certainly apt. The authors or producers of the images sourced by such artists, then, become unwitting collaborators.

The remix films of Soda_Jerk contain sample lists boasting directorial sources as diverse as Peter Weir and Stanley Kubrick. Their photocollage practice similarly remixes readymade images that through recombination generate new meanings and associations. In an artist statement Soda_Jerk write: “the concept of collaboration is the key to the way we work because in a sense we are not only collaborating with each other, but also with the ‘original’ creators of the material we choose to work with. For example, when we list the films that we’ve sampled from at the end of a remix video, we are essentially acknowledging this wider sphere of collaboration.” spat+loogie also use collage practices to engineer interesting collaboration dynamics. In their Futuresearch (2007) series, spat+loogie made collages from images found after firing a string of terms into a search engine. spat+loogie emailed the web administrators behind the images sourced, asking them why they thought the images were linked to the search terms. In a sense this virtual dialogue expands the collaborative process beyond the artists by inviting response from image producers or custodians who may not realise their role in collaborative art production.

Convergence, then, works twofold as the bringing together of people as well as congealing the mash of media images and producers making up the hybrid whole. While The Kingpins are renowned for their polished video and photo installations rife with an appetite for both human and media convergence, their commercial gallery exhibition of paintings, Great Undead (Kaliman Gallery, 2007) shows an ironic wit: as commercially represented artists they seem to be acknowledging that despite current flash-in-the-pan trends for flashy video art, paintings will always be heralded as the gallerist’s most enduring staple (after white paint and polished cement). Sometimes the most innovative thing is the most unexpectedly conventional and the artist group a perfect arena for experimenting with our expectations of what constitutes art in our increasingly saturated visual culture.

An inherent danger for artist groups embracing the latest in convergence cachet is that audiences can be as fickle and unfaithful as artists are to adopting a singular approach to artmaking. Like a band whose second album does not live up to the hype of the first, making their third album a premature career “best of”, artist groups with a good eye for the performative conceits of collectivity can be here today and gone tomorrow. Perhaps an ephemeral existence is written into the script for some groups aware that their shtick is very much about referencing the moment. But I wonder how far off the solo career is when planned obsolescence kicks in. And to who does such solo successes belong when claims to authorship are less clear-cut for art groups than for their musical counterparts? It’s hard to say, but like Fleetwood Mac, the breakups are always followed by the comebacks.