Essays, Articles
The Air is Free
on James Fardoulys and Dean Manning 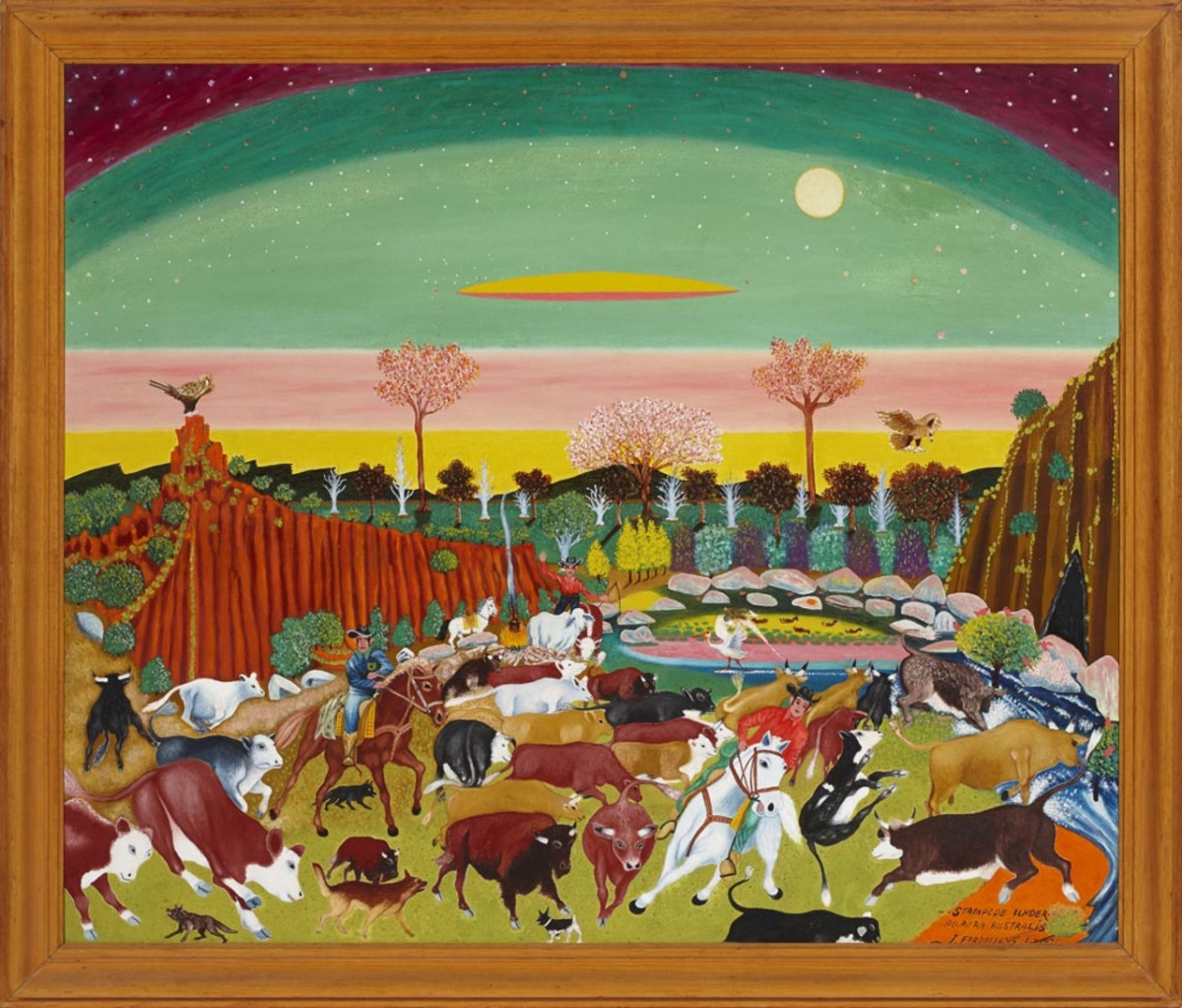 I came to know the work of James Fardoulys through a work held in the Artbank collection, Stampede under Aurora Australis 1971. I wasn’t initially drawn in by the work’s fantastic shock of colour or its hectic rodeo stampede – complete with what looks like a ‘flying saucer sky’. My first encounter was the back of the work, which yields a gorgeous cluster of inscriptions and labels denoting its rich provenance. The elegant typefaces of the past include quaint markings of the artist’s hand, denoting the journey from one art prize to another.

These labels revealed that it had been a finalist in the 1971 Wynne Prize before subsequently being entered in four other competitions. Fardoulys was a frequent art prize entrant. He once remarked: “The only time I have had an open exhibition with open honest judges – I got first prize. Therefore I have been robbed 17 times by corrupt administrators”. We all know that feeling!

Fardoulys took up painting late in life after retiring from driving cabs around Brisbane for almost three decades. Self-taught aside from compulsory lessons in school, he dabbled in painting prior to retirement from his day job when he decided to “give the art a go” - this is actually a quote from Woman’s Weekly!

During his lifetime Fardoulys achieved some recognition as a ‘naïve’ artist. Fardoulys’s life was just as colourful as the palette he presented to the world. Born in 1900 in Patamos, a village on the Greek island Kythira, Fardoulys migrated to Australia 1914 and worked in cafes in various locations in NSW and QLD before marrying a ventriloquist and joining her travelling troupe. Fardoulys eventually settled in Brisbane, raised a family and took to driving cabs. He became a local identity known to brag of famous fares like Prime Minister Robert Menzies. He was often photographed in a white singlet, cigarette in mouth. Women’s Weekly described him best: “Jim Fardoulys is a medium-sized nuggety man with dark hair and very bright dark brown eyes. He believes in comfort and doesn’t like shoes”.

From his first solo show in 1966 till the end of his life, Fardoulys received some success commercially, selling to public collections like the National Gallery of Australia. He had a steady following with private collectors in Brisbane which extended to London when ex-pat Barry Humphries chanced upon his work and commissioned a portrait that was reproduced on Humphries’s 1968 book of Australian verse. A painting even made its way to Oklahoma in the USA, later returned to the Fardoulys family via eBay.

I have since saved a search in eBay for Fardoulys in the hope that maybe one day, one will hang in my home! 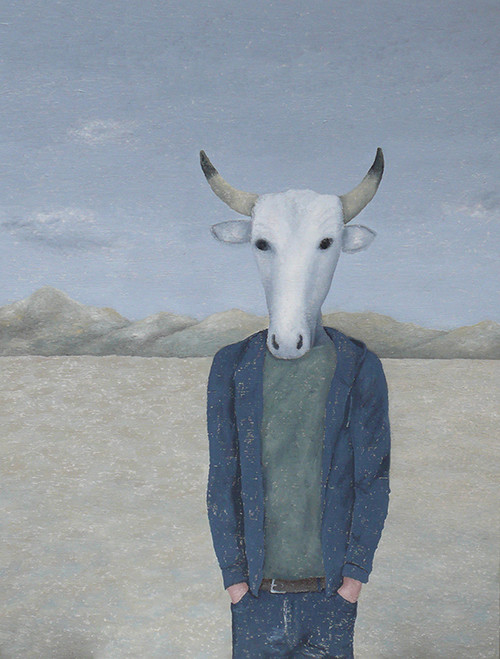 Catherine Benz’s curatorial notes say this exhibition brings together Fardoulys’s imagined Australia with Dean Manning’s imagined Greece. Dean’s pictures were made in a kitchen in Athens during a recent trip. He depicts smoky café scenes, musicians, people going about everyday life. There is a sweetness of touch, a gentle deadpan humour in everything Dean does. But there’s a sadness too: his figures float in void-like spaces, slightly alienated and remote. Perhaps it’s the melancholy of migration, the condition of the diaspora, that evokes this mood. In one self-portrait, Dean wears a sailor’s uniform with one foot in a boat, the other on land. This push and pull, tug of war of feeling – “Should I stay or should I go?” – permeates the work with a wistful longing for something gone, a lost country, a lover no longer there, all the ghosts among us. Dean’s paintings are musical; his music is painterly. His moving image work often bridges the two.

Dean’s fandom for Fardoulys is evident in a narrative painting called The Lovesong of J. Nicholas Fardoulys. What a defining life moment to share a gallery with your artist hero. In 2013 I wrote about the Artbank painting for the magazine Sturgeon and curated it into the Artbank collection exhibition, Loose Canon. I didn’t know Dean very well, we had only met briefly a few times before, but he came up to me at the opening and gushed dreamily about how he had never seen a Fardoulys painting in the flesh until that moment. I still recall his childlike wonder at seeing the work – akin to the experience of seeing land after long being at sea. The signs of life that linger in the imagination, later rendered in pigment on rustic boards. Air is invisible, meant for one and all. That’s why we take it for granted. In the paintings of Fardoulys and Manning, the air becomes visible and wondrous. Get up close to these pictures, take the time, look and see – the air is free. 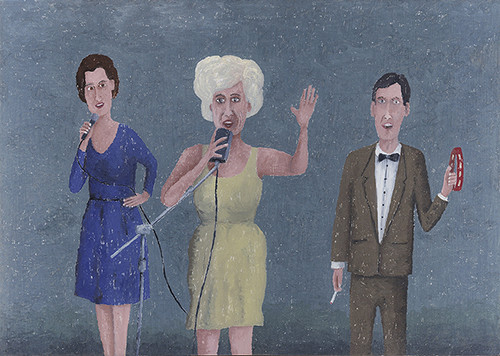 Previously unpublished speech notes for the launch of James Fardoulys and Dean Manning's The Air is Free at Delmar Gallery, Sydney, curated by Catherine Benz, 3 July 2016.