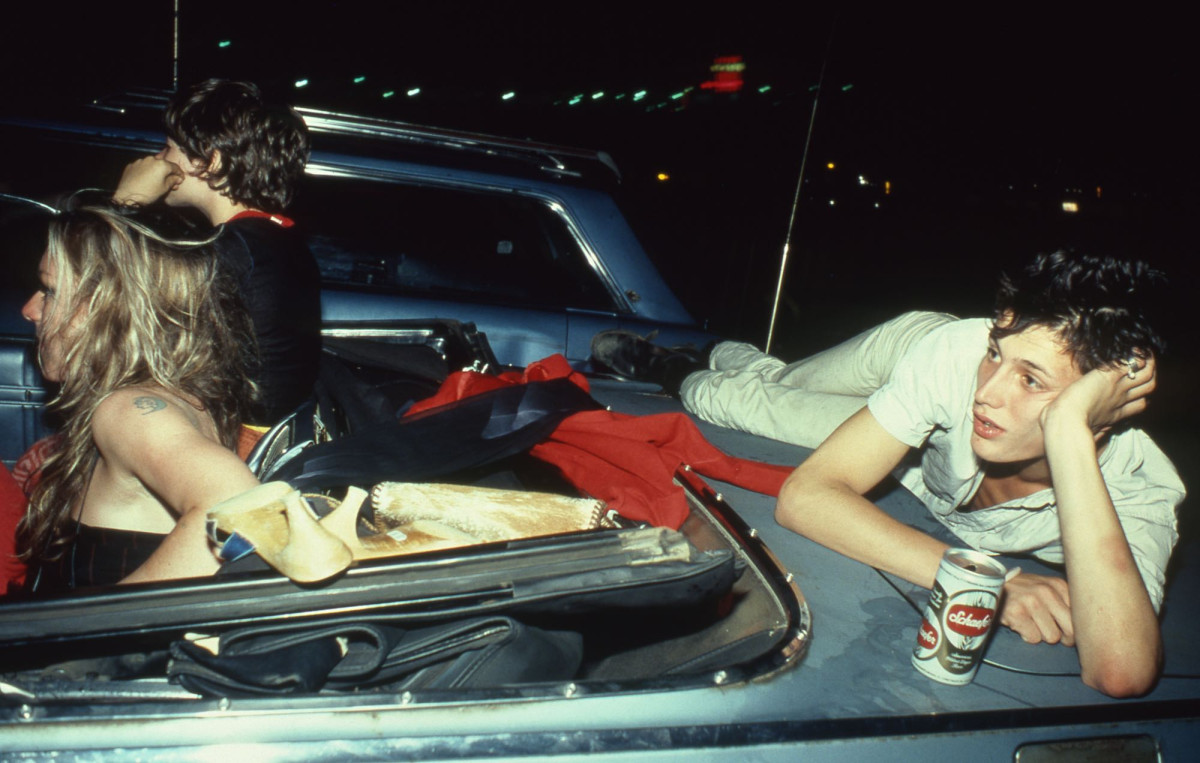 Nan Goldin, French Chris at the drive-in, N.J., 1979
From The Ballad of Sexual Dependency

I have a slight corner on something about the quality of things... more like that I was perfect temperature, the perfect thermometer for the times.
— Diane Arbus, 1969

Predictably, the Goldin/Arbus comparison was applied during the prickly question time that followed Nan Goldin’s slide show, The Ballad of Sexual Dependency, at the Museum of Contemporary Art. This review develops a more geographically relevant comparison: the work of Nan Goldin and William Yang—presented as part of this year’s Gay and Lesbian Mardi Gras festival—among the most compelling and problematic queer photography being produced today. The images traverse a multitude of slippery identities that have ‘stumbled’ into the lives and lenses of both photographers. Chronicling separate sub-cultural regions of the globe, Goldin and Yang measure with barometric precision the tenor of their times.

Yang’s subjects display a preoccupation with personal style and political empowerment all-too-consistent with the outward impetus of queer pride and liberation. Goldin’s quest is a little more internal. The queer vulnerability of her images signifies an inner conflict compromising surface calm. As Goldin and her cast of eclectic characters work their way through parties, drugs, drag, violence, lovers, genders, bed linen and eighties fashion, we become privy to her disquieting ability to capture, as Arbus suggests, ‘a slight corner on something about the quality of things.’

The Ballad of Sexual Dependency examines many relationships and explores many codes of sexuality and gender. She mediates these concerns through the ritual documentation of an ordinary reality that is made extraordinary simply by being photographed. The effect is visually disarming and intensely personal. Narrative forces fail to propel The Ballad, yet dramatic pathos is achieved through the use of an accompanying soundtrack, a strategy that seductively invites viewers to create their own reveries. Like the characters who comprise The Ballad, these reveries appear and dissolve in synchrony with the glowing and fading of Goldin’s slides.

In his book and attendant exhibition, both called Friends of Dorothy, William Yang provides a diaristic and snap-happy account of Sydney’s queer community. For Yang, this ‘scene’ is political, communal, celebratory, and, above all, friendly. It is not defined by individual identity, rather, by whether one is, or is not, ‘Dorothy’s friend’, an expression deriving from the perceived campness of Judy Garland’s insouciant character in The Wizard of Oz.

Constructed like a bent paparazzo Bible, Friends of Dorothy chronicles 20 years of queer life and times in Sydney. There are sufficient Adult Concepts, Drug References, Nudity and Sexual Scenes to outrage prudes, satisfy voyeurs and mortify anyone attending a sauna at the same time as Yang’s surveillance camera. What this publication represents is a private diary in the form of a photo album, a genre that privileges implication, revelation and disclosure like no other.

Yang’s essential categories are the casual collective and the contrived portrait. In the former, he captures the mood of nightclubs, sex parties, literary gatherings, exhibition openings and the like. Many image, seem to reflect, or comment upon, the preoccupation that queer culture allegedly has with appearance, especially its own. In one series, Men, Yang presents frame after muscle­flexing frame of pumped-up egoists in bum-hugging shorts. Another, Lesbians on the Loose, conceivably addresses the codes of symbolic conformity inscribed so deeply on this sector of the queer community. Yang’s portraiture also tackles such concerns, with the sitters’ mis-en-scenes manipulated accordingly. In Couples, Yang depicts relatively young partners who frolic naked, accompanied by a biographical text. The mood is candidly sexual, suggesting a hedonism that another set of images, Homo Domesticus, entirely lacks. This series represents a number of queer couples sited in their bedrooms or backyards. All appear domesticated, slightly older, and more concerned with emotional intimacy than carnal display.

In ‘McQueer’, a recent article from Blue [issue 8, 1997], David G. Taylor argues that queer culture has become trapped by the necessity of certain commodities. According to Taylor, ‘It does appear that with existing gay ideology comes a whole series of unspoken commandments by which other homosexuals measure your gayness and worth.’ These ‘commandments’ are par for the course in Friends of Dorothy. Though Yang’s testament is a striking one, it does not match the power of his previous collection, Sadness, which documented the effect of AIDS on the queer community. In Friends of Dorothy, AIDS is a mere spectre that haunts the excess that constitutes the last 20 years of gay culture. The intimacies that Goldin preserves also depend on excess. One spectator at the MCA asked Goldin how she captured that moment, and her reply was simply, ‘Honey: I take a hell of a lot of photographs.’

Nan Goldin, Nan and Brian in Bed, New York City, 1983
From The Ballad of Sexual Dependency