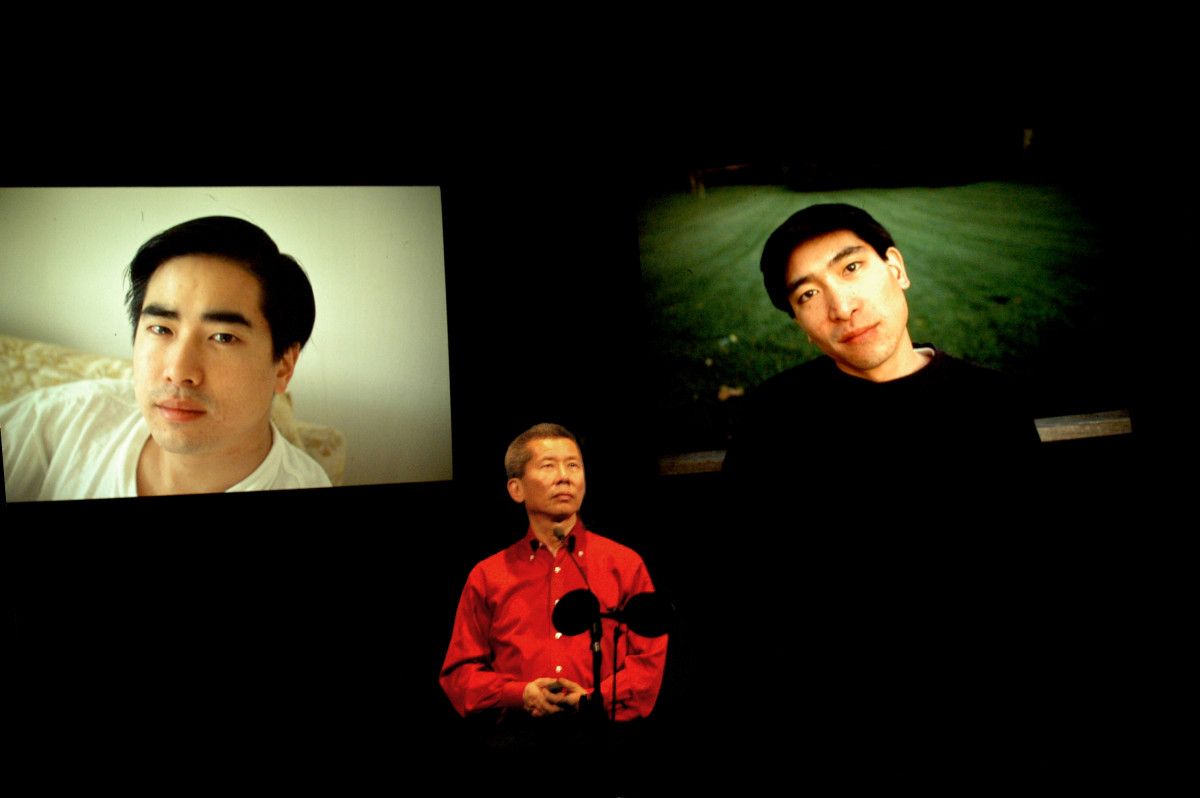 I can’t say that I actually remember when I first saw an image by William Yang. I say so because there is often a definitive moment when you remember someone’s work because of the impression it leaves, or the context in which it was experienced. The fact that I don’t remember is not such a bad thing, it just illustrates that Yang’s work is so firmly imprinted on the visual consciousness of Australian culture.

For those who may have missed this visual imprint, William Yang is a photographer and performer, most notably recognised for his slide shows The North (1996), Friends of Dorothy (1998), Sadness (1992) and now, Blood Links. Comprising monologues and photographic images, Yang’s work is noted for how it represents sexual and racial identities, family and community ties. Yang transforms the simple tradition of the intimate family slide show into a theatrical geography of documentary realism, primed by the nuances of his deadpan delivery.

In Blood Links, Yang claims “that many of us are far from our origins, but we exist in a place that transcends geography, we exist in a place of blood and other bonds”. Blood Links highlights familial, spiritual and cultural bonds, but its geography is significant and reads like a road movie, in that much of the time, images appear to be taken by the side of the road.

At one point Yang states that some of the most meaningful moments he experienced on his journey occurred in a car, like the time his sister fearlessly asked him about his HIV and relationship status, as if they were the same thing.

Yang’s journeys have taken him around the world, but in Blood Links his lurid images of Vegas or Paramount Studios particularly resonate because his confessional mode of visual storytelling is not unlike the “culture of confession” epitomised by American TV icons like Oprah. Yang’s work does not necessarily scream scandal in its honesty, but its anecdotal first-person perspective and documentary style impart a truth value not usually associated with most contemporary art practices, where imagined narratives and identity politics dominate.

Though Blood Links connects Yang with his family and cultural background, his documentation of gay communities in Friends of Dorothy or Sadness situates him as an artist always in the process of constructing identity, on both individual and collective levels.

In other words, identity is inscribed by Yang as culturally and historically specific. Even though a lot of Yang’s work examines his own personal history as a Chinese-Australian, he represents his history as a fragmented and discursive network that depends on the bonds of blood, but ultimately transcends traditional definitions of “family” through the incorporation of spiritual or sexual ties.

In Friends of Dorothy, Yang transformed nobodies into celebrities and sex parties into spectacles, as if he had Access All Areas stamped on his forehead. Yang writes in the introduction to the book version of Friends of Dorothy: “To take a photograph of an event as opposed to writing a document means that you have to be there. A writer can reconstruct after the fact by talking to others after the fact but visual information can’t be recreated in the same way.” Paradoxically, Yang’s account of post-Stonewall Sydney – in book form – is documented by a written as well as photographic account, where history is reconstructed out of lived experience.

Originally performed as a live monologue, Sadness is also about “being there” in that it directly pays homage to Yang’s Chinese heritage. But what makes Sadness a landmark of contemporary queer art is how Yang links his cultural background with his sexuality, paying home to friends and lovers who have died of AIDS. The representations of racial and sexual identities are linked by the common experience of grief.

Recently adapted into a film by Tony Ayres, Sadness (1999) still resonates on an emotional level and stays true to its original format of slides and stories, except Yang’s investigation into his ancestry is translated through stylised re-enactments. Considering Sadness is the story of a documentary photographer, this tension between staginess and realism may seem disconcerting, but ultimately it suggests that Yang’s narratives translate on theatrical levels. Yang’s storytelling is a form of oral history, which over time has the potential to lose its truth imperative.

Arguably, photographic representations are just as constructed as identity if we understand identity to be in a constant state of flux. The photographic image only reveals partial elements of truth and the real. If Yang’s vision of queer identity is so dependent on documentary realism and its truth imperatives, then it must also depend on the flipside of illusion, because after all, queer communities thrive on illusion. The mastery, then, of William Yang’s photography is how he visualises contemporary identity politics by capitalising on the tensions between truth and illusion, realism and theatricality.