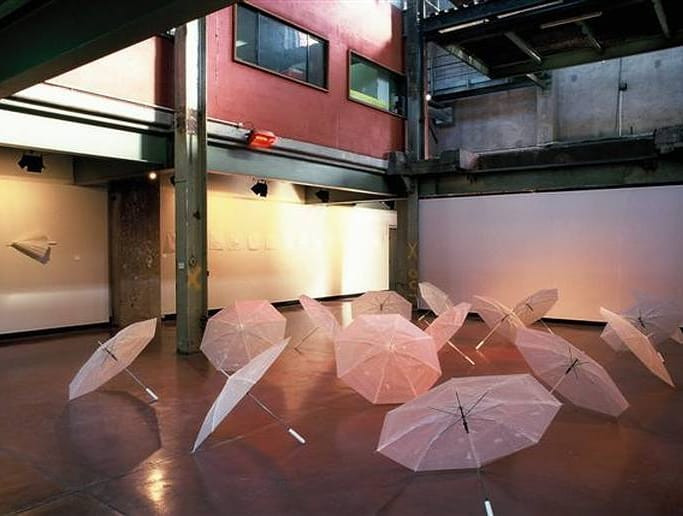 White the pastel sinks banally and invisibly into the camouflage of femininity, on a woman, a white woman... White is also, however, at the same time no color, the color of color’s own subtraction and absence... On women of all colors white refers, again banally, to virginity (to virginity as absence or to the absence of virginity) and the flirtations of the veil – to the ways in which our gender tries to construct us heterosexually as absence and as the dissimulating denial of it, and tries also to inscribe in us, as a standard of our own and other people’s values, the zero-degree no color of... the abstractive ideology of European domination.
— Eve Kosofsky Sedgwick

Eve Kosofsky Sedgwick’s comments on the dynamics of whiteness are tailor-made descriptions of the white pastel perfection of Karen Coull’s visual practice. The flipside of this pastel perfection is its inevitable disintegration. Just as whiteness can simultaneously come to symbolise death and disease. Domestic readymades such as scrubbing brushes, cheese graters, handbags and gardening tools are the surfaces that Coull has inscribed over time, all the while maintaining a minimalist approach, in that the surfaces of these objects, spaces and their relationship to bodies are meticulously framed through distance.

Coull’s objects embody all the broadsweeping pre-feminist models that define a woman engulfed by domestic passivity. Coull’s work is ordered and maternal; a description of her vocation could quite easily oscillate between “art-maker” and “home-maker.” Consistently framed by sparse, overclean surfaces, housed in shiny white gallery contexts, Coull’s work substitutes domestic bliss for terror. Coull takes up where Sproul left off. Australian artist Linda Sproul similarly “reads her body as sign: already coded through the colour of its skin, already there in white man’s history.” While Sproul investigates a specific and visible articulation of the white colonial body, Coull conjures up the white body through its very absence. If whiteness is “the color of color’s own subtraction,” it is both presence and absence, and moreover a signifier for both life and death.

Whiteness is paradoxically signified through these binaries in Coull’s work. All of Coull’s objects are highly pristine shells of domestic passivity that on the surface are meaningless and banal. It is only when Coull subverts them with her neurotic inscriptions and adornments of risk that they take on fresh meaning. In What Fresh Hell Is This? (1994) Coull adorns the handle of a broom with thorns, as in Soft Touch (1994) where a pair of silky white gloves are diseased by a thorny imprint. Is domestic labour merely a thorn in Coull’s side? On the one hand, whiteness is used to signify health and hygiene; class and race privilege. On the other hand, these signifiers of whiteness as absence are paralleled to western psychoanalytic notions that posit woman as a vessel of absence or lack, veiled by a masquerade of domestic subjugation.

In her work for Casula Powerhouse’s Parking exhibition, Keeping Yourself Nice (when dating a fast boy, in a fast car) (1996) Coull’s well-hung series of glove boxes resemble handbags, spilling ornate accessories like satin gloves, powder compacts and dental dams. Cool, to say the least, Coull’s Parking exhibit can be likened to female genitalia, arousing a series of trashy puns that evoke vaginal slang: ‘snatch,’ ‘box’ and ‘cunt.’ The corporeality of this work coupled with its good-girl connotations and fleshy skin tones liken it to the loss of virginity. The bags are white carriers that harbour all the associations of virginity in the way they are layered with both niceness and erotic puns. It is no coincidence then that whiteness quite obviously refers, as Sedgwick notes, “to virginity as absence or to the absence of virginity.” In this respect, Coull’s handbags allude to virginity more than they refer to sex in parked cars, because even though they are open (wounds) they prefer distance and embody Laura Mulvey’s spectatorial schema of “to-be-looked-at-ness,” rather than the “to-be-touched.” In other words, they are veritable cockteasers.

In her most recent work, Some Days Are Diamond, Some Days Are Gold (2000) Coull manipulates different corporealities. Again conjuring the body through its absence or fragmentation, Coull has constructed numerous organza pockets stuffed with chicken feathers arranged strategically around what she describes as the rugged masculinity of the Casula Powerhouse. Counter to these forms are umbrellas playing balancing acts with the organza shapes, and ultimately shielding an invisible entity (the artist perhaps?) from a potentially sinister threat. The organza is a translucent scrim of white that protects the feathers like a manufactured skin. Construed like a series of veils, these objects link the body to masquerade – “the flirtations of the veil.”

The visual surfaces and the very “thereness” of Coull’s objects and their social relations quite literally form a critique of femininity as an identity that remains invisible and, in effect, governed by patriarchal forces. The very being of Coull’s practice is also its very nothingness: its “zero-degree.’’ It is this nothingness and invisibility that marks her work as paradigmatically white. Coull’s work is (symbolically) invisible, because her objects reference the silent rituals of white middle­class homemaking. The value-added meanings that Coull ironically inscribes on these objects render them not so voiceless after all, but quietly menacing.

Though Coull usually employs simple domestic implements (brooms, cheese graters or even umbrellas in this current show), it seems as if she is commenting on the goodness of “white goods” without making explicit visual reference to such appliances. Coull transforms the aesthetic cleanliness of household whiteness for the terror that lurks behind or beneath such hygienic surfaces. If for Coull, some days are diamond, some days are gold, then a thin thread exists in her practice connecting safety with risk, and ecstasy with terror.

Published by Casula Powerhouse in 2000.