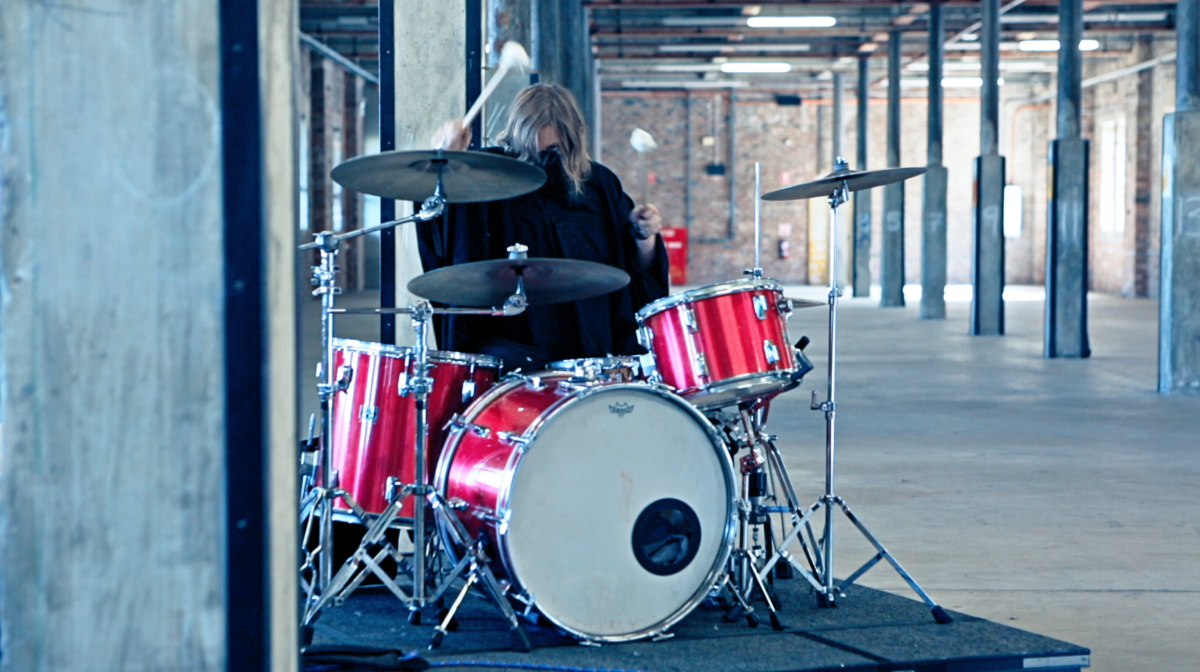 Tina Havelock Stevens, Thank You for Holding, 2021
Courtesy of the artist

Art spelled from the inside out is Rat – Bruce Conner, 1987

Pestilence and plagues go hand in hand. Historical accounts of the Black Death of the 14th century attribute the rapid spread of the disease to the bacteria carried by fleas on rats. Taking passage on the trade routes of Europe, the Black Death spread relentlessly across borders thanks to rat-infested ships. Long before planes were invented, the only way to travel the globe – and by implication globally spread a deadly virus – was by sea.

Art history is littered with horrific imagery where human carnage occurs on the rapids: conquest, colonisation and its consequences. Since childhood I have been haunted by a painting hanging in the Old Courts at the Art Gallery of NSW, depicting two bodies lying near-death on a barge in the Seine. The Sons of Clovis II (1880) by Évariste Vital Luminais shocked audiences when it was unveiled at the Paris Salon in 1880 for its grotesque account of parental abuse, where a cruel Queen punishes her sons by rendering them hamstrung and set adrift to their fate. Earlier in the 19th century, the famed icon of Romanticism, The Raft of the Medusa by Théodore Géricault, depicted a shipwrecked French frigate that had set out to colonise Senegal. Géricault heightens the anguish and trauma of its aftermath, where those of the majority that did not perish were pushed, rat-like, to cannibalism to survive.

For artist Tina Havelock Stevens, the past year made rats of us and sent us out to sea. While adrift we were forced to pause; time played tricks as our routines were interrupted by the uncertainty of life in plague time. The steady time signature of daily life slipped into a chaotic and unscripted rhythm; the elements closing in.

With an appetite for the apocalypse, over the last decade Havelock Stevens has formed an art practice that explores the big picture ambiguities of the human condition. Responding to personal narratives in public, her work speaks to fragility and survival by drawing connections between historically loaded sites and emotional spaces.

Drawn to the power of elemental forces, her work is frequently charged by water and wind as the stage for performances where she ‘drums’ the location. For Reading the River (2017), Havelock Stevens drummed on a suspended platform under water after being lowered by a crane into the murky depths of the Derwent River. The Aguan River in the Philippines is the setting for The Rapids (2019) a cut-up drumming performance that incorporates archival footage interspersed with clips from Apocalypse Now, Francis Ford Coppola’s iconic 1979 film that had featured the same riverway. In Future Windy Trees (2020) and Thunderhead (2016) Havelock Stevens momentarily rests the drumming figure, animating dramatic scenes of wind and storm.

Havelock Stevens conceived Thank You for Holding amidst the relentless tides of anxiety and winds of change that characterised 2020. Performed in The Clothing Store at Carriageworks last August during the last stretch of her studio residency, her work frames this moment through a filter of timelessness, uncertainty, and hope. Presented as part of Sydney Festival in January 2021, Thank You for Holding extends her fascination with water and wind as metaphoric devices to examine and refract the extreme present and recent past.

In it she drums on a raised platform – a raft drawn from pillar to post by her co-performer, Ivey Wawn. Pulled between the 20 architectural columns holding up the building – ten on each side – Havelock Stevens sees Wawn as a psychic extension of herself, “acting as my unconscious or a handy representation of my will”. As Wawn numbers the columns in chalk, the narrative suggests the passing years of the 21st century, as much as the non-linear editing reflects the vacuum of time and its phenomenological capacity to bear down as its ebbs and flows, speeds and slows. Adrift on land, the two masked performers navigate the rhythms of uncertainty and the chaos of loss and change. Reflecting on the power and precarity of human existence, her drumming is a ritual action in constant fluctuation and flow – as much as a river, as much as life itself.

Improvised and urgent, her drumming score reverberates off the architecture, creating a sonic sense of place. As an installation in the gallery of Bay 21 at Carriageworks, Havelock Stevens amplifies the score using a quadrophonic sound design to enable auditory immersion. Set at rock concert levels the sound echoes throughout the entire building – listening at a distance from the gallery, it could be mistaken for rolling thunder or a cacophony of nearby trains.

When The Rapids was presented at the Museum of Contemporary Art as part of The National 2019: New Australian Art, a ply mini-grandstand was installed for viewers. In Thank You for Holding, the coffin like bleachers are repurposed as the makeshift audience of none. During her Clothing Store residency, the seating bank lived in her studio, opposite her desk. “It was a constant reminder of the push and pull between my private and public self and as a mirror for this game of life,” she says. “I often look at this ‘monument’ while I ponder any number of things and now my invisible audience is compounded by the impossibility of assembly.” As audiences disperse and disassemble for collective safety in a pandemic, the band plays on, solo.

Thank You for Holding begins with the empty grandstand introduced as an ominous sculptural shrine. After being guided through the space by Wawn, the action concludes back in front of the empty benches. Havelock Stevens is left alone as Wawn exits for an encore like finale where the drummer, now unmasked, continues on. Oscillating from mid-shots to closeups, the camera becomes distracted by a small tunnel-like formation in the wall adjacent to the floor, a “cartoon rat hole,” she calls it. “A windy other-dimension where I drum up a storm in all optimism.” And hopeful it is. Despite being initiated by solitude and sadness, Tina Havelock Stevens pauses for gratitude and play. An opportunity to give thanks despite the circumstances.

Curatorial essay originally published online as 'Year of the Rat' for Thank You for Holding at Carriageworks, 6 – 24 January 2021.

Published by Carriageworks in 2021.