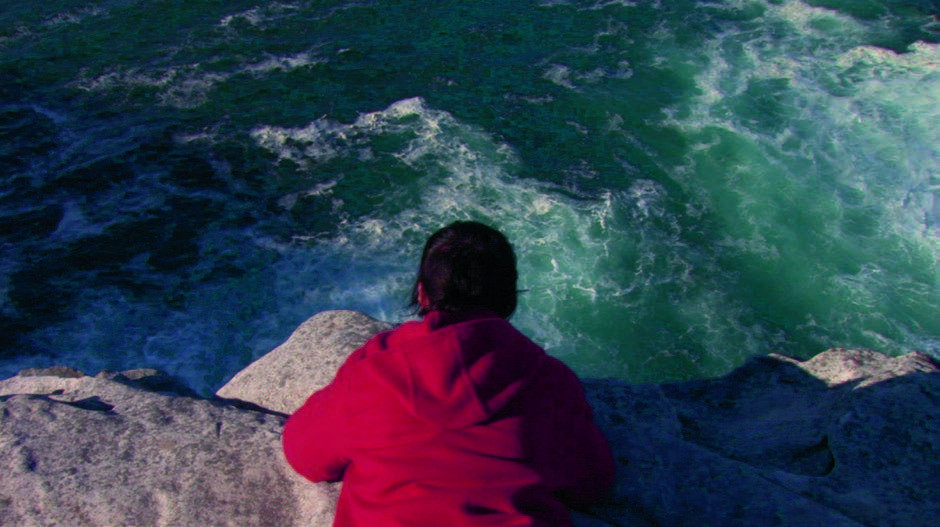 Vertigo derives from the Latin word vertōm, which means ‘a whirling or spinning movement.’  It occurs when one experiences a feeling of motion or dizziness when stationary. Balance compromised by disequilibrium. Unlike acrophobia, which refers to the irrational fear of heights, true vertigo can happen at any time and occurs during shifts in visual perspective – for instance, a stationary figure looking out the window of a fast-moving train.

Fiona Kelly McGregor confronts her fear of heights in the endurance performance Vertigo (2009). From morning to night, the artist lies on her stomach at the edge of a cliff at Bondi facing the sublime of the sea. The performance is documented for video and cut down to almost 5 hours in duration, making the gallery viewing experience a similar feat of endurance. But in endurance there is contemplation – an invitation to excavate the buzzing hyperstimulus animating our busy brains. As the silence settles over us, so too is it interrupted with the potential for more noise – the everyday life shopping lists of mostly useless information that keep our heads bustling with too much information. Then silence again.

Todd McMillan’s By the Sea (2004), which sees the artist referencing a Caspar David Friedrich painting by standing at a Bondi cliff, is evoked but not referenced (McGregor was not familiar with this work). Where McMillan reduces some 12 hours into a minute or so via time-lapse, McGregor emphasises the significance of (real) time. In that very slowness comes enlightenment, whereby she faces her fear while also critiquing the aesthetic and political meanings we inscribe on land and sea. The coastline, like a great irreducible fortress or wall, is an ominous signifier of limitations. McGregor notes, ‘When planning Vertigo, I never considered the coast a place of oblivion or freedom. It was to the contrary a place of restriction. A border, impassable.’ The image of a solitary body stretched out and surrendering to the edge of the landscape reveals the vulnerability, limitations and fleeting insignificance of the body. This coast was here before us; it will be here when we pass.

What can change is the way we give it meaning.

Published by MOP Projects in 2011.