Essays, Articles
Things in the World
on Todd Robinson 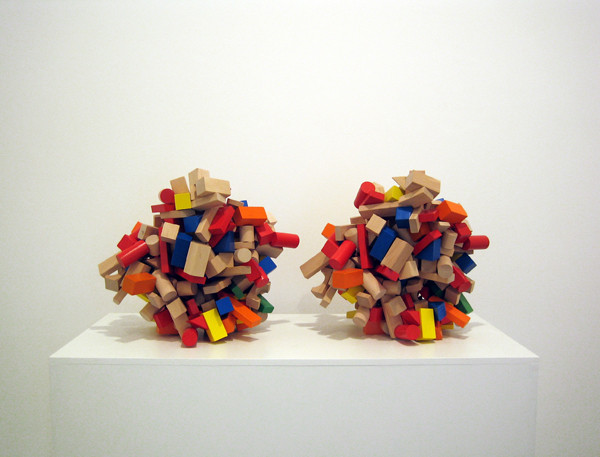 On the one hand, there is the disposition of things - their condition, configuration and structure. On the other hand there is force and movement. The static versus the dynamic. But this dichotomy, like all dichotomies, is abstract. It is a temporary means for the mind to represent reality, one that simplifies as it illuminates. The question we should thus ask is: What of that which, stranded between these two terms of the dichotomy is consigned to inconsistency and, as a result remains largely unconceptualized even though we sense that what is at stake here is everything that really exists?
— François Jullien, The Propensity of Things

Todd Robinson unpicks readymade objects revealing their ideological processes and meanings. Once disassembled he puts them back together with meticulous precision despite the seemingly random appearance of the sculptural outcome. Embedded within the functionality of a designed world of things are hidden processes, obscured meanings. Untangling functionality, Robinson identifies and questions the designed object’s lurking logic of process by recasting its materiality in duplicate as representations about process.

Robinson plays with the idea of process in his exhibition Twice at MOP Projects (March 2008) through repetition. His sculptural methodology rigorously exacts a repeated process of forming two objects of identical parts, knitted together in an indistinguishable order. In an age where mechanical reproduction has been largely superseded by the a looped parade of simulations and illusory sensations, Robinson offers up the idea that the copy is not so much a copy of a copy of a copy, but, rather, the copy bears the same DNA as the original much like the duplicate is a kind of twin. Hand-made and serial in nature, these copies bear no relation to the mechanical or digital ease of reproduction or simulation. They are, as he claims, variations of each other and “within each an instance of the other exists.”

If Robinson’s sculptures were human, they would be twin siblings parented by Frankenstein and Warhol. An action repeated once affects these sculptural body doubles, imbuing them with a serial personality that is animated throughout the process of creation and concealed once complete. Robinson’s sculptures negotiate repeated labour by simultaneously emphasising and concealing the means of production like a form of commodity fetishism that never realises its obfuscation of process over the lure of connotative invention.