Reviews, Profiles
The Chick with the Leak
on High Art 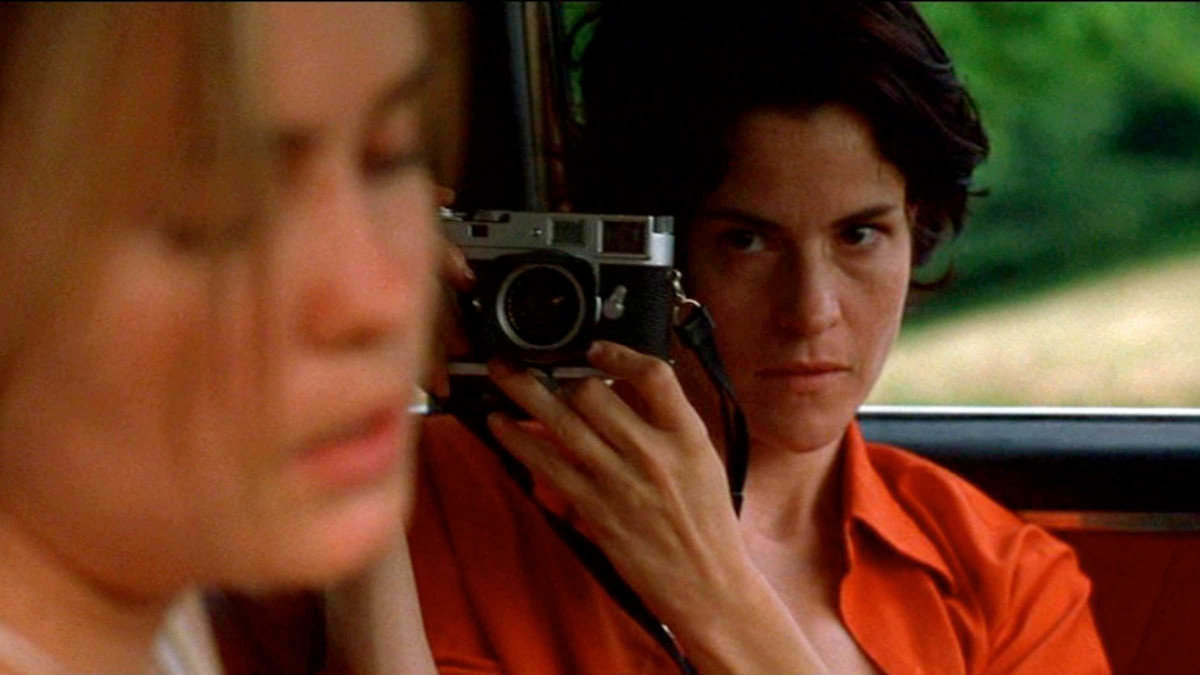 When she returns home from work at the photography journal Frame, Syd (Radha Mitchell) sits on the toilet, her gaze drifting toward the ceiling. Conversing between rooms with boyfriend James (Gabriel Mann), she agrees to a martini. The scene cuts to her in the bath, as her gaze returns to the ceiling, except now it’s because of a leak. It’s too late to call the super, and too expensive to get a plumber.

Syd decides to investigate. Upstairs, she asks, “Are you running a bath?” No, says Lucy (Ally Sheedy), “Are you?” Already, there’s electricity sparking in High Art. And already, it’s clear that first time director Lisa Cholodenko — who wrote the script while a grad student at Columbia University — will be emphasizing water (baths, leaks, pipes), as it connects to queer notions of “fluidity.”

In this upstairs apartment, Syd is introduced to Lucy’s tired glamour and drug-fucked world. Greta (Patricia Clarkson), a former Fassbinder actress, is central to this milieu (“I’m Greta,” she introduces herself, “I live for Lucy”). When Syd turns up at Lucy’s a second time, Greta refers to her dismissively as “the chick with the leak.” Syd is partly drawn to Lucy because she was once a famous photographer, a situation that allows Syd room to flex her art theory vocab and namedrop Barthes and Derrida. “I haven’t been deconstructed in a long time,” says Lucy. The reason being: her art long ago lost out to a heroin habit that has become occupational. Lucy’s uninspired recent work consists of Greta shot underwater (more “fluid” imagery) and snaps of Lucy’s anti-Greta mom (Tammy Grimes).

Taken by still photographer JoJo Whilden, Lucy’s images show a documentary realism similar to Nan Goldin’s work. In her commentary (the only feature on the DVD), Cholodenko says that audiences and critics felt High Art was riffing too heavily on Goldin’s life and work. Cholodenko doesn’t entirely deny the parallel; in fact, she points out that, among other notable artists like Jack Pierson and David Wojnarowicz, Goldin “donated” one of the art images adorning the walls of the Frame office.

Frequent references to the contemporary New York art world suggest that it’s comprised of competing and often intersecting forces: a slick, corporate system is pitted against underground, romanticized drug cultures. When Syd pitches Lucy’s work to Frame, the editors jump at the chance to revive her career by offering her the cover. As executive editor Dominique (Anh Duong) puts it to Lucy, “You have a cultural currency we’d like to explore with you.” The artist mocks such language and attitude. Reluctantly, she takes the assignment, but only if Syd is her editor.

Sealing their working relationship with a long overdue first kiss, Lucy and Syd are interrupted by Greta’s overdose, in the same bath that had leaked into Syd’s apartment. (Along with the underwater photos, Greta’s near-death experience cements Cholodenko’s reference to Greta as a “washed up actress.”) Syd resuscitates her, her first kiss with Lucy ironically sealed by Greta’s rescue operation. Syd returns to her downstairs apartment drenched, and James suspects Lucy made her wet. Indeed, as the film was shot during a New York heat wave, Cholodenko notes that the sweat frequently visible on Sheedy and Mitchell is real. Where other lesbian-themed films might ride the sweat-stained cliché for all it’s worth, Cholodenko instead shows restraint, offsetting Lucy’s world-weary, sexually fluent “top” to Syd’s straight nervousness.

High Art‘s murky, sweat-stained atmosphere is most authentic during the frequently claustrophobic drug binges in Lucy’s apartment. During these scenes, Tami Reiker’s cinematography blurs edges, moves slowly, and heightens color. Bytes of loopy, “improvised” conversation share audibility with Shudder to Think’s brilliantly minimal electro-trance score. Along with the stoned performances — of which Clarkson’s tragicomic Greta is a highlight — the cinematography and music simulate what Cholodenko calls “a heroinized affect.” (During her commentary, she frequently uses the words “affect,” “affecting,” and “affected”).

Most “affecting” is the way High Art still holds up as the most accomplished queer film made in the late ’90s. Considering the early part of the decade saw an independent wave of New Queer films that was barely sustained later, I would argue that High Art was the last sophisticated indie queer film, and certainly superior to Cholodenko’s uneven studio follow-up, Laurel Canyon (2002). Queer quality aside, Cholodenko must also be commended for casting Aussie Radha Mitchell in her first international role, and for staging Ally Sheedy’s comeback, however brief it turned out to be.