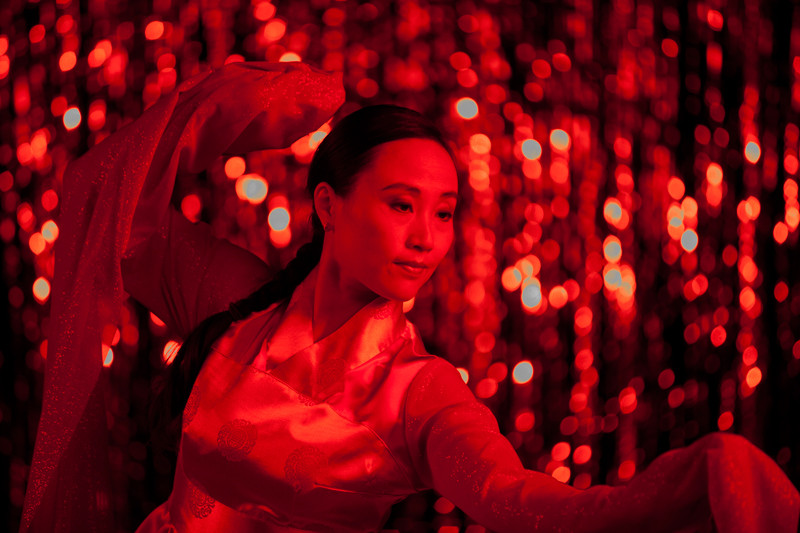 Community engagement is easier said than done. That doesn’t stop many cultural institutions boasting community-focused programs regardless of whether or not anyone is engaged at all. Unless, of course, ‘engagement’ (or ‘preaching to the converted’) begins and ends with an already adoring (or ‘jaded’) microcosm better known as ‘the art world’. Regional galleries especially rely on engaging communities, knowing their audiences are primarily trafficked from the local ‘hood. A triennial funding application certainly wouldn’t be worth its weigh in A4 paper if it didn’t acknowledge the role galleries/museums play in building and sustaining a real-world idea of community that is forever dynamic, responsive and shifting.

Speaking broadly, major public art galleries/museums in urban centres don’t have to try as hard to engage the nebulous ‘out there’ of the ‘burbs. The mass pull of blockbusters and the lure of tourist dollars grease the wheels enough to create an illusion of community engagement. With this in mind, the Museum of Contemporary Art is to be commended for developing a long-term partnership in 2006 called C3West, which fosters ‘new ways of working between cultural institutions, artists, businesses and communities in Western Sydney and beyond’. The three C words refer to Community, Contemporary Art and Commerce. Partners listed on the MCA website include Campbelltown Arts Centre, Casula Powerhouse Arts Centre and Penrith Performing and Visual Arts. Developed during a time when Western Sydney was on the radar for funding bodies, C3West began with the Centre for Cultural Research at the University of Western Sydney as a founding research partner through an Australian Research Council Linkage Grant. It’s hardly surprising that many would greet C3West cynically upon inception given UWS controversially demolished its art school at the same time it was boasting a partnership with the MCA.

Five years have passed since C3West has formed. Artists including Ash Keating, Sylvie Blocher, Hossein and Angela Valamanesh, Jeanne Van Heeswijk, and Craig Walsh and have to varying degrees of success and exposure developed C3West projects under the curatorial guidance of Abigail Moncrieff and, more recently, Anne Loxley. The most recent C3West project goes ‘C3South’ with Hurstville City Council partnering on Angelica Mesiti’s The Begin-Again – one of the most visually stimulating and culturally rich celebrations of community I have witnessed in recent times.

For two nights only, on 1-2 April, Mesiti brought the streets and laneways of Hurstville to life with four video projections and a live performance. Having spent most of my childhood in Hurstville, I was keen to attend and even brought my mum along so we could marvel at how much Hurstville had changed since we left there in the mid-1990s. The strength of Mesiti’s work was that it tapped into the ‘anxieties of change’ communities experience when rapid social and cultural transformations threaten to eclipse local stories and histories. Before even encountering Mesiti’s projections, Mum and I were transfixed by how much Hurstville’s CBD had changed and developed in the last two decades since we moved. It wasn’t at all the Hurstville of my youth – some of the charm was lost but surely my conception of ‘charm’ in this instance is an unreliably subjective nostalgia that attaches itself to memories of childhood.

The four videos in The Begin-Again steered clear of nostalgia’s potential for mawkishness by contrasting a local cast of children with older members of the community, effectively balancing the yearning of looking back with the optimism of looking ahead. Placed in Memorial Square on Forest Road, the first of the videos, Old Man River, captured 85-year old tenor Vince Lemon singing the song made famous by the 1927 musical Show Boat. Accompanied by a pianist on a stage shimmering with a blue tinsel backdrop, Lemon’s heartrending performance captured an overwhelming sense of loss and sadness that one faces at the end of their life, while beautifully acknowledging the fact that life like its many rivers, rolls on regardless. Despite originally referring to the Mississippi River, Lemon’s performance inevitably evokes the neighbouring Georges River. In an interview for the ABC, Mesiti explained: ‘I was thinking about the song Old Man River because we’re on the Georges River here and it was kind of a song about this indifferent natural environment you know – it just continues regardless of how we suffer and how we feel; and so it’s kind of a song about these cycles that just continue’.

This ode to the natural world segues into one directed at technological progress. Trains Approaching is situated a bit further up the road near the Bus Interchange entrance to Hurstville Station. A group of children garbed in colonial dress enacted the construction of the city’s first train line in the 1880s. The train has long been regarded a key motif of modernity and has a particularly strong legacy in relation to the development of the moving image. (Think the Lumière Brothers’ icon of early cinema, Arrival of a Train at La Ciotat from 1895, and the supposed audience reaction of horror at seeing a train approaching on screen). Mesiti’s set is bathed in fluorescent blue light, heightening the whiteness of the building blocks used to create the rail line. As the children complete their task they form a kind of conga line to mimic a steam locomotive, the action climaxing as they kick away the rail line they built (the Hurstville train disaster of 1920 is evoked, even though the artist was unaware of the incident).

The video trail continued with Dance Hall projected in Diment Way, a lane that connects two main roads. The work presented a troupe of senior citizen ballroom dancers performing against a lantern-like cityscape built by kids from the community. Like the other works, its dreamlike quality suggests a world of the past supplanted in the here and now, or perhaps the hereafter. It loops infinitely with a seamlessness that suggests the capture of certain spaces in time.

The last of the four videos, Water Sleeves, was projected around the corner in Humphreys Lane. A former member of the Shanghai Ballet, Lucinda Lu, performed a traditional Chinese dance where the long silk sleeves of her costume cascade in fluid formations. Visually sumptuous, Water Sleeves was let down by being devoid of music – all four videos have such a strong almost pantomime-like musicality so it was surprising Mesiti should opt for silence. The engagement with Hurstville’s ever expanding Chinese population continued in Parking Lot Dragon – a performance staged each hour on both nights in the Westfield carpark. The Chinese New Year Dragon danced among a cluster of customised cars billowing smoke-machine smoke, their car radios blaring a montage of hip-hop tracks. As entertaining as it was, the elegance, simplicity and polish of Mesiti’s videos certainly stole the show making the trek down south worthwhile.

The Begin-Again successfully tapped into the here and now of a rapidly changing place while acknowledging a longing for the past experienced by aging members of a community that continues to grow and diversify in multicultural terms. Angelica Mesiti deftly balanced this dreamy glow of nostalgia with the kind of sanguinity instilled in children about what futures can hold when opportunity is embraced and community is engaged. 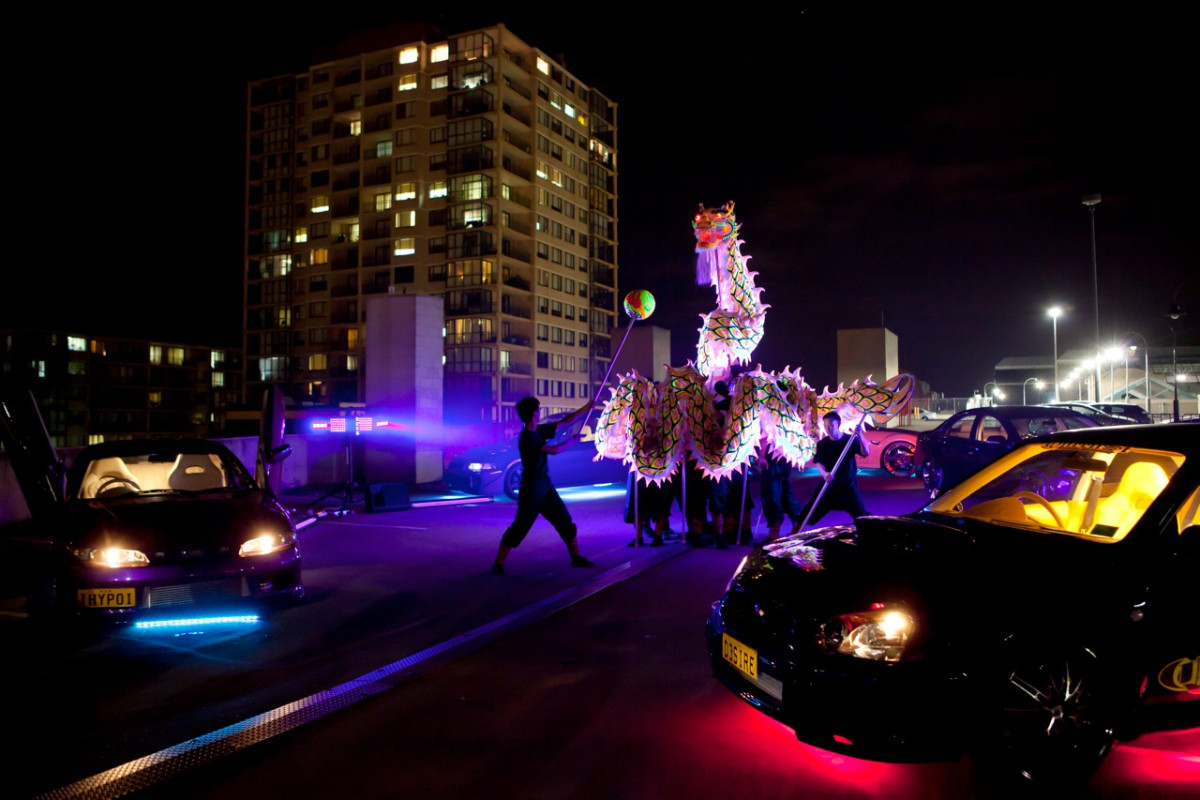