Essays, Articles
The Architecture of Dreams
on Luis Martinez 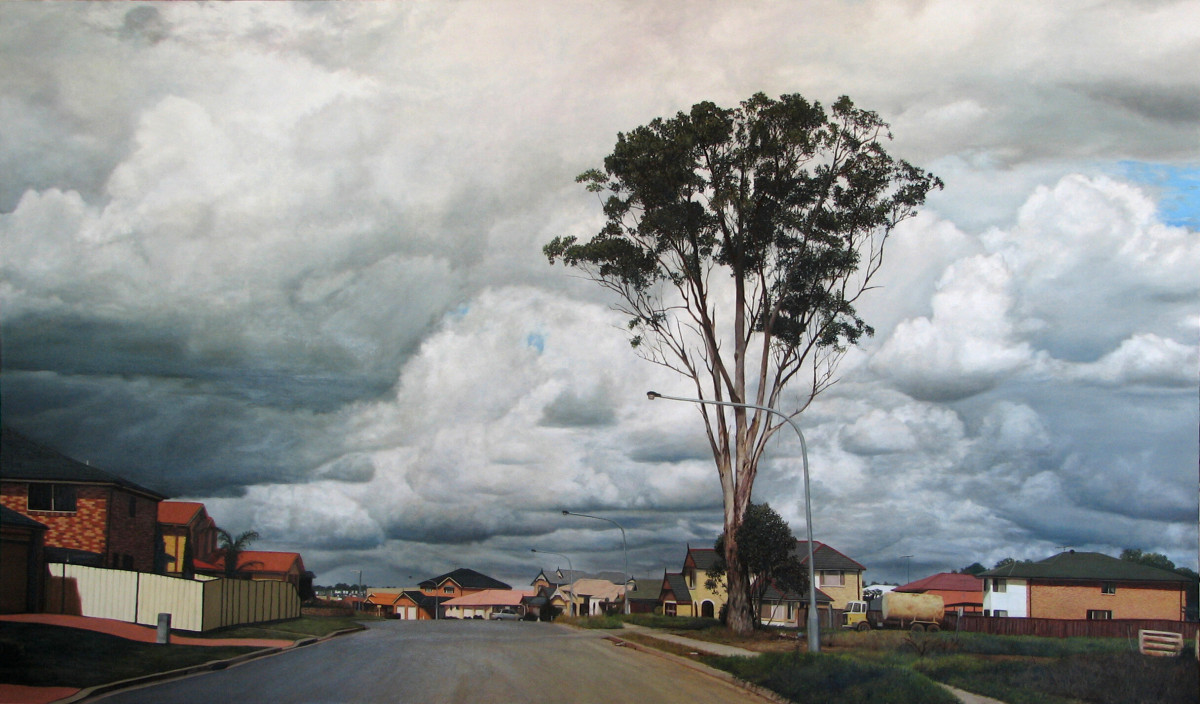 All I ought to say about my childhood home is just barely enough to place me, myself, in an oneiric situation, to set me on the threshold of a day-dream in which I shall find repose in the past.
— Gaston Bachelard, The Poetics of Space

It is not at all uncommon to describe houses as storehouses of memories and dreams. The houses in which we lived as children are often romanticised as adults, the settings for recurring dreams. Personally speaking I don’t have one recurring dream where all the narrative action is endlessly repeated and projected on some intangible unconscious screen. Rather, the recurring dream is defined by the unremarkable suburban house I lived in during my high school years. Whatever takes place in these recurring dreams is always forgotten in that elliptical time between deep sleep and groggy awakening, where the content of dreams quickly melt into air but returns when prompted throughout the day by uncanny and fragmented remembrances of the dream. Seizing upon specific characters or narratives represented in these dreams is near impossible, but the setting of that childhood house remains consistent enough for me to know that my adult self cannot let go of my childhood’s symbolic parameters, bounded as it is by a domestic architecture of memory and dreams.

For Luis Martinez, the suburban house functions according to the workings of memory and nostalgia. In the same way that historical buildings are appreciated for what they preserve of the past, Martinez represents the type of suburban Western Sydney houses in which he grew up as symbolic monuments of personal history. The inspiration for this body of work is to retrace the artist’s past, mediating memories of childhood experiences through paintings, drawings and photographs. As contextual research for his work, Martinez walked and rode his bike around these suburbs, documenting places from which he had long since departed in order to match his memories of the past with his now grown-up perception of present reality. Capturing the suburban landscape with wistful verisimilitude, Martinez excavates the visual surface in order to reveal the lurking emotional undertones. Divested of their human inhabitants, the houses become signifiers of human presence, their very domestic structure assigned human qualities in the absence of visible life.

Gaston Bachelard famously anthropomorphised the house in his landmark book The Poetics of Space. Bachelard wrote about the “oneiric house,” a multi-storey domicile that represents aspects of human consciousness. Basements, for instance, are latent storehouses for repression, while the attic accommodates heightened mnemonic traces. The levels enclosed by attic and basement give shelter to the manifest conscious activity of the everyday. The word oneiric is literally suggestive of dreams. Martinez depicts an oneiric landscape that is not so much asleep as inhabiting a perpetual waking dream that blurs dream states and waking periods, dawn and dusk.

Though he captures a number of multi-storey houses, most of his works depict fairly ordinary single-storey dwellings. Designed according to the logic of function and utility, Martinez’s houses are primarily united by the common denominator of commonness. Unlike houses located in more affluent locales which compete for our ocular attention, these houses would not necessarily register a second glance had they not been represented in such romanticised terms.

The romance evident in Martinez’s work is accorded to a landscape that could be set anywhere. These paintings make no specific claims about Blacktown or even the suburban sprawl of Western Sydney. Drawing inspiration from memories of his life in the western suburbs, Martinez’s aim is not to specifically retell a story of his life, or anybody else’s life, but instead for each individual image to capture the emotive qualities of such scenes. In a sense, then, emotion becomes manifest as a shared dream. Dreams are never universal in content, but because they often take similar form, Martinez’s work will no doubt evoke similar responses from viewers observing their own memories of suburban space. Dreams amplify the romance of the past by placing memories within an architectural frame. The architecture of dreams, therefore, depends on a dreamer open to the reveries of the home. It is when we dream about the house that it indeed becomes a home.

With the heightened drama of romanticism comes a certain kind of terror. What exactly is going on inside these homes? What horrors might be taking place behind closed doors? Aiding the sense of suburban terror is the ominous skyscapes circling overhead, the painterly sublime of nature providing a stark contrast to the sterile serial repetition of the box-like houses. Bachelard writes, “A house that has been experienced is not an inert box. Inhabited space transcends geometrical space.”2 The experiences contained in these inert boxes are suggestive of terror because we are invited to join Martinez in the voyeuristic practice of gazing at houses whose inhabitants elude us. In their absence our imaginations can run wild, fueled by the aesthetic and emotive intensity of Martinez’s nostalgic romanticism. As if parked across the street with a set of binoculars, the implied viewer is engaged in an aesthetic stakeout, anticipating visual access to something terrifying or salacious, disrupting suburbia’s humdrum patterns of routine.

Certainly, routine and the related idea of repetition are aspects of this suburban dreamscape that Martinez captures best. Specifically imaged here in ideological terms is the Australian dream: the ideal of social ascension being part and parcel of home ownership. Individuality is enacted through home ownership as we customise our houses to signify our identities. The built environment of the suburban milieu, however, is based on the repetition of self-same domestic structures for as far as the eye can see. How is it possible to convey individuality when the architecture of suburbia depends on repetition and routine? By subscribing to the ideology of the Australian dream we run the risk of participating in serial conformity. What Martinez brings to this contradictory ideology is an impression that contained within such habitual configurations of suburbia is opportunity for the kind of reverie and repose Bachelard invites. Martinez restores a sense of uncanny wonder to the suburbs, engaging the viewer to look closer and resist being trapped in the echoes of repetition contained therein.

When mention of the Australian dream is uttered, the historic 1950s connotations of this modern concept are inevitably suggested. With visions of such a past come the dominant cultural suggestion that those with special access to this dream are white Australians populating the suburbs with their white goods and picket fences. That the Australian dream is actually multicultural in its application is evident in the way suburban landscapes have become increasingly defined by fertile ethnic and racial community formations. Certainly the migrant dream of establishing roots in a land described as “the lucky country” or a “land of opportunity” is evoked in Martinez’s work and is specific to his own experience. In the mid-1980s, the Martinez family migrated from El Salvador and moved around various Western Sydney suburbs. While his family or any other people are not depicted in the work, the suburban sprawl certainly brings to mind the multicultural concentrations populated there. While it is not uncommon to regard suburbia in undervalued and mundane terms, it is very much a romanticised ideal in the migrant imagination.

The tensions between dream and reality that underpin Martinez’s work are significant on aesthetic, social and psychological levels. Taking cues from pastoral romanticism, Martinez makes magic of the mundane, while avoiding the coolly ironic detachment of much postmodern irony. Instead, Martinez offers warmth and sentimentality, with enough of a hint of lurking psychological terror to prevent the scene from becoming mawkish. To retrace one’s upbringing is always a risky endeavour because looking back accentuates the elliptical and unreliable nature of memory. Like a suburban flâneur going back over the verdant soil of his past to make sense of a present day relationship to place, Martinez visualises the built environment of a waking dream that delicately hovers between consciousness and sleep.

Again, by looking at Luis Martinez’s work, I can’t help but contemplate the relationship I have to the suburban house of my childhood. Having left over a decade ago, I rarely now pass through that particular place without feeling compelled to drive by the house that defines my dream life and see how it may have changed or stayed the same. Something always prevents me from doing so for fear that the dream may not – indeed never did – live up to the romantic architecture of dreams.

Published by Blacktown Arts Centre in 2006.