I first met artist Katthy Cavaliere in 1997 just after she had just completed her Masters at what was then called the College of Fine Arts (COFA) at the University of New South Wales. I was doing Honours at what was then called University of Western Sydney (an art school that no longer exists). For her MA presentation Katthy made Frederick Street – conceal, a series of large C-type photos returning to her childhood home.

The fact that Katthy and I even met is remarkable given we moved in completely different circles specific to the art schools we attended on polar sides of Sydney.

How we met: the arts publication Realtime (which also no longer exists) asked me to review the Sydney grad shows, late 1996. At COFA I focused on Katthy’s work as an exhibition highlight.

Realtime rang Katthy’s landline number, requesting slides of her work for reproduction. They gave her my number and she called me up. But I wasn’t home, so she left a message, early 1997.

Only recently, did I find a box of micro-cassettes in my archive which had been used for my landline answering machine in the late 90s. I digitised the tapes and got the recordings back recently. I was largely unaware of their contents, but knowing there would be many voices of the past, some long gone through faded friendships or death. Hearing Katthy’s voice among the messages – her otherwise banal message now imbued with so much importance as it is the origin of our connection, one that continued in life and now in death.

When I called her back, it turned out that she lived in Rockdale and I lived in the neighbouring suburb, Carlton. So she dropped some slides off at my house and I still remember the awkward conversation we had on my doorstep in January 1997.

As it happened, Realtime cut the article, so it never ran. But what did run was a lifelong professional and personal relationship with Katthy, that especially flourished during the time I was curator at Hazelhurst Arts Centre and co-director MOP Projects (another gallery that doesn’t now exist).

One of the last times we hung out was like the first, Katthy on my doorstep. This time in Kings Cross in 2008, not awkward but instead a bit drunk and dishevelled after we’d spent a large chuck of the evening dancing to Prince songs. She was dressed in a Wonder Woman costume. For no reason. 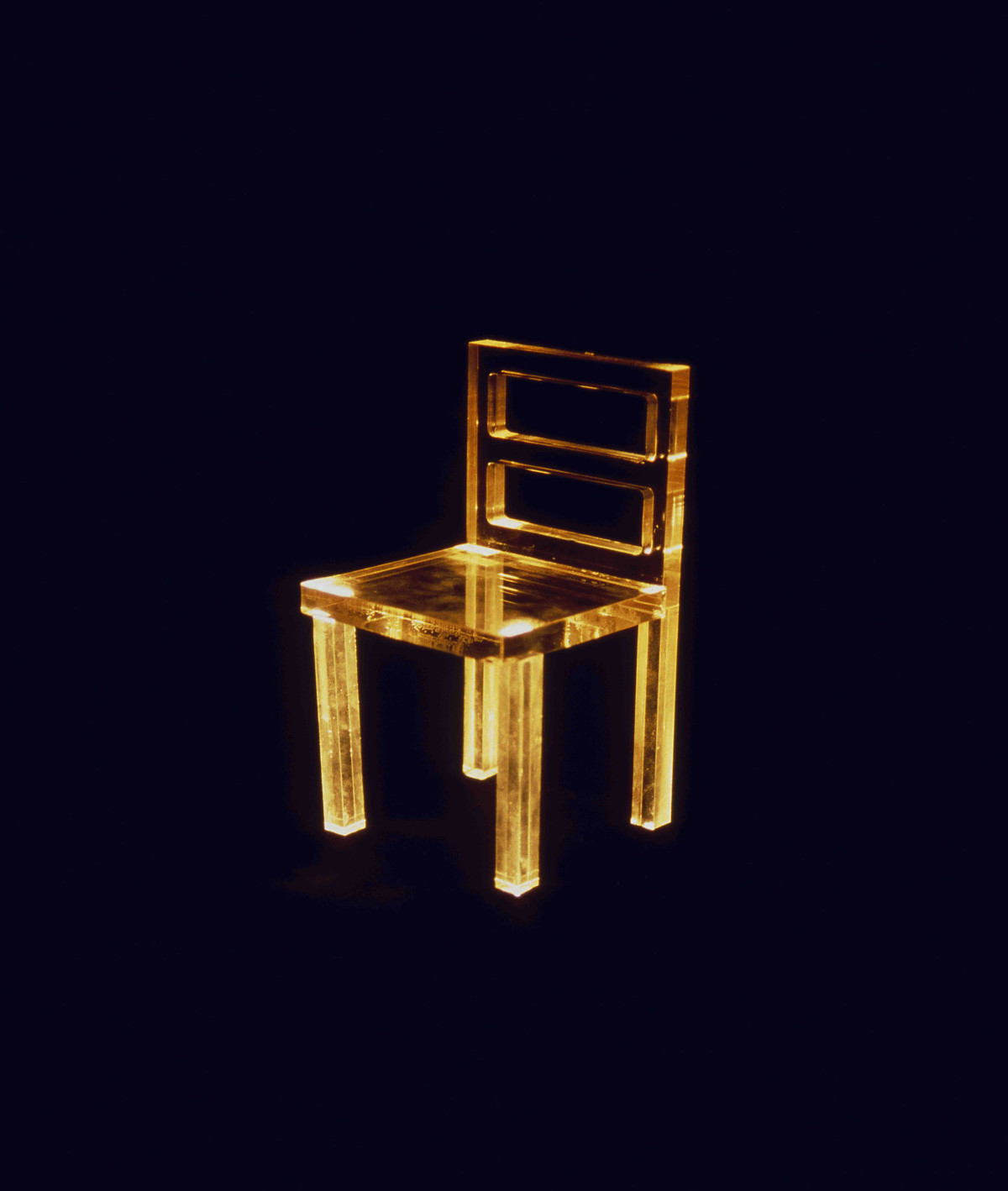 Katthty Cavaliere, suspended moment, 2000
Courtesy the estate of the artist

But rewinding back to the early days: Four years after Katthy completed her Masters at COFA, in the year 2000, she was a finalist in the Helen Lempriere Travelling Art Scholarship exhibition at Artspace in Sydney, with her work suspended moment taking out the prize.

This big break through the Helen Lempriere Prize, arrived for Katthy after a significant period of hardship and difficulty, enabling much craved professional and personal renewal. Returning to Italy for the first time since migrating to Australia at four years of age, Katthy’s travel brought new opportunities, networks and important foundations for new work.

Five years later a survey exhibition of her work, aptly named Suspended Moment, was touring to three New South Wales regional galleries (Goulburn, Bathurst and Campbelltown) through Museums and Galleries NSW (MGNSW). At Goulburn she developed the Rag Doll persona that would develop into the performance work you see here today. And at Bathurst, she made the camera obscura works after residencies at Hill End. The tip you see in the Loved video was at Hill End. Working in these regions turned out to be fruitful for her as an artist, enabling what are now some of her most iconic works.

After Katthy’s premature death, now a decade ago in January 2012, I was tasked by her Estate to plan a posthumous exhibition and book of her life’s work. Named after another of her now iconic works, the exhibition Loved was staged at the Museum of Old and New Art in 2015 and toured to Carriageworks the following year. As it wrapped, Katthy’s Estate again tasked me to plot an opportunity in her name, funded by the sale of her family property.

And that is how Suspended Moment was reborn. This time as The Katthy Cavaliere Fellowship, a major new artist endowment honouring her legacy, executed in partnership with three major institutions: Australian Centre for Contemporary Art (ACCA), Carriageworks and the Museum of Old and New Art (Mona).

Following a competitive call for expressions of interest, Suspended Moment: The Katthy Cavaliere Fellowship was a one-off opportunity that provided three grants of $100,000 each to three Australian women artists working at the nexus of performance and installation, for the purpose of realising an ambitious new work. The recipients – Frances Barrett for ACCA, Sally Rees for Mona, and Giselle Stanborough for Carriageworks – have each had a momentous opportunity to take their practices to the next level by delivering on ambitions outlined by their dream projects.

Initially programmed concurrently at each institution between March to August 2020, the global Covid-19 pandemic and subsequent lockdown literally created a ‘suspended moment’ where each exhibition was postponed for an indefinite and painfully uncertain period. Upon reopening in August 2020 after an especially turbulent time, Carriageworks kicked off the trilogy of exhibitions with Giselle Stanborough’s Cinopticon. Ten months later CRONE by Sally Rees opened at Mona in June 2021, with Meatus by Frances Barrett opening at ACCA on 1 April 2022.

Works by each of these artists, commissioned through this Fellowship, along with a focused selection of Katthy’s works, have been curated as this touring group exhibition Suspended Moment – again through MGNSW. Starting at Wollongong Art Gallery and now at Manly Art Gallery as the only Sydney venue, the show travels to another six venues across Australia until January 2024. Goulburn Regional Art Gallery will close the tour, which is fitting as Katthy’s original Suspended Moment tour was initiated at Goulburn by then director Jennifer Lamb.

Each of the fellowship projects were so tailor made for their respective institution that the works on display have been significantly adapted and scaled down for tour. For Frances Barrett, a brand-new work was commissioned, A Song for Katthy, which enabled Frances to extend her interests in archives, listening practices and embodied performative action. Frances was given unfettered access to Katthy Cavaliere’s archives, which are housed at the Art Gallery of NSW. The outcome is this astounding performance video work, which I am so proud to have included in this exhibition. In some ways it is a testament to Katthy’s legacy and her enduring and generative influence on Australian performance artists today.

Giselle Stanborough has expanded her installation, Cinopticon, with a new performance, Never Again Alone. Created specifically for the tour, it responds to Katthy’s automatic writing practice, as articulated in her works on display, a moment alone (the tall chair writing performance) and automatic actions (the small chair typing performance). Sally Rees’ work has been significantly adapted and revised from its Mona presentation, and we have Dara Gill’s expertise and Lupa sponsorship for making that happen.

This important fellowship illustrates an ongoing commitment on the part of each partnering institution to realise ambitious and experimental projects by Australian artists and to supporting those artists’ visions. Each of these works are immensely brave, ground-breaking and career defining, and each are fitting of the legacy of Katthy Cavaliere, who was determined to push the limits in her own career in a way that was raw and deeply emotional. For audiences, this suite of commissions, assembled here for this touring exhibition, offers an insight into the practices of some of the most exciting artists working in Australia at this time.

It's remarkable this journey started in 1996 with Katthy Cavaliere's grad show and an answering machine message.

Lucky I called her back...

Previously unpublished speech notes for the opening of Suspended Moment at Wollongong Art Gallery on 13 March 2022 and Manly Art Gallery and Museum on 6 May 2022.