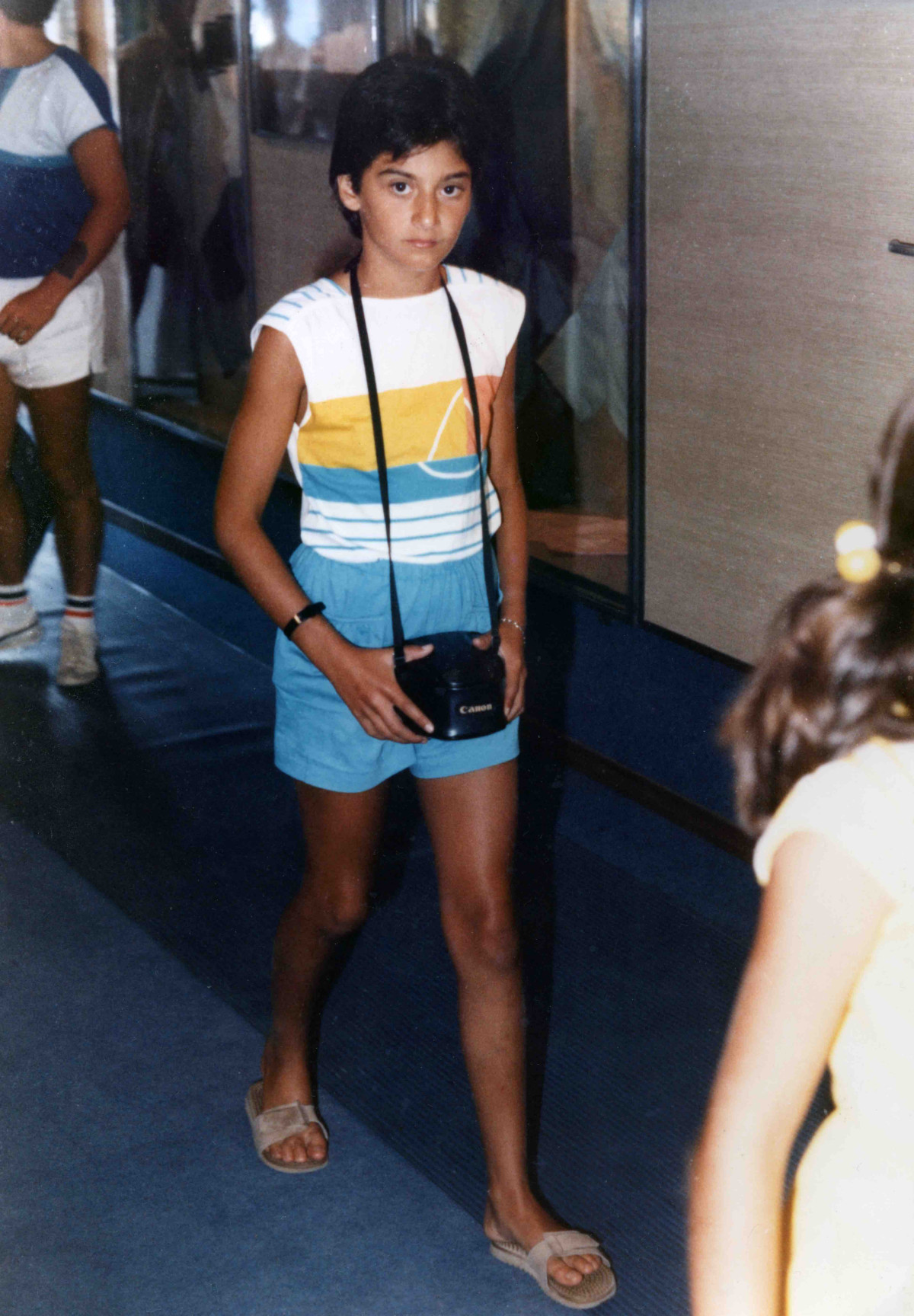 Cherine Fahd, Cherine coming inside the boat to the Greek islands 21/8/1985, 2008
Courtesy of the artist

Stage Unstage connects the surrealism of Fahd’s early photographs with more recent works that challenge documentary photography conventions through strange and subtle twists on scenes from the everyday. For the artist, life unfolds as a playground of forms composed of understated, potentially uncanny details. The ‘real’ and the ‘surreal’ is presented as a dichotomy that does not exist in tandem as much as it intersects and overlaps. As Fahd sets out on her peripatetic mission to document life as she sees it, as her feet feel it, public spaces coalesce with private reverie; indeed she looks for fleeting moments of intimacy amid sites run rife by urban alienation.

The settings are carefully choreographed in early work, though Linda Michael has noted how they appear like documentary photographs, ‘subject to the whims of nature and circumstance’. I Begged the Wind to Blow (2000) and Wishing for a Goodyear (2000) use balloons and fabrics as sculptural forms that animate elemental forces otherwise difficult to render visible. Fahd imbues her compositions with a lightness of touch, allowing just enough ambiguity to resist fixed meaning and upset distinctions between the staged and unstaged.

Cherine Fahd, The Chosen, Redman, 2003
Courtesy of the artist

Though comprising work spanning almost a decade of production for Cherine Fahd, the starting point for Stage Unstage is a photograph of the artist when she was 11-years-old. Drawing its title from text scrawled on the back of the photo by her mother, Cherine coming inside the boat to the Greek islands 21/8/1985 (1985/2008) depicts the artist as a young girl on holidays, a single lens reflex camera hanging from her neck. Cherine cradles the camera with both hands, poised to capture the passing attractions. Fixing her eyes on the gaze of the photographer whose camera documents her passage between countries, Cherine elicits the kind of determined seriousness one expects of a child poised for a great future. Unassuming in its vernacular familiarity, Cherine’s charming holiday snapshot encapsulates the spirit of adventure and wonder that characterises a practice largely made up of scenes captured while strolling through public places. It’s just as well young Cherine wears massage sandals: taking good snaps can be tiring work.

Cherine Fahd has not publicly exhibited a self-portrait before. That her ‘self-portrait’ was captured by someone else and later recontextualised as a visual signature for a survey exhibition is telling – perhaps she felt more comfortable representing herself through the gaze of another. There is a sense that we are granted insight into the subjectivity of the artist; that we literally ‘see with her eyes’ the childlike wonder implied by her work. It is as if Fahd has embedded her works with an ‘afterimage’ that dances in the imagination once you close your eyes. A niggling sensation lingers that her pictures are invented as we view them, as if materialising in the sleepy lull of meaning conjured when dream and reality blur.

Illusory and perceptual shifts in consciousness gain momentum in the computer generated Looking Glass (2004/05). Through the manipulation of focal points, Fahd stages unstaged scenes of people enjoying downtime in public gardens and amusement parks. The opportunity to reprint images from Looking Glass as billboards for Hazelhurst’s gardens gives them a new lease on life; indeed one might assume they were created with this setting in mind. The running boys captured in Looking Glass: Tiergarten 1 act as a compendium to A Woman Runs, furthering Fahd’s interest in how form gives way to movement within space.

The Chosen (2003/04) and Trafalgar Square (2005/06) are two bodies of work that capture the quiet magic of Fahd’s practice. Seemingly banal in their focus on repetition, they warrant a closer look. Though documentary codes are utitlised more explicitly here, a purist would contest her subjective stress on portraiture conventions. In The Chosen, the sandstone lining the Seine River envelops individuals caught cooling down during a Paris heatwave, their bodies suspended in poses of religious fervour. Grand British architecture frames the body in Trafalgar Square, elevating moments of private repose to the realm of museological scrutiny.

Private moments un/staged in public also play out in her most recent series The Sleepers (2007). A catalogue of images documenting people asleep in public parks, The Sleepers restricts voyeuristic potential through the careful manipulation of cropping and pictorial orientation. As if rigor mortis has set in, these narcoleptic bodies are like human sculptures auditioning for a horror movie – uncanny in their strange familiarity. It seems apt that Cherine Fahd should cap this exhibition with The Sleepers: strolling through life looking for the perfect picture deserves rest, however temporary.