Reviews, Profiles
Souped Up at Supré
on The Motel Sisters

The Motel Sisters, I hear she had a shotgun wedding and all her family wore black, 2005

Why do the most spectacularly alluring specimens of human trash always get everything? Great clothes, hair, accessories, TV shows, product lines, sex scandals, party invites, little dogs, and bit parts in horror films. Paris Hilton’s fame reigns like a headlining celebrity rash erupting over the airbrushed face of US trash culture – a trash rash so to speak. With heiress as a major fame claim, Paris and sister Nicky became über-whore-magnets, making bad seed hot beds out of other young dumb starlets like Nicole Ritchie, Lindsay Lohan, Bijou Phillips and Taryn Manning. Reinforcing the old conundrum that it takes a hell of a lot of cash to certify top grade trash, Paris Hilton is, as Terry Sawyer aptly puts it, "another rich cracker moron" - white trash with money, you might say.

What hasn't Paris tried her hand at? Unless one considers her foray into home video a downloadable kind of video art, we can safely assume Paris hasn't been to art school. Such an art educational oversight is exactly the kind of hole the Motel Sisters bridge. As if they one day realised that pink had met unfettered discrimination in an artworld so beige, Australian performance artists Liam Benson and Naomi Oliver invented the Motel Sisters: a super duo that crash art openings guerrilla style, dressed up to the sixty-nines. The Motel Sisters loved the starfucking, sycophantic flatter-blabber of art openings so much that they decided to become artists themselves. And when their celebrity got too big, they invented more than just a back story; they cultivated alter egos in Tiffany and Shane, and let Sari Kivinen's character Jessee-Liina trail along for the joyride. Never one to let a good story get in the way of truth, I spoke to Liam, Naomi and Sari while waiting in the Drive-Through queue at Penrith McDonalds. 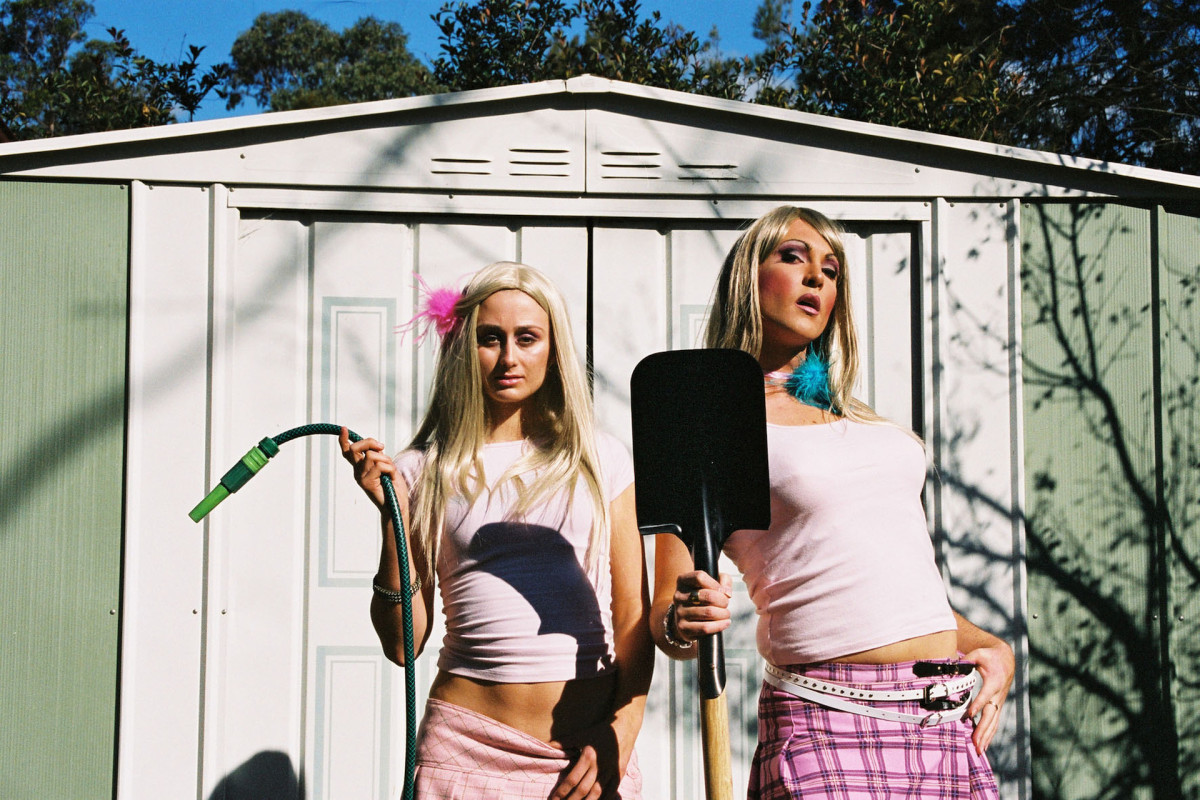 When did you start The Motel Sisters?

Naomi Oliver: The first performance coincided with the 2004 Biennale. We had tickets for the artist party and we just thought it would be hilarious to dress in pink. And we both had this thing for Paris Hilton because she seemed famous for no real reason.

Liam Benson: The reactions were quite explosive so we thought we'd develop it.

What was it about Paris Hilton that inspired you in the first place?

NO: Self-promotion and over-confidence.

LB: Because there doesn't seem to be enough of it in the art community. Everyone's so sensitive and hard on themselves. We always felt Paris’ confidence was a really honest form of self-love.

NO: Paris became famous by just turning up for things, so we thought let's just turn up for things and see how far we can surpass people's expectations; getting people used to an idea and manipulating their perceptions of us and what we are lovingly parodying. We're a bit like what a ‘Westie’ teenager would find exciting to dress up as.

Why is ‘Westie’ culture important for the performance? The suburban aesthetic seems at odds with the celebrity cultures referenced.

NO: For me, working in Penrith for years, you see the Supré culture which is a cheap kind of glamour which I identify as being very Paris Hilton. If she wasn't an heiress, she'd be a Supré queen.

LB: Not because that would be the only job she could get but because she'd love it.

So Supré is the inspiration for all the costumes?

NO: Yeah, we buy all the costumes from Supré and we make any one-off pieces with materials from Spotlight. Paris Hilton looks like she shops at Supré but she makes it look really glamorous.

The suburban white trash feel of the Motel Sisters really seems at odds with the wealth, privilege and power of their real life counterparts. Are you saying money corrupts taste?

NO: I don't think we are. Paris Hilton wouldn't dress all classy because then she wouldn't be noticed. She's creating a hook, and the overtly sexual, trashy style is her hook.

LB: We're not saying this is good taste or bad taste, we are just celebrating a particular type of taste: the ‘souped up’, outlandish and garish.

Do the Motel Sisters sometimes crash and burn – that recurring trademark of real life celebrities enthusiastically documented by the tabloids?

NO: We sometimes pretend to come down off drugs because it's cooler to pretend.

LB: The Motel Sisters are very provocative but don't have sex. The irony is we get dressed up and our look screams sex, but there would just be no way logistically that we could have sex! We're watching our wigs all night to make sure they don't get caught alight or tangled in something. Basically my breasts are a launching pad for messages.

Tell me a bit about your video work Pink Thang (2005) and its connection to Tracey Moffatt's Pet Thang (1991)?

LB: We love Tracey Moffatt! But Pet Thang was our least favourite work so we wanted to parody it.

NO: Pet Thang had a sexual element that we were confused by. Maybe it looked a bit stiff, awkward and self-conscious like what I've seen of Paris Hilton's sex video. As emerging artists it is really naughty to take-off someone who is completely established and an artworld darling.

How do you understand the role of drag in relation to the Motel Sisters?

LB: We consider it ‘advanced dress ups’. As a drag queen, I'm like the child's toy that you can muck around with and get a bit broken, whereas traditional stage drag queens are like mantelpiece ornaments that you can't touch.

NO: And you do get touched quite a bit.

The Motel Sisters, Jessee Liina, Paris and Tacky Motel at the Being-Narly, 2006

Sari, how do the characters you have developed relate to the Motel Sisters?

Sari Kivinen: I developed my first character about a month after the debut of the Motel Sisters in 2004. I was going to be some kind of Jessica Simpson if they were Paris Hilton. But I went nuts and created three characters – three different versions of the same person. The first one is Jessee-Liina – she's the one who goes out and socialises with the Motel Sisters. Jessee-Liina's two younger sisters – Caroliina and Starella – haven't interacted with the Motel Sisters. I'm exploring their sibling dynamic, their hereditary weakness to alcohol and the downward spiral between them. Jessee-Liina aims for the top, so she's a socialite always smiling like a pop star.

Tell me about Shane and Tiffany, who are alter-egos created for the Motel Sisters.

NO: Shane and Tiffany are average Westies. Liam is Shane and I am Tiffany.

LB: Shane's a repressed working class male who doesn't really know where he's going in life, but he works as hard as he can.

NO: The relationship between both character couples is based on escapism or is like a dream – much like Shane and Tiffany dream up Paris and Tacky.

LB: When Shane becomes Tacky, he's like a girl from magazines like FHM, Ralph and Picture – all airbrushed and worked over.

So you invented the "dream" first and then the people who dreamt them?

NO: Yeah we work backwards.

LB: Actually, we're kind of like sketch comedy where you have many different skits that sometimes overlap.

Do Paris and Tacky know Naomi and Liam?

LB: No, they're too self-obsessed and caught in the moment. They don't really know where they are half the time.

Will you move beyond showing at galleries and crashing art openings?

NO: We have so many ambitions. We want to slowly infiltrate B-grade TV show audiences. We absolutely love Toni Pearen and tried to get into the audience of Funniest Home Videos but that didn't go down well.

LB: One day we'll have a TV show of our own. And we want to release a book called Contemporary Art for Hotties.

NO: Next year we want to do a show called Because I'm Worth It and invite artists to make work manipulating our image. It'll be like the Archibald but better because it's about us. We'll present M.E. Awards – named after the Emmy Award, which we'll give out to the best artists on the night.

Do the Motel Sisters have a shelf life?

NO: We'll last as long as Paris Hilton is alive and well. If the interest in her peters out then maybe we'll retire.

LB: We just know we're going to meet Paris Hilton before then.