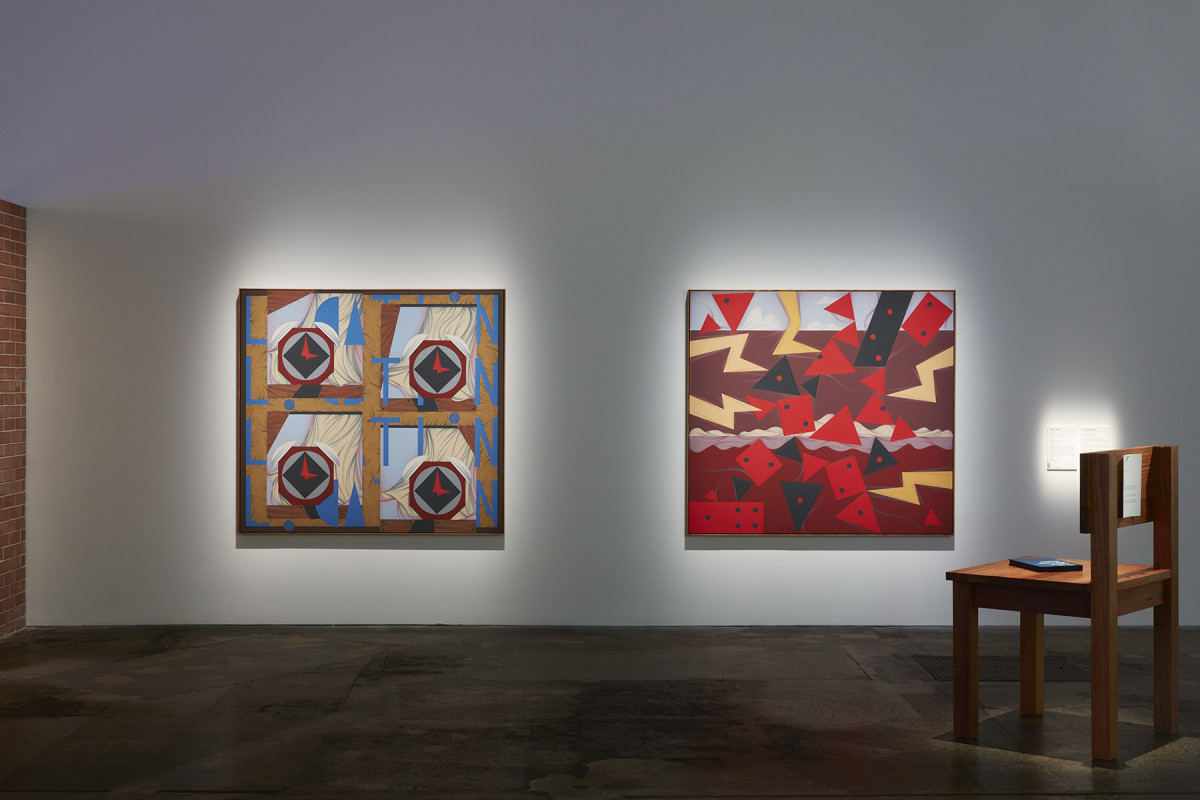 Long associated with melancholia in literature and art history, autumn is the season when temperatures decrease, daylight shortens, and nature’s palette shifts as tree leaves change colour and plants stop making food. Animals prepare for the winter months ahead while humans often respond to the pallor of the season in a depressive and withdrawn way. The last poem by Romantic English poet John Keats, To Autumn (1819) – written only months before his death of tuberculosis at the age of 25 – describes all the trademarks of autumn. Interpreted as an allegory of artistic creation while bearing down as a meditation on death and decay, in three stanzas Keats frames autumn through its fruitfulness, labour and eventual decline.

In his three paintings for The National 2021, Mitch Cairns conveys more or less the same thing with his visual puzzle picture poems. Edging more towards apocalyptic themes than falling leaves, Cairns conceived and commenced work on this new body of work last autumn, a period where the season’s tropes of death and decay threatened more ominously as we plunged into the lockdown of March 2020. As March 2021 rolls around and The National is delivered against the backdrop of this year’s iteration of the melancholic season, his paintings elegantly speak to time while abjuring the cliches that were quick to circulate in art made in the time of COVID-19. To even reference the pandemic feels like it will timestamp the work within a framework to which it relates but resists.

Through a limited set of motifs – trees, dice, lightning, windows and alarm clocks – Cairns sets up a narrative where the declarative gesture of graphic intent offers meaning as it is diffused. His images arrive fully formed in the mind, but their coming into being is performed in the studio with resistance. A brick wall measuring the same height of his studio is erected at a right angle in the gallery, a domestic incursion into the white cube conventions on which galleries are predicated. Connotation simultaneously blooms and withers as Cairns pursues an open-ended approach favouring conceptual fragmentation over illustrative registration. His work can’t be consumed in a single hit; they are riddles that don’t need to be solved. And yet despite his tender obfuscations, elements of the work come clean after the eyes have been exercised by their graphic hit.

Text appears often in his practice. Cairns approaches words like a cartoonist concocting a caption, and yet the word is expressive – a typographic mark on paper or canvas – redolent of meaning but also reduced to the absurd. Adjacent to his paintings sits an oversized chair as a farcical framing device for Selected Scuffs (2021) – a series of writings on A4 paper. Only one of the three paintings uses text. In it the word ‘location’ is repeated four times alongside a quartet of windows with identical curtains billowing in the afternoon light, each square portal to the outside world framing a clock that chimes the time: 3.00pm eternal.

While seasonally precise, the reference to a specific time of day is as compositionally driven as it is diaristically correct. The right-angled hands of 3 o’clock seemed like the right way to go, while it concurrently honours the time Cairns has left the studio each day for the past three years to pick up Roland, his son. Daily rituals like this remain constant, levelling out the anxieties of everyday life as they herald the relentless passage of time. The two co-dependent tree trunks in Self-Portrait as an Autumnal Low (2021) are steadfast and supportive despite the melancholy they hold; a ballast giving weight and support to the daily rhythms of ordinary life in extraordinary times.

Published by Carriageworks in 2021.