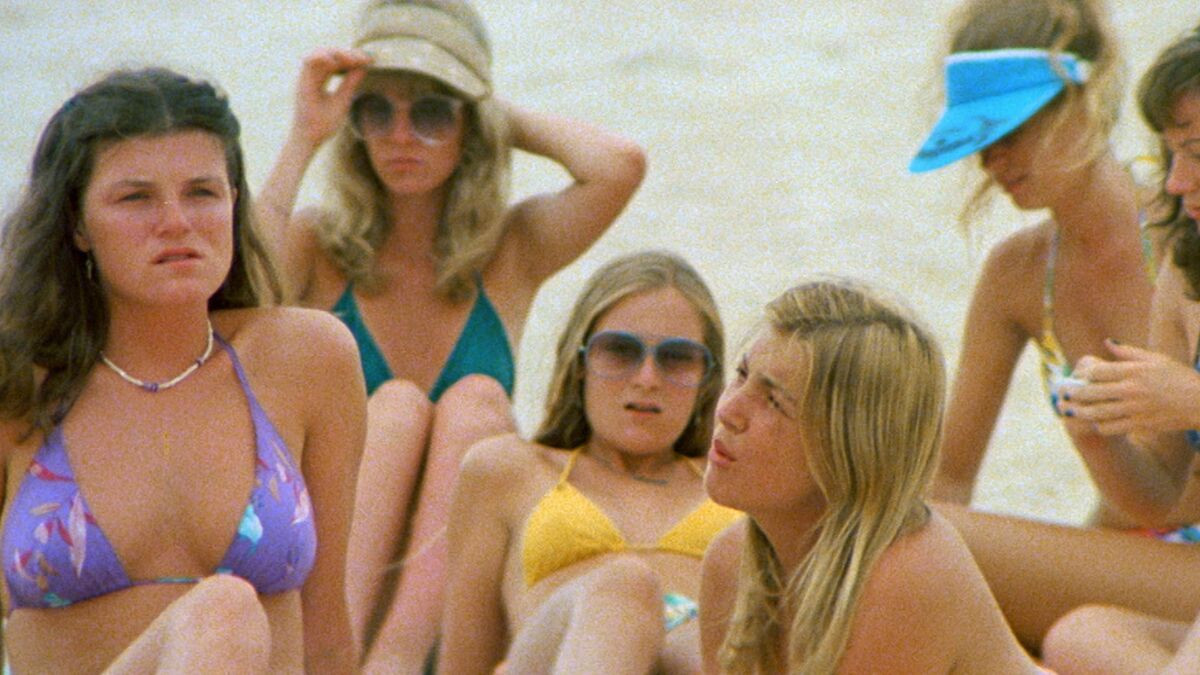 Puberty Blues opens with best friends Debbie (Nell Schofield) and Sue (Jad Capelja) walking from “Dickheadland”, their home turf on the South side of Cronulla Beach, to the utopian surfing destination of Greenhills. As Debbie says in voiceover, popularity and status, at school and on the beach is determined by whether you are a surfer or a nerd. With this in mind, Debbie and Sue set out to transcend their nerd status by deliberately “brown-nosing” their way into the elite Greenhills gang of top surfers and their bitchy girlfriends.

Prior to Puberty Blues, Bruce Beresford was better known for his “ocker” Barry McKenzie films and David Williamson adaptations. Shifting focus away from the intensely masculine perspective of many of his earlier films, Puberty Blues depicts pressures to conform within a sexist surfie subculture as seen through the eyes of a teenage girl. Nevertheless, Beresford’s ocker sensibility is evident in Puberty Blues because it examines a group of male ockers in training and the girls that attend to them.

Being accepted or not into this exclusive scene is policed by the girls and they certainly don’t look kindly on “crawlers” like Debbie and Sue. But after an act of schoolyard honour, Debbie and Sue are accepted by the gang girls and invited to the “out of bounds” area where smoking (without inhaling) in the lavatories is all part of the ritual of being cool and accepted. When the entire group meet at a paddock, Debbie is expected to pash surfie hero Bruce (Jay Hackett) because he wants to “go round” with her. “He won’t bite”, says one of the girls, which is ironic considering the girls’ tally of hickies informally ranks their desirability, and they later watch the Australian vampire film Thirst (Rod Hardy, 1979) at the drive-in. It is here that Bruce unsuccessfully tries to deflower Debbie in the back of his panel van. Puberty Blues would not be complete without the panel van, the macho icon of Australian surfer culture. It is decorated with girlie pin-ups and deep purple curtains that suggest a fleshy interior. While the car symbolises male virility it also evokes female genitalia – not unlike the vaginal car imagery in Margaret Dodd’s Australian feminist short This Woman is Not a Car (1982).

A clearly defined and accepted role as willing slave is what the surfie chicks endure to maintain longevity in the gang. For the girls, expressing an interest in surfing is off limits, as is eating in public or going to the toilet. When Bruce drops Debbie, she hears about it through Cheryl which shows, as Jim Schembri's review for Cinema Papers (1982) points out, “the effect the group has in stunting any notion of responsibility among the boys”. Wearing a “franger” during sex is the limit of a guy’s responsibility and when Debbie experiences a pregnancy scare, she goes it alone. (The film was made before AIDS hysteria erupted; condoms are worn to avoid getting a girl pregnant, not to protect against sexually transmitted diseases.) Debbie’s mum (Kirrily Nolan) chooses irrational drug-related fears as a convenient distraction from the real issue of dealing with a sexually active teenager. When Debbie is instructed to avoid the aisle seat at the movies it’s “because some pusher might jab you in the arm with heaven-knows-what”.

Puberty Blues struck a chord with teenage audiences when it was released because its depictions of the surfing subculture, and of ritual experimentations with sex and drugs, were refreshingly frank. Two years earlier Albie Thoms’ Palm Beach (1979) presented a much darker look at the criminal underbelly within a transient surfing community. The juvenile authenticity of Puberty Blues was attributed to the fact that Kathy Lette and Gabrielle Carey, who wrote the novel on which it was based, were teenagers with firsthand experience of the scene. Beresford was drawn to directing the film because it was told from a girl’s point-of-view, and provided a perspective of growing up in Cronulla, a part of Sydney far removed from Beresford’s stomping ground of Parramatta.

What makes Puberty Blues so memorable and popular is the way it tapped into the trash-talking vernacular of the surfing subculture, especially as filtered through high school students. US teen flicks from the 1980s like Fast Times at Ridgemont High (Amy Heckerling, 1982), Valley Girl (Martha Coolidge, 1983) and Heathers (Michael Lehmann, 1989), have had a lasting popularity and cult status primarily because of the nostalgia generated by the use of slang. In this respect Puberty Blues is no different. It is drenched in Australian slang from the early 1980s, and shows how teenagers appropriated it as a sign of coolness.

Australian audiences unfamiliar with its subcultural slang are still able to “identify” with the film due to the presence of fairly typical teenage themes like peer and parental pressures, sexual awakening, drug and alcohol use, and so on. In Australian National Cinema (1996), Tom O’Regan argues that a film like Puberty Blues “others” the Australian by asking its “audience to play anthropologist to their culture”. The anthropological “work” involved in viewing the film only exists for viewers significantly distanced from the experiences represented. Viewers unsurprisingly distanced were international audiences because they didn’t “get” the film – its Australianisms were far too specific even for the anthropologically minded.

Puberty Blues was aimed at white suburban Australian teenagers upon release (it hit cinemas in the summer holidays of 1981–82). Those very teenagers have grown-up and now commonly look on the film with affection because of the way it never patronised its subjects. If anything, young audiences identify with the film because it never presents blatant messages about how teenagers should behave. Older audiences, or even parents, might look upon its subcultural milieu in anthropological terms, if they can get past the initial anxiety to lock up their kids.

Essay for CTEQ Annotations on Film series by Senses of Cinema

Published by Senses of Cinema in 2004.