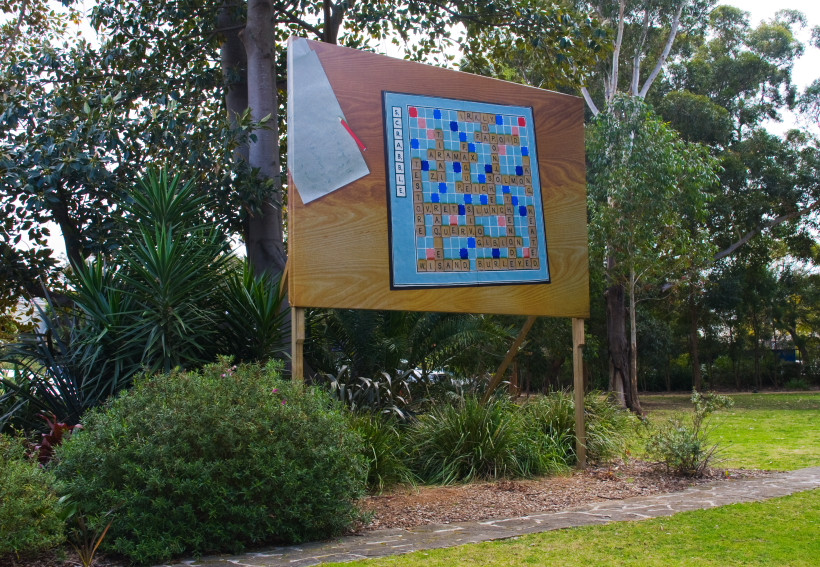 Emma White, Plausible Lies (this is how rumours get started), 2008
Photo: Silversalt

Playing Scrabble is the kind of thing you would do when staying in a rented holiday house. There’s always a dusty box of the game located somewhere near the tattered row of Sidney Sheldon and Anne Rice novels. Because Scrabble is played on holidays, inevitably a glass or ten of red wine is involved, which usually makes for heated debates about the legitimacy of certain words. You know the score: if it is not in the Dictionary, it’s not on. As the dictionaries found in your average holiday house are editions from the mid 1970s, there’s bound to be further debate about the “contemporaneity” of more recently invented words.

When I asked Emma White if she would participate in Under Stars and make a billboard image while in residence at the Hazelhurst cottage, it was because I have been interested in how she makes work that plays games with language and representational systems. It came as no surprise to me that White would use the time in the cottage to fashion a Scrabble board from synthetic polymer clay and proceed to “play herself” at the game. Titled Plausible Lies (this is how rumours get started), the invented vocabulary of words appearing on White’s Scrabble board is not random as much as they follow on from what we know intuitively of the structure and etymology of language. We can invent new words, but it’s harder to reinvent the rules of language as we are bound within a system that limits and prescribes the possibilities available when combining vowels, consonants and syllables. If anything it’s easier to reinvent meaning. The word “scrabble” is a case in point – originally it meant “to grope or scratch frantically”.

The clever verisimilitude achieved in White’s work, where the replica so closely resembles the actual thing, is metaphoric of the trickery embedded within representation itself. We know this Scrabble board is not real: it is a replica that becomes even further severed from reality once it is photographed and blown up at billboard scale. This representational doubling replaces the real-world referent (an actual Scrabble board) with an image (a representation of a representation of a Scrabble board), where meaning becomes blurred and logic fuzzy. Indeed this is how rumours get started: when we play (racistly named?) “Chinese Whispers” with linguistic sign systems, the rules break down, cumulative error takes hold and the rules of the game exposed. We fall beyond words.

“Everything I know comes from secondary sources,” writes White in an artist statement. The strange and jostling melee of words is the outcome of knowledge filtered through the prism of indirect thought, secondhand news. Truth is never as interesting as the anagrams it can produce. The titular character of Rosemary’s Baby (Roman Polanski, 1968) creates anagrams with Scrabble tiles in an attempt to understand a spooky predicament. An answer is revealed, but it doesn’t make the truth of the situation any less terrifying. Perhaps the key to unlocking White’s Scrabble board operates on a similarly numinous thread, where the systems of meaning collapse to the point where divination is the only possible way out.