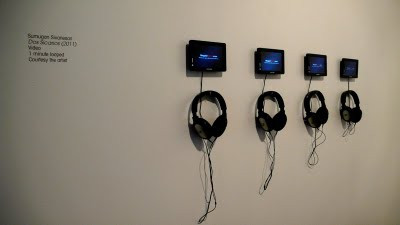 BlogdelNarco.com is a blog that insalubriously reports on drug-related violence in Mexico. Anonymous bloggers established the site in 2010 after several journalists had been murdered for reporting on narco activities, thereby attracting global notoriety by sensationalising an inordinate number of gruesome drug war crimes gripping the country. Torture and public executions are commonplace in this context with such blogs capitalising on our longstanding fascination with the spectacle of publicly staged violence – both real and represented. Mexico has a long established culture of death, albeit one that has been romaticised within art history and popular culture. To an outsider looking in, the proliferation of blogs and social networking sites reporting on the drug trade would seem an extreme and deeply disturbing consequence of narcocultura. Aside from its online manifestations it is also evidenced ‘in the mausoleums and the music and the baseball caps embroidered with marijuana leaves in Swarovski crystals,’ as historian Froylán Enciso points out. Such expressions of death he claims, merely refer to ‘the array of symbols they surround themselves with in order to ward off that fear.’

Describing himself as an ‘anti-disciplinary artist’, Sumugan Sivanesan’s work interrogates Achille Mbembe’s theory of ‘necropolitics’ and its various developments. Sivanesan spent more than three months undertaking a residency at SOMA in Mexico, his ensuring research into narcocultura informing the four-channel video installation Dos Sicarios (2011). Having mined the BlogdelNarco.com site for content, Sivanesan selected a one-minute grab of surveillance footage showing a man being shot dead in a public lobby, presumably a drug trade casualty. Typical of surveillance imagery, the camera is static and banal, detached from the horror it depicts.

Narcocultura has become so normalised that it has inevitably become a facile part of everyday life in Mexico. Narco imagery is consumed as comedy – terror emptied out and replaced with absurdist shlock, an advertisement for the pervasive drug-related economy of death it depicts. The BlogdelNarco.com branding on the clip, along with the retail-like display Sivanesan creates with his arrangement of screens and headphones in the gallery, reads like a droll commercial for murder. More a comedy of errors than a clean kill, the victim is murdered after the gun jams and is thrown across the floor to an accomplice who together bumble but succeed in the execution. It’s the kind of bamboozled violence familiar in Hollywood and exploitation movies alike.

Sivanesan recontextualises the found footage as art by presenting four different ‘takes’ of the same footage to augment its comic value through sound or the lack thereof. The first screen uses video effects to sonify the visual signal; cartoonish sound effects imbue the action with broad slapstick punch in the second; the disembodied voiceover of a film director is ironically heard obsessing about the violations of OH&S in the third take; the fourth ‘applies’ silence yet headphones are plugged into each of the monitors (it only lasts for one minute, but recalls the same kind of silence John Cage constructs in his avant-garde masterpiece 4'33"). The serial killing on screen becomes a serial artwork; each screen synced and repeated in image but not in meaning.

More than simply pointing out the malleability of the image, Sivanesan responds to a culture of user-generated media that negates encoded dominant meanings through oppositional tactics. Such is the democratic power of a more mainstream site like YouTube for instance, where users can upload ‘video responses’ that often remix and mash content already on the site in ways that construct entirely new understandings. Narco blogs, however, are in and of themselves oppositional, using dark humour to amplify shock value. Sivanesan notes [in a 2011 artist statement]: ‘a generation of narco youth raised on social media court celebrity by posting dispatches, threats and trophy videos that drive an emerging trend of watching real deaths online — a nefarious spin on prosumer net culture."

The aesthetics of surveillance already have a grubby lackluster quality, especially when remediated at low resolution on ‘prosumer’ blogs and gore galleries that are typically viewed on hand held devices and presumably shared virally through any number of social networking sites. Yet we are trained to believe surveillance is a truthful and unmediated trace of the real: the panoptic gaze of the camera regulates our behavior socially, capturing evidence, catching out a crime. By tinkering with the clip through value-added effects and soundtracks, Sivanesan exposes as connotation the supposed indexicality and truth-value of surveillance. No longer are we certain whether the scene is real or staged. Authenticity reveals itself as a construct.

Sivanesan plays with what viewers are willing to believe. When exhibited in an Australian gallery far removed from its Mexican narco context, the work inevitably becomes a critical exercise inviting potentially messy and irresolvable debates about mediation, affect, ethics, and politics. This doesn’t mean that the experience of watching is entirely devoid of visceral impact for an untrained viewer, especially if a viewer is to discount the artist’s use of sound (arguably it only becomes mordantly humorous when you pick up the headphones for two of the four screens). Sivanesan succeeds in trading off horror for banality in keeping with the way narcocultura is produced and consumed in Mexico and disseminated globally online. Sivanesan punctures perceptions of narco economies as airtight and culturally specific, exposing how drug worlds intersect with art worlds, all kinds of worlds. As drug money circulates volubly artists toying with narco and/or necropolitics unmask their complicity. And ours.