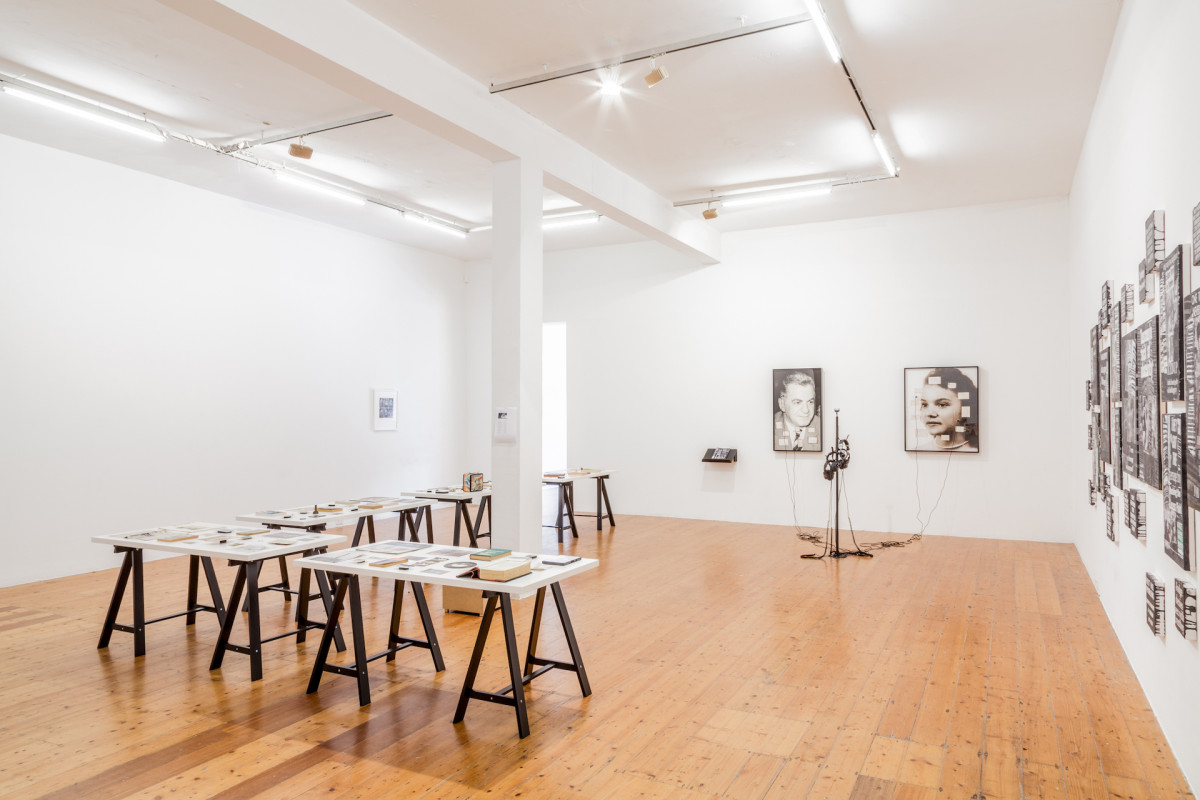 Nostalgia isn't what it used to be
I can only picture the disappearing world
When you touch me
— Sam Phillips, 2001

In The Museum of Falling, Patrick Pound unpacks a large selection of found objects and photographs that come under the taxonomy of ‘falling,’ forming part of his ongoing exploration of the human impulse to categorise, order and curate. One of its curiosities is a found vernacular photograph of a woman falling from a bike and reaching out towards a viewer standing in for a photographer unknown. Frozen mid-accident, her facial expression is a half-smile and her outstretched arm forms a wave. That it is printed on matte photo paper in saturated colour with rounded corners is a clue—along with her retro attire—of a timestamp indicating that it is a ‘happy’ snap from the 1970s.

Fast-forward some four decades and countless photographs just like this one are snapped on digital handheld devices every minute, proclaiming the minutia of our lives to anyone who will follow on social media apps like Instagram. Dipped in retro filters bearing names like Earlybird and Low-Fi, such pictures reveal, as Helen Grace writes, ‘how it is no longer simply light that is filtered but time itself.’

The perpetuation of retro filters that enable the present to masquerade as the past, shows how much of our understanding of digital media is a ‘remediation’ of analogue forms. In their book Remediation, Jay David Bolter and Richard Grusin argue that the ideologies of ‘newness’ that underpin new media are based on modernist rhetoric that insists new technologies cannot make significant contributions to culture unless they dispense with the past. Digital media never really break with the formal considerations that structure past technologies; instead they become subject to a process of remediation.

Defined as ‘the formal logic by which new media refashion prior media forms,’ remediation relies on the contrasting strategies of transparent immediacy (where representations efface the ‘presence’ of the medium) and hypermediacy (where representations foreground the ‘presence’ of the medium). According to Bolter and Grusin, the ‘double logic of remediation’ is set into action by these dual strategies, whereby ‘[o]ur culture wants both to multiply its media and to erase all traces of mediation: ideally, it wants to erase its media in the very act of multiplying them.’ 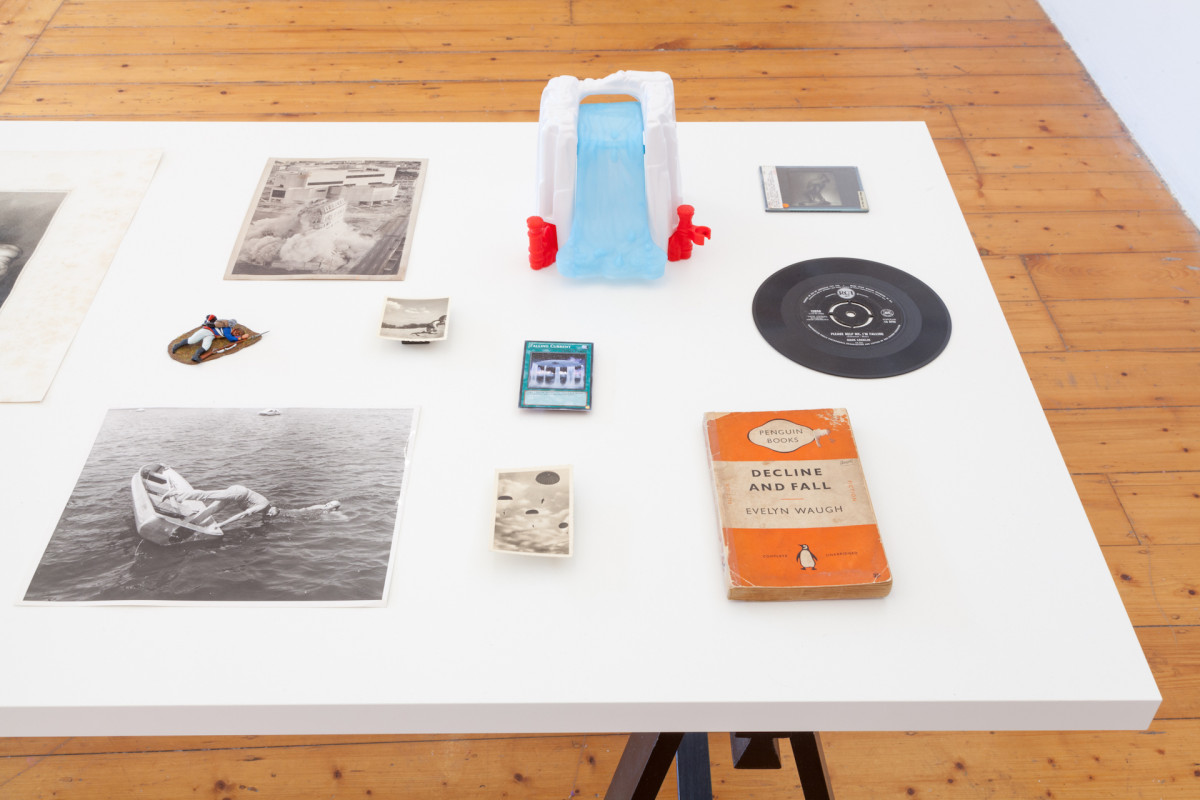 In a sense, remediation is a process of ‘falling’ back on something from the past. The action of falling: moving from a higher to lower level implies depth rather than linearity, suggesting that time is understood by drilling down rather than looking back. Certainly what is found when digging up or drilling down is the stuff of dead media: relics of planned obsolescence now constituting layers of the earth’s crust. What Jussi Parikka describes as: ‘A planet unearthed by human technologies and then covered with the ruins of those inventions. The earth feeds that process and disappears under it.’

The relentless persistence of the analogue past in present digital forms is a prevailing condition of contemporary visual media culture. To fetishise the past through collecting or curating relics of the past, or making new things in the past’s image, is suggestive of ‘muscle memory’: motor tasks forever imprinted mnemonically through repetition. Once some things are learned, they can’t be unlearned. ‘Like riding a bike,’ to use a truism ripped from Albert Einstein’s aphorism ‘Life is like riding a bicycle, to keep your balance you must keep moving.’

Frozen in time, the anonymous woman in Pound’s image is mid-fall, implying and defying gravity. Trapped like an insect in amber. Found by an avid artist-collector like Pound, her image ruptures with new meaning now indexed in a ‘museum’ of secondhand things possessed with like-minded ideas. 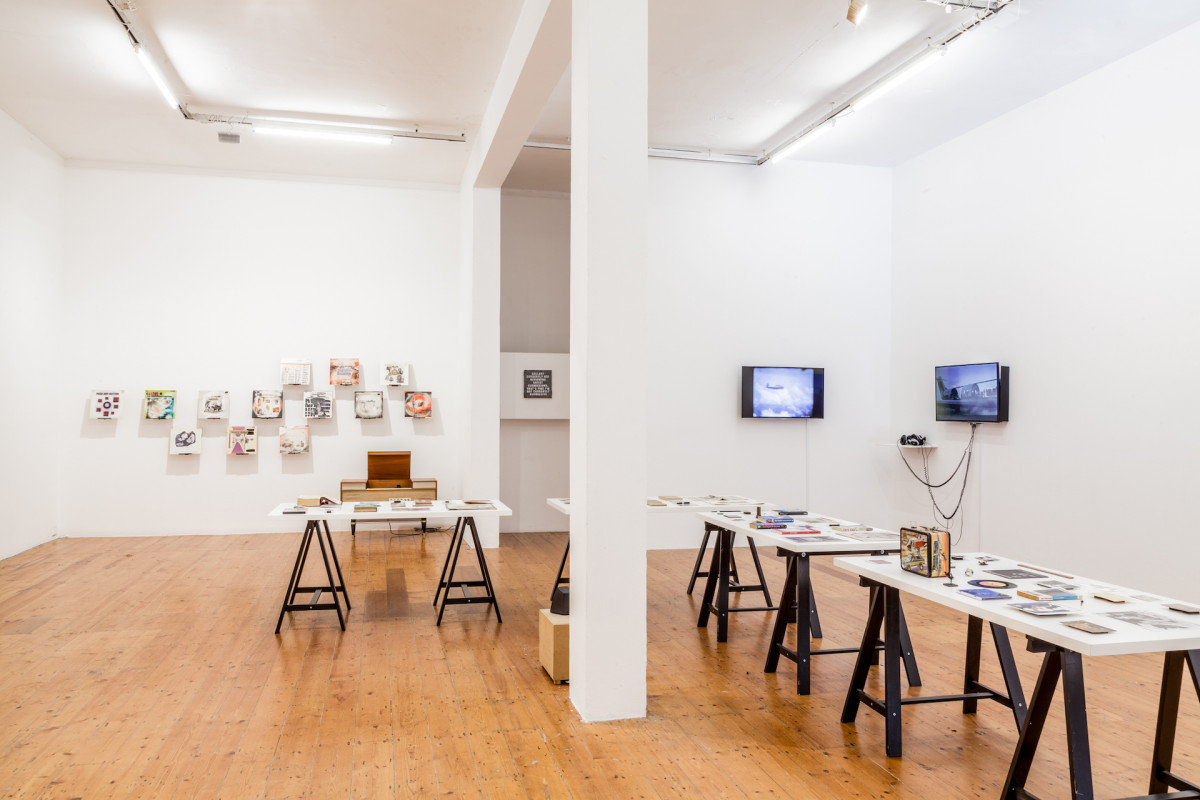 Lost and Profound considers the interface between obsolescent and new media technologies, exploring themes pertaining to memory, inscription and nostalgia. Most of the artists work with found objects or old media formats—lost fragments of the material world—and subject them to profound renewal and reformatting through video, collage, painting, photography, sound and music. Artists who respond to the material culture around them through collecting and repurposing material illuminate how those objects are devices for memories with uncertain origins, or, signposts for future forms of nostalgia.

The disappearing world where images go to die is the terrain that Lost and Profound navigates. The work in Lost and Profound suggests that memory is a fiction kept warm by the blanket of amnesia that settles as time closes in and obsolescence triumphs. Broadly speaking, the works in Lost and Profound attempt to remember something of the past so that they might re-new the present. 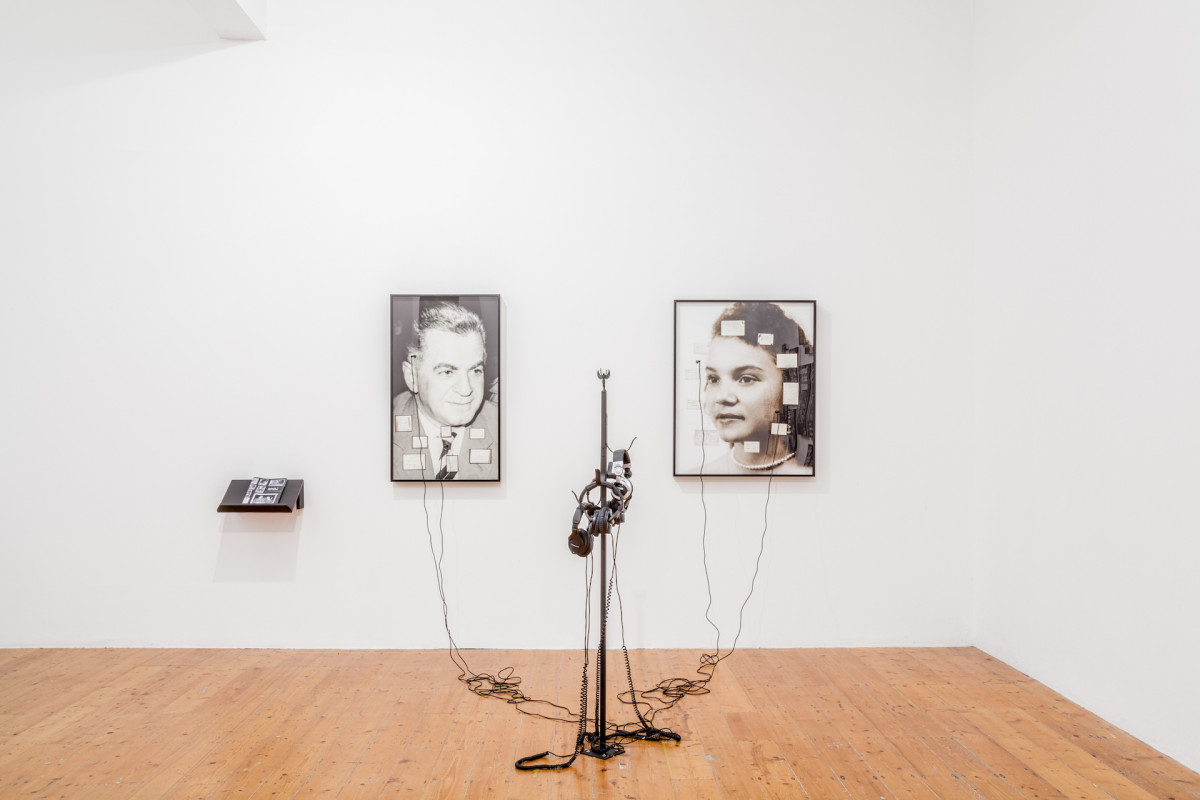 In Lost and Profound, Elvis Richardson scrutinises the visual clues from an anonymous 1950s photo album that she found at a Sydney flea market 25 years ago. In studying this collection of black and white photos and their handwritten inscriptions, the artist forms a portrait of Tony, the photogenic figure who presumably owned the album. Some photos suggest Tony is a migrant who arrived in Sydney by boat and who enjoyed the attentions of numerous women (he photographed them all). Contrasting these images of sexual conquest are pictures of Betty, his daughter who lived in Panama. On the back of each photo are brief notes to her absent father. Richardson boils the narrative down to two blown-up portraits, one of each figure collaged with handwritten notes. In an unexpected twist, a sound component by James Hayes is embedded into the images and heard through headphones jacked into the frames. Titled Episode 1: Dear Daddy, the melodrama of Tony’s compatmentalised, ‘episodic’ life is amplified through a revisionist history intersecting fragments of truth with the manipulations of affect typical of theme music scored for television or film.

Music is a strong thread connecting much of the work in Lost and Profound. Its most performative expression manifests in the work of Tina Havelock Stevens. Often performing under the moniker, White Drummer, Havelock Stevens stages site specific, endurance based percussive actions using rock n roll drum kits. A White Drummer performance is not framed by its location, but inhabits it visually and sonically tuning into the frequencies of site and place, the inexplicable and the other. In Up There, Havelock Stevens reflects on personal family mythologies of flight, particularly as they orbit around memories of her father, a pilot in the Malayan Auxiliary Airforce in the 1950s. From the dizzying perspective of the cockpit of his Harvard fighter plane, her father shot footage with a Bell and Howell Standard-8 cine film camera. An edit of this personal archive is paired with a digital video documenting a durational drumming action by White Drummer staged some 60 years later in the carcass of a retired plane in the aircraft ‘boneyard’ of the Mojave Desert in California. ‘I’m up there on flat earth where it always ends’, remarks the artist in reference to an inversion that suspends personal mythologies as ‘up there’ while grounding present realities. 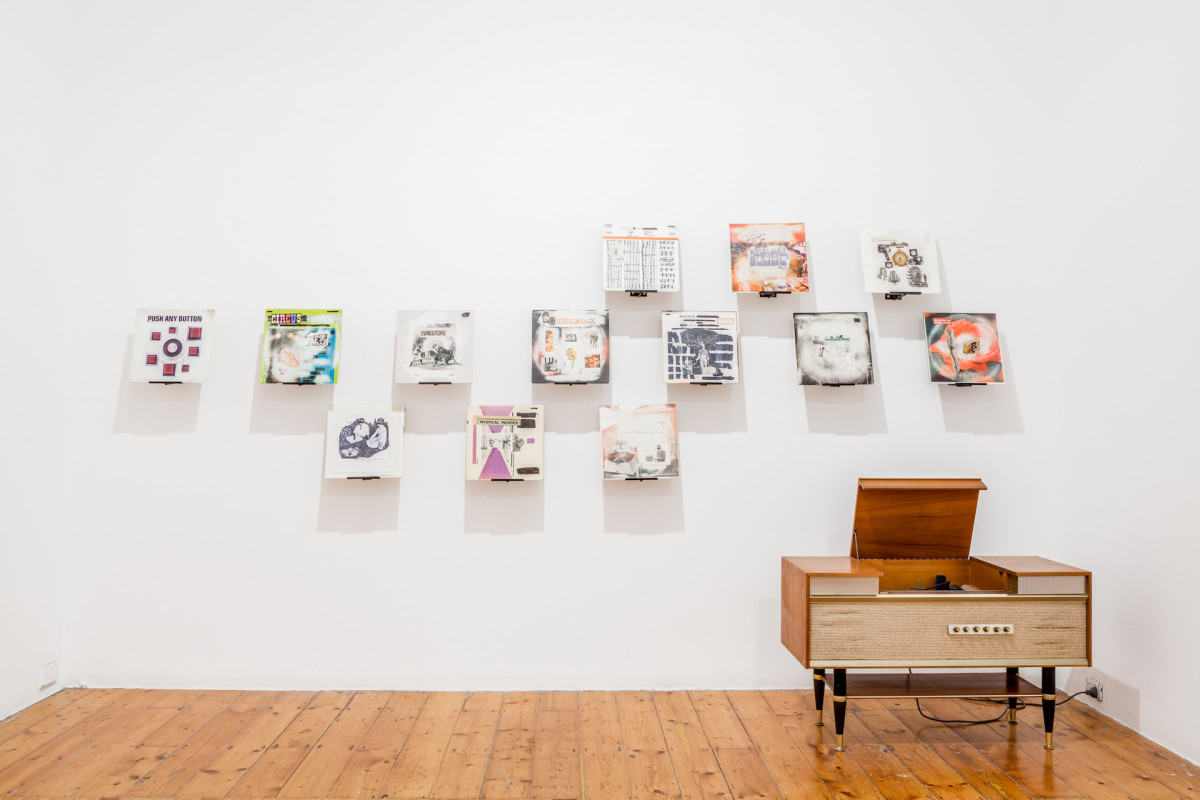 Music as a memory device is also a trope in the work of Los Angeles-based singer-songwriter Sam Phillips. Lost and Profound features a selection of found long play album sleeves that respond to the return of vinyl seen in recent years. Made for the release of her record Push Any Button (2013), Phillips adapts orphaned album covers sourced from flea markets by redacting the surface with vintage magazine collage and ink. Phillips has described Push Any Button in as ‘an impressionistic version of the AM pop radio playing inside her head’—a way of ‘looking at the future through the past’. The handmade gesture forges a personal connection between an artist and her audience. Yet the irony lingering behind this ‘retrofuturistic’ packaging obfuscates the reality of a digital economy bolstered by the artist’s online presence through social or streaming media rather than the record store of the past. 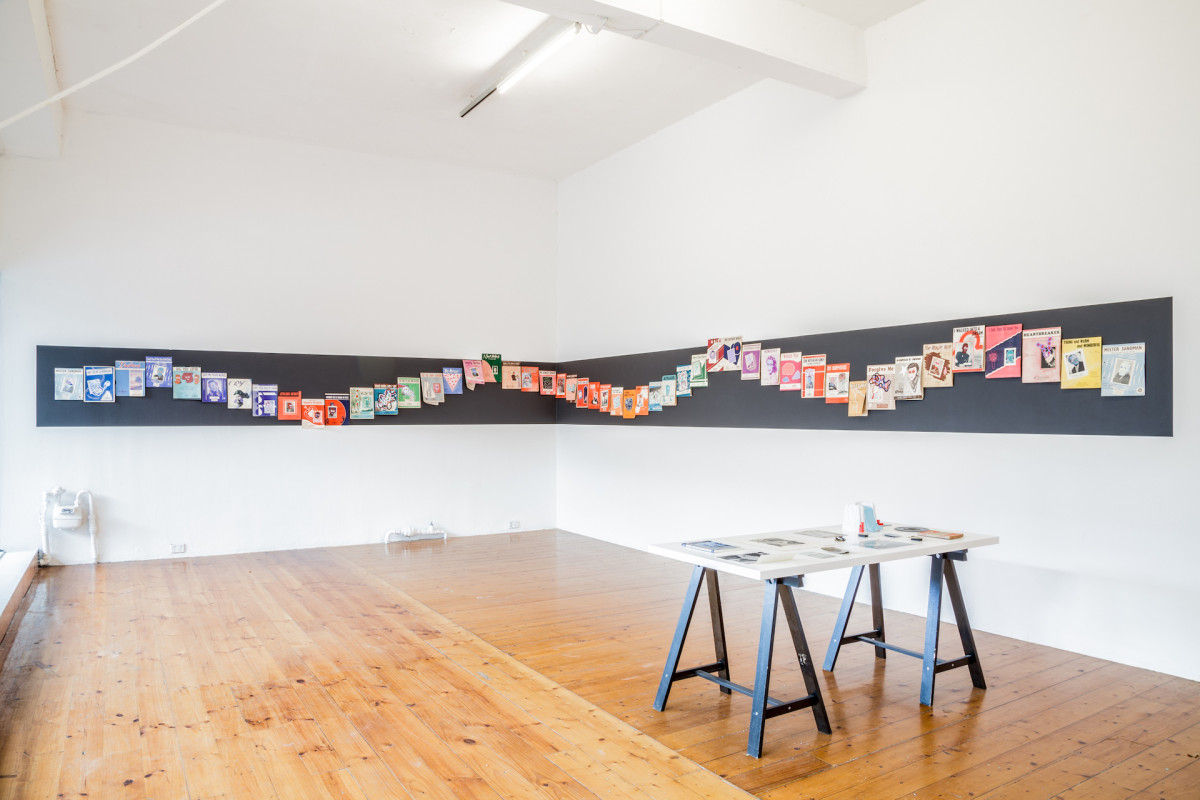 A fascination with bygone music and its associated graphics also informs Mister Sandman (2015) by Tara Marynowsky. Trawling archival websites and eBay for found nostalgic images, Marynowsky scavenges the visual culture of bygone times. Through the gentle application of gouache and watercolour, Marynowsky imbues found text and imagery associated with vintage song sheets with an otherworldly emotional presence: “bringing them back to life” as she puts it. Her creative interventions intersect the handmade with mechanical reproduction, elevating these mass-produced artefacts, while simultaneously drawing attention to the ever-changing historical representations of identity, particularly in relation to women and beauty. The placement of each song sheet in a sprawling, lyrical arrangement references a musical stave while also suggesting that each song title becomes part of a longer absurdist sentence. 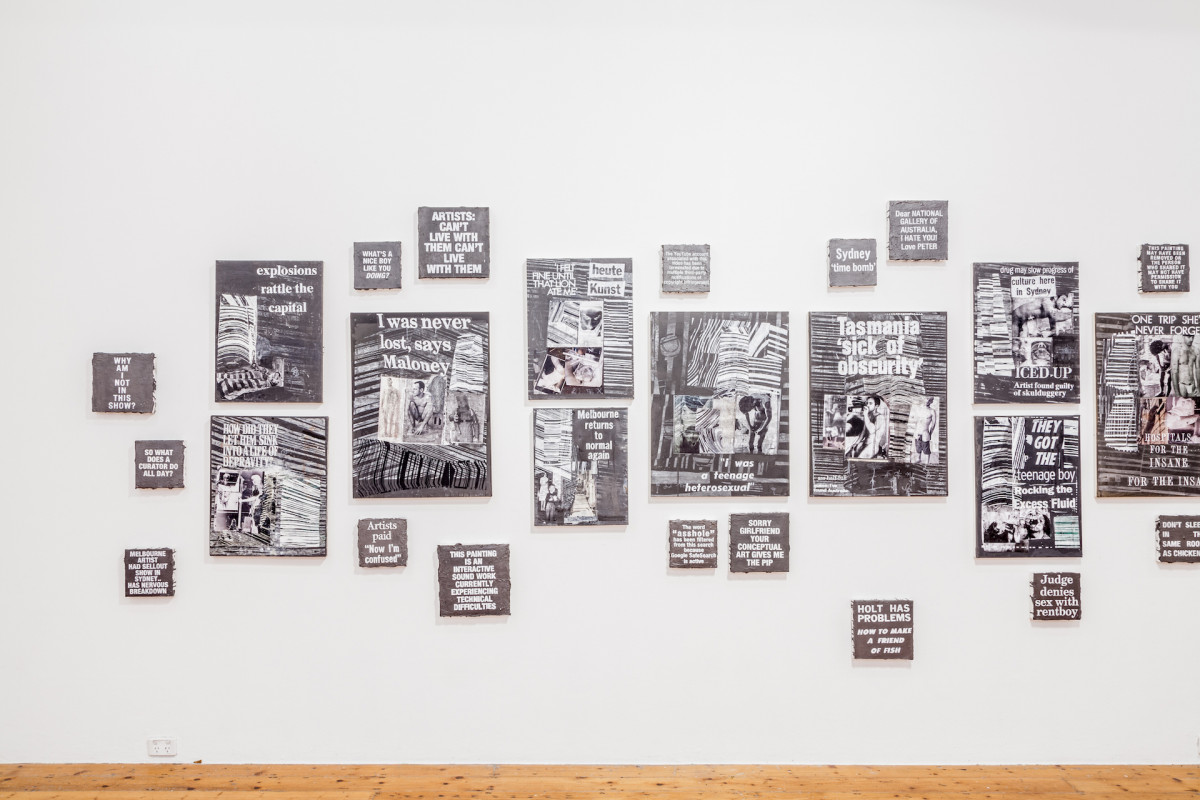 Cut up text and image combinations carry through in a large selection of photographic collage and text paintings by Peter Maloney. The artist incorporates fragments from tabloid newspaper and magazine headlines with homoerotic male nudes and images of implied violence. In small text paintings, digital interfaces such as text messaging and YouTube are re-oriented, where phrases that one would usually encounter on a screen—such as ‘Answer my text you dick’ and ‘The YouTube account associated with this video has been terminated’— are rendered obdurate, un-linked. Parochial art world commentary is also a recurring theme in Maloney’s text works that isolate the clichés of artspeak with an emphasis on the artist (or perhaps painter?) as overlooked and obsolete in equal measure. 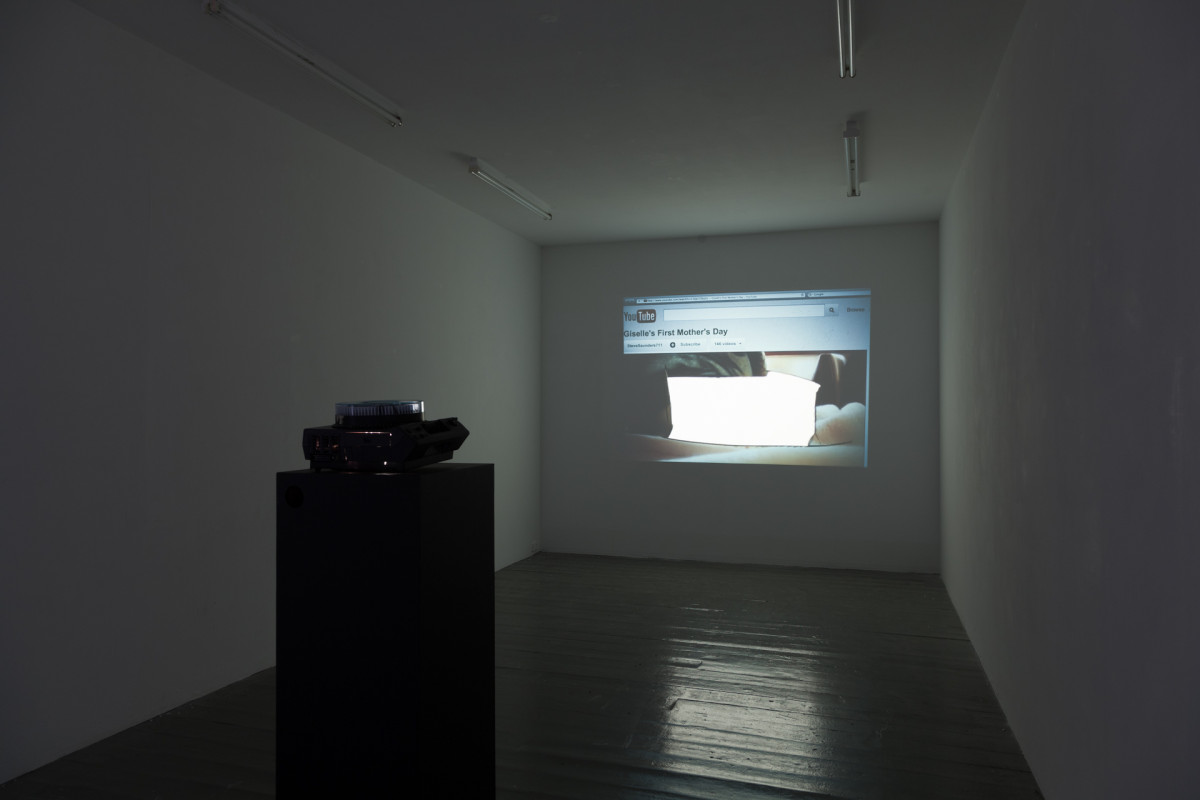 Media obsolescence and its impact on personal archives charges Giselle Stanborough’s installation That really hurts and it’s still hurting (2012). A silent digital projection depicting the artist performing a confessional vlog to camera competes with a 35mm slide projection of YouTube screen captures cataloguing home videos of children called Giselle. As the carousel progresses to the next slide of say “Kite flying at Giselle’s birthday party with her friends”, Stanborough appears like a digital apparition, a ghost in the machine willfully inserted in the interface of the YouTube web browser. The frame where the online home video would have been is cut out in a gesture that feels like a soft violence on the many anonymous Giselles living out their lives online. Created in response to the loss of her childhood photos which were destroyed when her father remarried, her work proffers the speculation that today’s digital phenomenon of ‘going viral’ is a flipside to photography as an analogue memory totem, susceptible to loss and ruin. By intertwining the analogue and digital, Stanborough shows how a past where visual recording was less available to the masses or easily lost through destruction or neglect, dramatically swings the other way though the obsessive documentation evident in ubiquitous user-generated recordings shared in the cloud today.

The structure of Lost and Profound, which is situated in both the downstairs galleries at Gertrude Contemporary and the Studio 12 Project Space upstairs, evoke online digital wunderkammers like Google, eBay and YouTube. It seeks to create a visually overstimulated environment—lots of things to see—in which different temporalities, and varying digital and non-digital realities rub-up against one another and inevitably fall away, akin to the experience of searching for stuff online. Catching objects that are literally falling from the edges of our lives is what these artists do.

Call it romance or nostalgia
The hunger behind our memories
We've buried it in code
—Sam Phillips, 1994 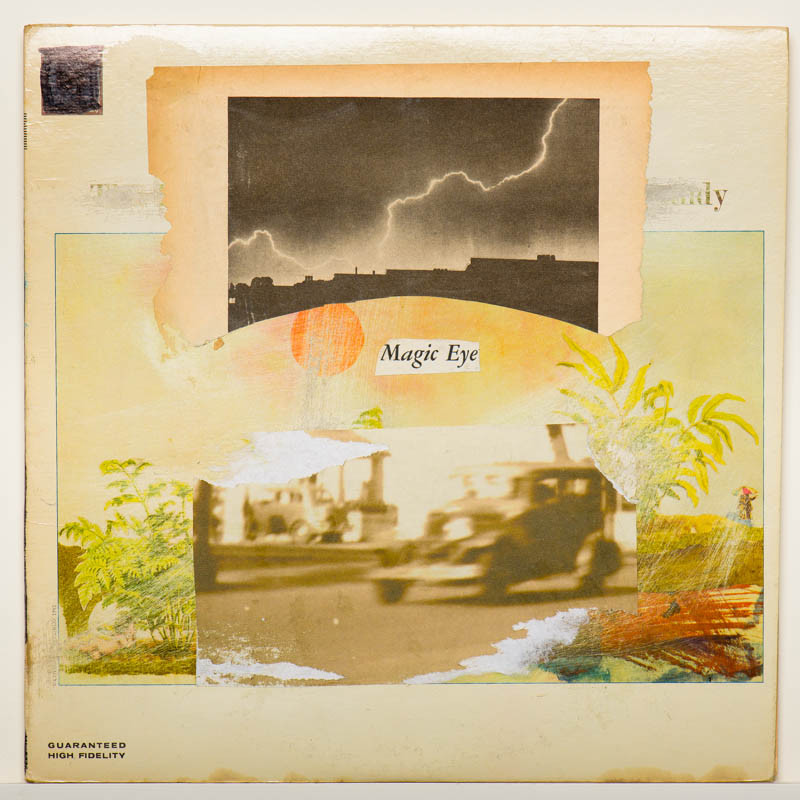 Curatorial catalogue essay for Octopus 15: Lost and Profound at Gertrude Contemporary, 23 May – 4 July 2015.

Published by Gertrude Contemporary in 2015.