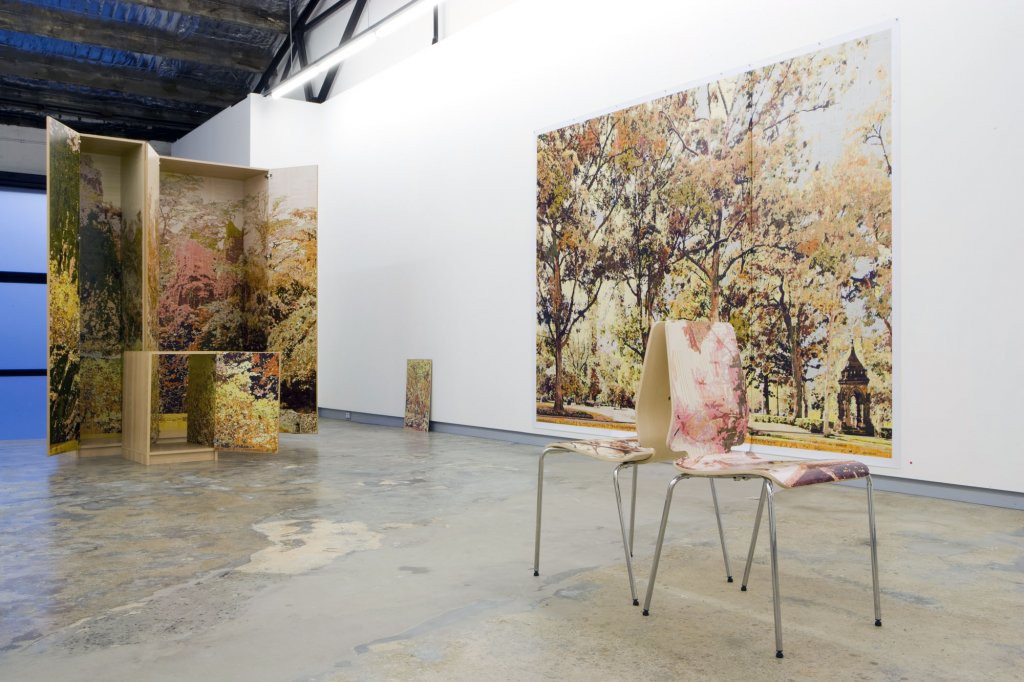 It is only when the territorial organization is upset, reconfigured, and abstracted through autonomous qualities that music can work its intensifying effects on individuals and collective bodies.
— Elizabeth Grosz, Chaos, Territory, Art, 2008

Gary Carsley’s photographs sing, gardens drag, doves cry. For the artist, the representation of public gardens— which in themselves are representations of nature—are like karaoke numbers unable to contain their exploding vortex of multi-lacquered vocal tracks. Parkland territories are reterritorialised in Carsley’s representational schema through a canon-burst of free floating fragments of wood grain contact foils metonymically standing in for nature itself; a kind of ‘upset, reconfigured, abstracted’ supernature where ontology is nothing but a drag ball and realness is choreographed out of recognition.

Two camps of thought are increasingly dividing understandings of art and its capacity to generate meaning: one governed by systems of signification, the other by sensation and affect. Carsley is a rare artist who can effortlessly straddle both with work that critically mines/mimes the discourses of representation animating the construction of the image as a sign in search of a real-world referent. Simultaneously, his images of landscapes convey the vibratory and affective rhythms coursing through the body, with those powering the earth. When you sing along or lip-sync to Carsley’s monoprints of ‘dragged nature’, it is not hard to imagine a backing musical track replete with the hum of insects and chatty birdsong intersecting with the pulsating, primal beat of flesh slapping together after hours in dark parks. This is what we call Bark Art.

For Deleuze and Guattari, writing in A Thousand Plateaus, the marking out of territory occurs through the refrain: where "territorial counterpoints form melodic landscapes". The refrain is the sum of Bark Art’s parts: the sing-song, the clicking finger, the tap, the babble, the impermeable white noise cushioning the body’s relation to the spaces it inhabits, the up-the-garden-path-ness of it all. The power of Carsely’s work is attested by the individual or collective body’s absence, its mere suggestion through the manner by which nature is mediated by the endlessly reproducible photographic image. Carsley’s 21st century take on the photograph casts it as digitally collaged and layered, and crisscrossing timezones to cohere with the 19th century daguerreotype. A photographic image, requiring proper light for viewing and unable to be duplicated, the daguerreotype is restaged in Carsley’s hands as draguerreotype: where the photographic image is substituted by scanned fragments of fake wood, a newly imagined uniquely counterfeit world.