Reviews, Profiles
Houston, We Have a Problem
on Joan Ross

Joan Ross, I like to name everything after myself, 2021
Courtesy of the artist and N.Smith Gallery, Sydney

"The headless birds are about everything at once – about killing what you love," says Joan Ross of her recent works where decapitated birds haunt the images. As part of her November exhibition at the newly established N.Smith Gallery in Sydney (Ross is also represented by Bett Gallery, Hobart), a bird in one image reaches for a microphone in a tree, presumably chirping the work’s caption: Houston we have a problem. Belying the humour of the sentiment, Ross is pointing out where political priorities lie; how we will spend millions going to space while we let millions starve and perish. “Nature is trying to talk – if we continue this way, we won’t have any birds left,” Ross remarks.

Working across multiple media, Ross’s practice has consistently critiqued how colonial thinking and its damage especially to Indigenous people, plants and animals has seeped into every pore of late capitalism’s vociferous desire for accumulation.

Originally from Scotland and practicing as an artist in Australia since the late 1980s, Ross contemporises imagery of the past with witty references to complex contemporary understandings of race, class and gender within a postcolonial frame. With equal smatterings of absurdism and melancholy, her work is characterised by its handmade aesthetic, collaged elements, and recurring use of fluorescent yellow paint as a visual metaphor of encroachment and control.

Sought after and highly collectable, many of her works are housed in public and private collections including the National Gallery of Australia (NGA), Canberra, Art Gallery of New South Wales (AGNSW), Sydney and the Museum of Contemporary Art, Sydney. The colonial impulse to collect as a form of capture and classification is a key theme driving her work.

Ross’s practice is formed by materials gathered as an outcome of her own personal love/hate relationship to collecting. “Often people start collecting things and before they know they are hungry for it,” she observes. 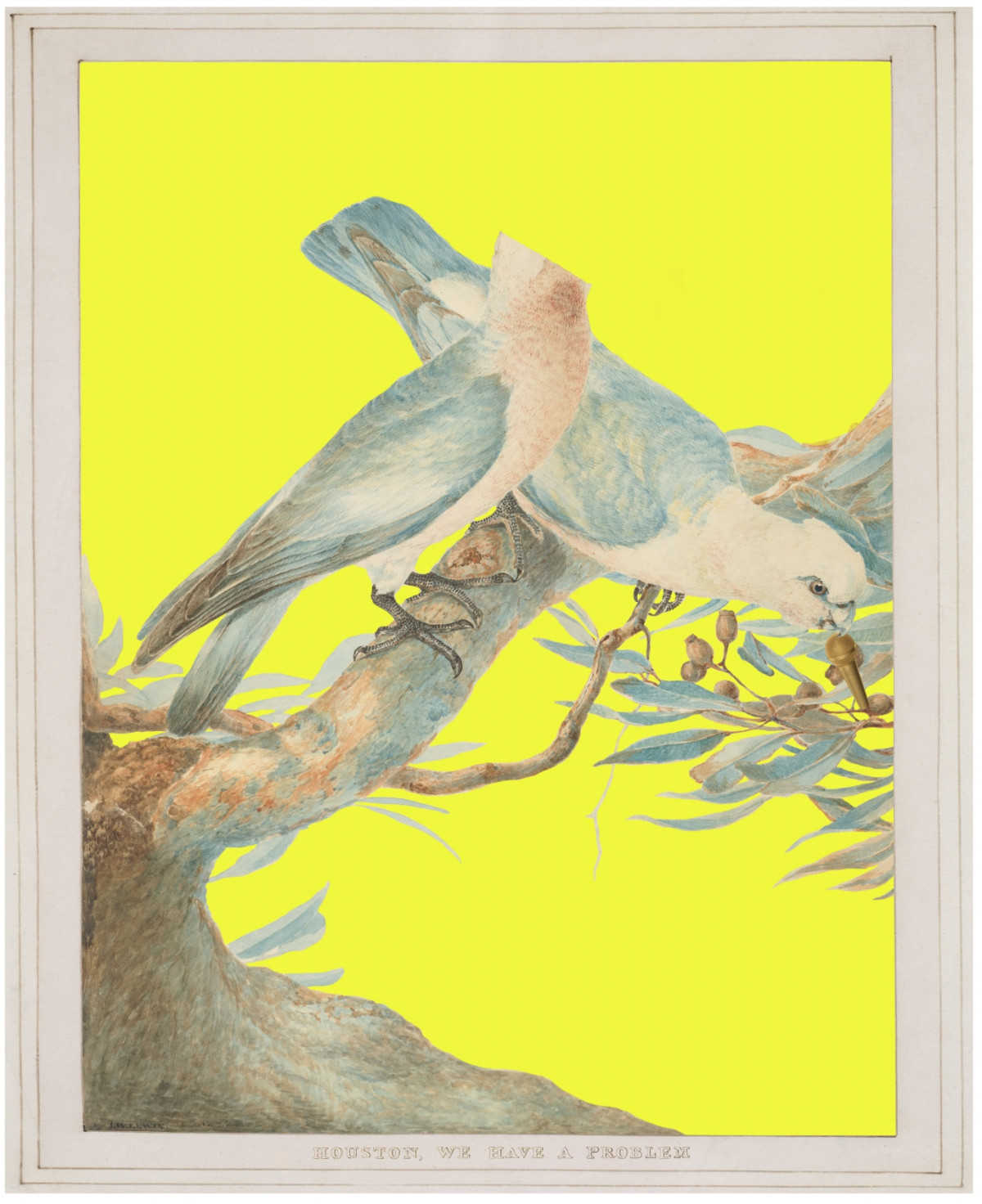 Joan Ross, Houston, we have a problem, 2021
Courtesy of the artist and N.Smith Gallery, Sydney

This internal contradiction stemming from the desire to collect and the damage it can sustain is central to the conversation her work sparks. The damaging effect of collecting in institutional contexts is of particular concern given how the systemic racism embedded in museum discourses from colonial times continues to haunt the present.

As part of the NGA’s Know My Name project, Ross was commissioned to create a projection for the gallery’s façade. In response to the NGA’s collection, her animation Collectors paradise interrogated the entrenched colonial views that still inform collecting practices today. Gently subversive, Ross collapses the museum and liberates not just its imprisoned contents but an entire way of thinking. With Collectors paradise Ross produced “a critique of the museum on the museum”, to paraphrase what gallery director Nick Mitzevich said to Ross when the work was unveiled in February 2021.

Winning the AGNSW’s Sulman Prize in 2017 with the painting Oh history, you lied to me, Ross is consistently challenging the dominant narratives of history. Questioning who writes it, what is written in and what gets left out, Ross rewrites the narrative through her own fictions, acknowledging her own complicity in the process: “I see myself as part of the problem – we are all part of the problem.” Titling her new exhibition after the narcissism of colonial control – I like to name everything after myself – Ross critiques history by obliterating existing tropes with her own recognisable hand. If only Ross, with her enduring wisdom and wit, had written this history in the first place.

Joan Ross, Oh history, you lied to me, 2017
Courtesy of the artist and N.Smith Gallery, Sydney