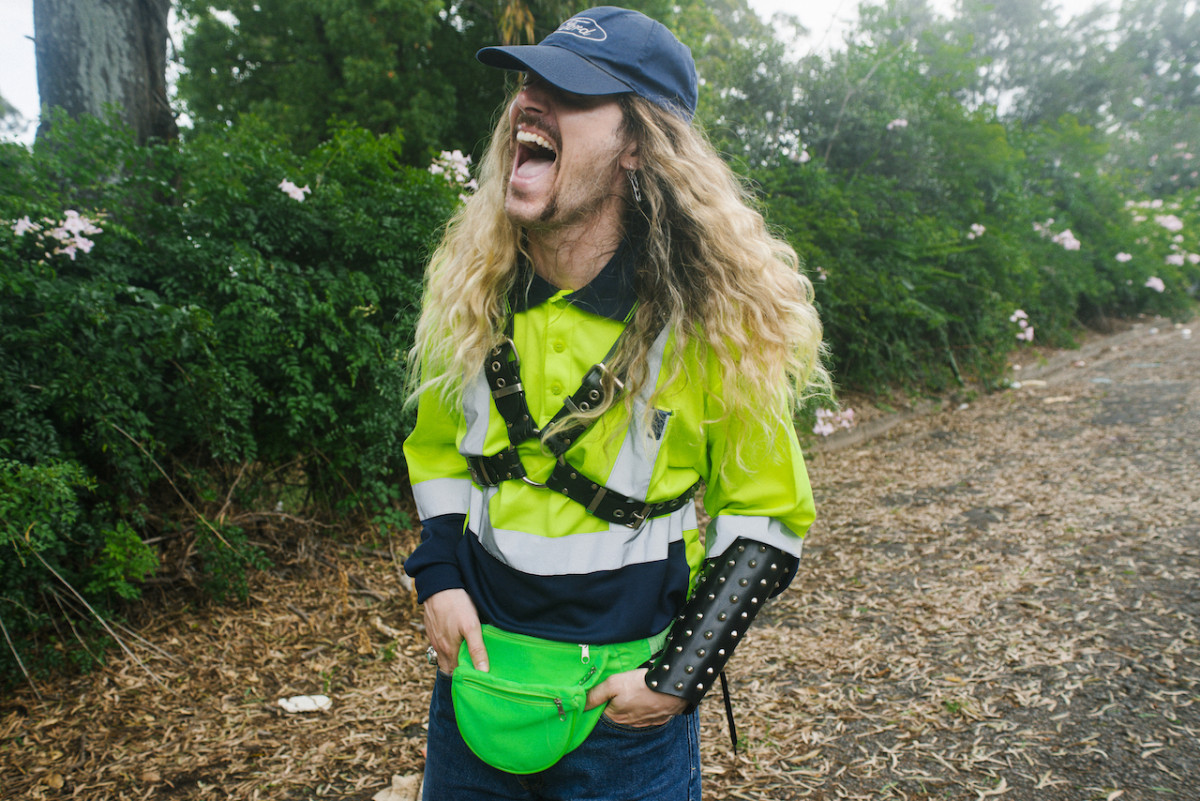 George Tillianakis is many things all at once: video artist, composer, musician, performer, curator, collaborator, educator, facilitator. Despite the collaborative energy vital to these pursuits, he is fiercely independent. A lone wolf with a singular vision, his vast output as an artist over the last two decades has a cleareyed coherence oscillating from a cocky fuck-you attitude – ‘because that’s how I was raised’ – to shoegaze introspection and vulnerability. The title of one of his recent albums, Heavy Petal, sums it up to a tee.

A graduate of the long-defunct art school at Western Sydney University, the Blacktown born and bred artist found a platform for the angst of growing up Greek-and-gay in a mostly hostile ‘westie’ suburban setting. When lecturer and mentor, the late Debra Porch, told him to ‘make the work that you want to see,’ she wasn’t mucking around. To this day her wise words still ring in his ears and guides his thinking and making. ‘It’s the most powerful thing anyone has ever said to me’.

Following graduation in 2003 with the video installation Distilled Distortion, Tillianakis was an instant sensation with solo shows at Casula Powerhouse and Artspace soon to follow. Pulverising personal torment through the lens of queer punk nihilism, riot grrrl feminism and teen-bedroom-dressups, his early work was a cauldron for self-determination and control. Right from the start, his experience of the present has found expression in processing adolescent rage through spiritualism and sentimentality.

George Tillianakis, excerpts from Distilled Distortion, 2003
Courtesy of the artist

In 2008 he staged Back in Black, a major solo exhibition at Blacktown Arts Centre – a cathartic billet-doux to his love/hate relationship with Blacktown itself. Performative tropes first fashioned at art school took flight in this homecoming of sorts, given he was then living back-and-forth between New York and Sydney. Nothing short of audacious, Back in Black was a multi-sensory multi-channel video conduit for a face-painted op-shop drag denizen-cum-rock star. Reckoning with mortality and death via the surfeits of the 1980s/90s media saturated milieu of his upbringing, it is clear looking back how his work was a warm gun aimed at the threshold of a cold new digital frontier. Remember, this was the era of landline dial-up and MySpace was a thing.

Effortlessly melding sound and vision, Tillianakis has long forged a path as a musician. Not a side hustle to being a visual artist or vice versa, both pursuits are part of the same trajectory. They also often feed into his work as curator, from his Soft Pedal sound art happenings at Blacktown Arts Centre (2019, 2021) or his composition work for film or community and disability led projects including Momentum at the Art Gallery of NSW (2015).

George Tillianakis, The Casula Tapes, 2004
Courtesy of the artist

A self-taught musician who plays by ear, he was reared on his father’s love of Rembetika – Greek urban blues music abounding with narratives of hardship and exile. Along with the diverse influences of various non-Greek pop culture fixations, Tillianakis has formed several bands over the years which reflect his musical hybridity. At art school with Jemima Isbester, he fronted the grunge punk duo, Politikal Graphitti. A selection of tracks from their two albums Noise Pollution (2002) and Exit Us (2003) were reprised when they reformed for a rare appearance at Campbelltown Arts Centre’s Space YZ closing party in March 2021.

Aside from other early bands including Rizzo & Pizzo with Byron St John, Tillianakis is best known for his solo work. Composing, recording and performing as either Melodiqa or Chainsaw Melody, Tillianakis has prolific output for both projects. Aside from various singles and EPs, he has released four albums as Melodiqa and three as Chainsaw Melody. In 2021 alone he released an album for both projects, with Chainsaw Melody’s Heavy Petal coming out only four months after Melodiqa’s most ambitious recording to date, Thank You Computer.

Tillianakis invented Melodiqa while still at uni in 2000, though it took more than a decade for Melodiqa’s first album, Flight, to emerge in 2012. Even though he has evolved Melodiqa’s sound over the years, it can be characterised by its 1980s synth-pop analogue warmth. Driven as much by image as sound, the Melodiqa project cleverly concocts stylised retro authenticity against the ambivalent push-pull paces of life in the millennial present.

Though very much a one-man-band operating out of a bedroom studio, Melodiqa has come of age. He sees the music video for Faggot (2017) which starred Ladonna Rama (Tim Hilton) and Liam Benson as a ‘turning point in the way I am making video work now’, explaining the crossroad as a move from the victimhood and catharsis of much earlier work to something more like ‘empowerment’, though he hates that word.

Another milestone for Melodiqa was getting a grant which enabled Tilliankis to employ veteran mastering engineer, Don Bartley, whose long list of credits include Nick Cave and INXS. Bartley perfected Thank You Computer’s lush eighties affectations by recording onto analogue tape and then processing it back into digital form. True to its sonic veneer, Tilliankis engaged Naomi Oliver to create VHS glitch visuals via her music videos for the single Gardenia and a track from the Blind You EP (2020).

Given he works seamlessly across music and art, Tillianakis intuitively grasps the power of the music video as a visual and political medium. His videos can seize one’s attention and amplify the provocation of the music, as in Melodiqa’s clip for Cunt (2018) starring artist Digby Webster. Or they can be far more subdued and introspective. For Chainsaw Melody, his videos are set in domestic interiors, empty streets and skate parks. Divested of inhabitants, his curious gaze and handheld camera peels back the poetics of urban alienation.

Chainsaw Melody formed in 2013 from the ruins of four-piece band My Midnight. If eighties electronic synthesizer music is Melodiqa’s mood board, then nineties guitar-fuzz-grunge is closer to where you get with Chainsaw Melody. He counts The Breeders, Pixies, Kim Deal and My Bloody Valentine as inspo for this project. ‘It’s like architecture to me’, he says of his heroes, acknowledging also ‘the influences of the influences’.

Regardless of whatever form it takes, his output as an artist ambivalently embraces and resists identity or subcultural categories that can easily be ascribed to his work. ‘I’ve never felt connected to a specific scene’, he remarks before listing those within which others have placed him: Greek culture, the gay scene, skater culture, the art world. ‘In Blacktown I don’t feel like I belong; even when I moved to Sydney, I don’t belong’.

‘Not in a sad way’, he impresses. It is more about maintaining the rage through discipline and determination, regardless of the path. He’s no stranger to being an outsider in his own so-called community, and he wouldn’t have it any other way.