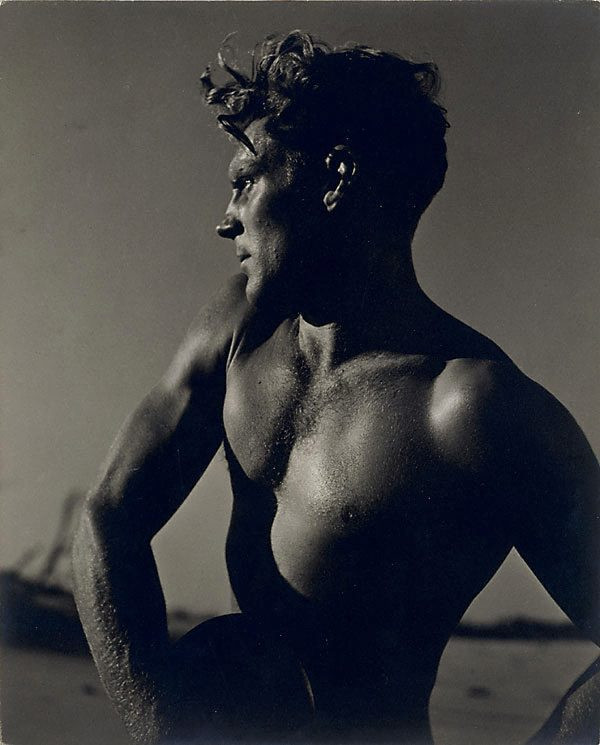 The culture’s privileging of masculinity means that the hegemonic bodily imago of masculinity conforms with his status as sovereign ego, the destroyer... The male body is understood as phallic and impenetrable, as a war-body simultaneously armed and armoured, equipped for victory.
— Catherine Waldby

The paradigmatic ‘straight’ ‘image of man’ is that of a hard body. ‘He’ is active, muscle-bound, well-hung and sexy. The popular representation of the gay male is often a feminising one. ‘He’ is usually represented as ‘passive’, ‘dandy’, ‘poofy’, camp and odd (when sexy ‘queers’ like Rock Hudson came out, Doris Day was not the only woman to be shocked). The hard male body was once considered to be a ‘straight’ body and was covertly worshipped in gay male culture. However, I am not suggesting that the contemporary gay male body is detumescent: in the 1990s we have seen a preoccupation with the beautifully toned gay body. Hard bodies now share a sexual commonality—they can now be either ‘straight’ or ‘queer’. The evidence of the homoerotic hard body was found in the work of many ‘straight’ male photographers. So how is it that the virile male body once represented the idealised ‘straight’ man, and now the hard bodies of these images seem so ‘queer’?

Between the 1920 and 1950s—long before the ‘queer’ magazine Blue hit the news stands—where could the average gay male (if there could be such a creature) find some visual pleasure? The only magazines that were designed for men in this period were tabloids like MAN, which had very fixed ideas about what a ‘man’ was. ‘He’ was straight, white and male—this formula was made apparent by the contents of this magazine. MAN regularly featured caricatures of women sporting the latest in beach wear: visually, MAN was all about woman. MAN was also racist and valorised a white colonial perspective about Australian national identity—terms ‘Abos’ and ‘Japs’ were two frequently quoted examples. MAN had very little to offer a gay man but, ironically, another (mostly) heterosexual site did, and that was the photography of male artists like Max Dupain, Keast Burke, alongside the openly homoerotic photography of George Platt Lynes.

The tension here is that Dupain and Burke were 'straight' artists whose predominant concerns with the male body were paradoxically both heterosexual and asexual. It was heterosexual in the sense that they were representing 'straight' male sexuality, and it was asexual in the sense that these photographers maintained a critical and artistic distance between themselves and their (sexual) subjects. This distance was maintained so that the images remained within the fixed realm of (an assumed) heterosexual representation and their sexuality was not called into question. But how 'queer' it all seems to us now in our body-obsessed 1990s, where the 'image of man' has as many gay associations as it does 'straight'. In reverse, if we are to use two popular Australian magazines, Blue and Australian Women’s Forum as examples, the 'queer' focus of Blue can be a site of visual pleasure for 'straight' women who are looking at the objectified gay male body, or 'straight' men curiously investigating lesbian bodies. The 'straight' focus of Forum, on the other hand, can be a masturbatory revelation for the gay voyeur. The representation of the male body has become so blurred that it can have as much fascination for men as it can for women. The reason for this blurring of sexual representations is the invention of the 'queer'.

According to Eve Kosofsky Sedgwick 'queer' is a movement, not only in the sense that it is a community or a collective, but because it moves in the literal sense: "The word 'queer' itself means across ... The immemorial current that queer represents is antiseparatist as it is antiassimilationist. Keenly, it is relational, and strange."

To be 'queer' is to be in flux, to be passing and moving across sexualities, genders, desires and practices. The benefit of 'queerness' is that it does not allude to the specificity of sex and gender, as 'gay' and 'lesbian' categories do. 'Queer' refers to both the subject (whether individual or collective) and subjectivity (the practices or performances that may be 'queer'). The work of 'straight' photographers, like Max Dupain or Keast Burke, has the tendency to move across sexual contexts, both gay and 'straight', making these images paradigmatically 'queer' and, as Sedgwick observes, 'strange'.

What makes these images even stranger is the fact that there is little evidence as to why photographers like Burke and Dupain were obsessed with the male body. When he was editor for The Australasian Photo-Review (AP-R), Burke regularly published portfolios of his own photographs but he rarely cites any conceptual processes behind the work. Instead, Burke explicitly states his preoccupation with photographic technique and skill. Long before he was editor for AP-R, Burke wrote an article in 1912, with the title 'Two Boys and a Brownie'. In this article, Burke explains his interest in photography as: a recreational past-time, a steadfast obsession with different cameras and a preoccupation with photographic techniques:

I am an enthusiastic walker, and like nothing better during my school holidays than to select some spot of interest, and with a boy friend go on a walking tour, which will include the selected district... I have lately taken an interest in stereoscopic work, owing to the realistic way in which you can almost live your trips over again by means of stereoscopic prints in the stereoscope.

Burke's writing for AP-R was always anecdotal and punctuated with the technical "do's and don'ts" of taking good photos. However, Burke never gives any insight into why he endlessly photographed men. Burke's men were always workers—they had hard bodies, they wielded spears. Burke's images of men were not always virile. One image in particular, Ride Pagliacci (1936-37) depicts a laughing clown, donned in garb and theatrical make-up. Ride Pagliacci could be considered a feminising image insofar as it conforms to the representational stereotypes of the 'passive' gay male mentioned above. The clown provides a stark contrast to Burke's more virile images of the hard male body that contemporary 'queer' culture lusts over.

While Burke concentrated on male workers, Max Dupain’s images of men were quite ambiguous in sexual meaning. Dupain’s timeless image, The Sunbaker 1937, has become a symbolic representation of the bronzed Aussie body. If the Baywatch boys and babes are exemplary of what American ‘beached’ bodies should look like, then Dupain’s image is a more resonant and timeless Australian equivalent. Most of the writing devoted to Dupain, and The Sunbaker, concentrates more on the national iconography of his images, or what David Moore refers to as Dupain’s “rigorous discipline of selection [which] honed the statements to a precise edge.” Like Burke’s work, Dupain’s photographic practice is connected to a history of nationalistic devotion that provided anecdotal, mythological and technical accounts of their photography, before the issues of masculinity were called into question.

The work of American photographer George Platt Lynes, was in direct contrast to the Australian photographic practices of Burke and Dupain. Lynes was an ‘out’ homosexual who worked prolifically as a photographer from the 1930s until his death in 1955. Not unlike Burke, Lynes also edited a magazine for most his working career. However, while Burke was content working as an advocate for the Kodak vehicle, AP-R, Lynes was a dedicated fashion and portrait photographer who worked as an editor for Vogue from 1945 onwards, while also regularly contributing to Town and Country and Harper’s Bazaar. The work of Lynes was obsessed with the ‘queer’ male body and celebrity portraiture. You could say that Lynes was the Robert Mapplethorpe of the 1930s and 1940s, except he did not have to deal with the interrogations of right-wing politicians. The male nude was a central force in Lynes’ photographic career. Lynes captured hard male bodies on film with a neo-classical approach in mind. His images were black and white landscapes of tangled male bodies that insinuated “elements of individual isolation, sexual conflict and erotic tension.” The photographic practice of Lynes was not afraid to openly depict the issues of ‘queer’ representation that I have discussed so far. The images represented both the hard male body and the ‘passive’ male ‘dandy’. According to many of Lynes’s biographers and critics, the artist himself encapsulated the paradigmatic dandy of his time: “he wore American work clothes as a working costume and diplomatic uniform almost earlier than anybody else. He was a physical, not a social snob.” His images celebrated the male body, in a diverse range of ways: from the staged choreography of dance, through to the genre of portraiture that has become so important for recent popular culture celebrity commentators like Annie Liebovitz, Herb Ritts and Bruce Weber.

The work showcased in The Image of Man primarily concentrates, with some exceptions, on the hard male body. Though the photographers in this exhibition were mostly a collective of ‘straight’ male photographers, their work can easily be read as ‘queer’. I doubt that any critical thought would have been granted to the homoerotics of this work between the period of 1920 to 1950. However, late in the 20th century, the work presented in The Image of Man moves across sexual contexts, both gay and ‘straight’, providing visual pleasure for men and women alike—making the work both quintessentially ‘queer’ and ‘strange’.

Furthermore, we are left to question why so many ‘straight’ photographers of this period were obsessed with the male body. I am not suggesting that photographers like Burke and Dupain were ‘queer’ men, but it is ironic that their work provides a timeless example of what constitutes sophisticated ‘queer’ photography.

Essay for exhibition catalogue for The Image of Man: Photography and Masculinity 1920–1950, curated by Judy Annear, at the Art Gallery of NSW, Sydney, 7 February – 6 April 1997.

For this project I was engaged as the curator's Research Assistant.

Published by Art Gallery of NSW in 1997.