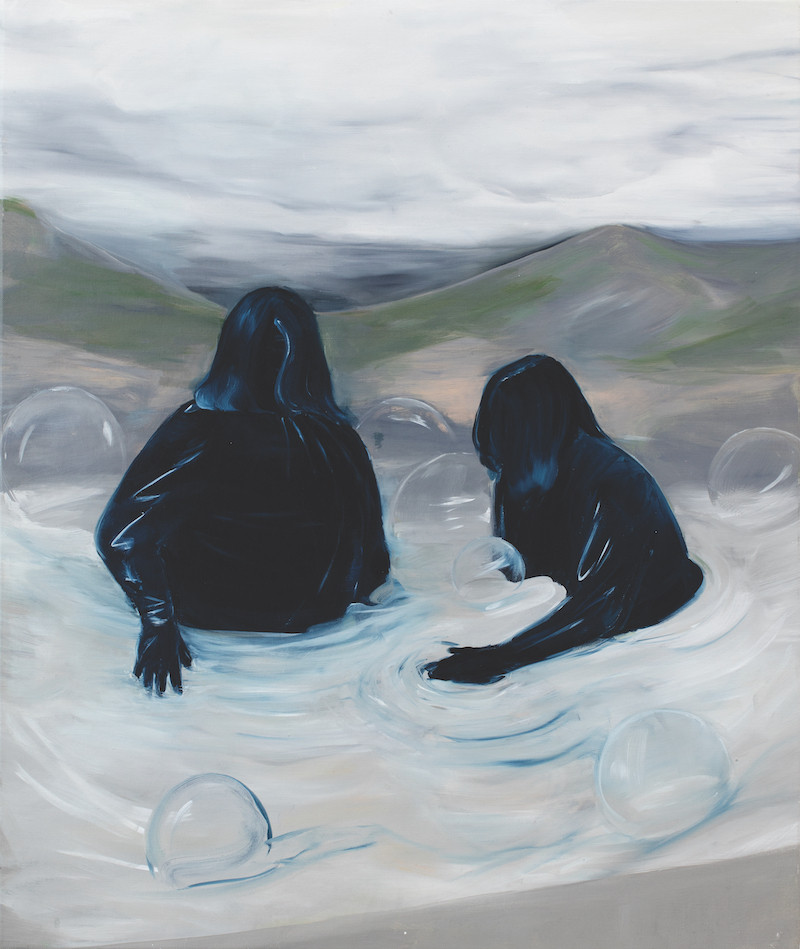 “Painting creates its own reality,” is Jelena Telecki’s reply after I ask where her imagery derives. She rarely uses material that already exists in the world. After a long process of thinking, her visual language comes to life through a disciplined period of making. Once she sets brush to canvas in the studio, the paintings manifest quickly but intensely.

“I’m a gimp to painting,” she remarks casually. “What painting wants, painting gets.”

Telecki’s anticipated solo exhibition at Sarah Cottier Gallery, Incidental Collaborators, comprised a suite of paintings that depict shadowy figures engaged in mysterious acts. An ominous psychosexual atmosphere pervades these elliptical scenes, made compelling by a sense of tacit personal knowledge contained therein. Hermetically sealed, the paintings reveal themselves over time, afforded by a potential for multiple readings. And yet despite their ambiguity, Telecki is often surprised by what viewers project on to them.

For more than a decade, Telecki has built a following for her unique personal take on history and representation, flavoured by the uncanny and absurd. Migrating to Australia from the country formerly known as Yugoslavia, she reveals that life before coming to Australia was difficult and filled with trauma. “We were refugees, we had this horrible tragedy in our family that I witnessed, a lot of sorrow and sadness, this feeling that things cannot be mended.” In this respect, she recognises a sense of loss coming through in the work that is nevertheless tinged with a spark of optimism. “I think of it as a gift rather than a hindrance to who I am”.

Telecki cut her teeth in artist-run initiatives such as Firstdraft and 55 Sydenham Rd – at the latter she was an artist in residence and contributed to the program committee from 2015 to 2018. Her career has built momentum from inclusion in NEW14, curated by Kyla McFarlane at the Australian Centre for Contemporary Art, and from being shortlisted for the 2018 John Fries Award at UNSW Galleries and the 2019 NSW Visual Arts Emerging Fellowship at Artspace. While she has exhibited at commercial galleries such as Gallery 9, COMA and STATION, her debut at Sarah Cottier Gallery in August 2020 felt like a threshold moment, signalling newfound maturity and strength in her work. Arrival and survival commingling to form an exhibition that was successful conceptually, but also commercially. Priced between $5,000 and $9,000, Incidental Collaborators was a sell-out show.

Hinting at work in development for an embargoed project, her thinking for future work is moving towards solitary experience and the infinite world of psychic projection thereby enabled. She explains by way of an anecdote: “I’ve been coming back to this thing I used to do as a kid, when bored and waiting for something to happen. I would lie on the floor and imagine I could walk on the ceiling”. While her Cottier show presented collaborating figures fixed by the scripts of their own power plays, it sounds as if a sense of freedom, release and escape will animate what is yet to come.

Published by Art Collector in 2021.