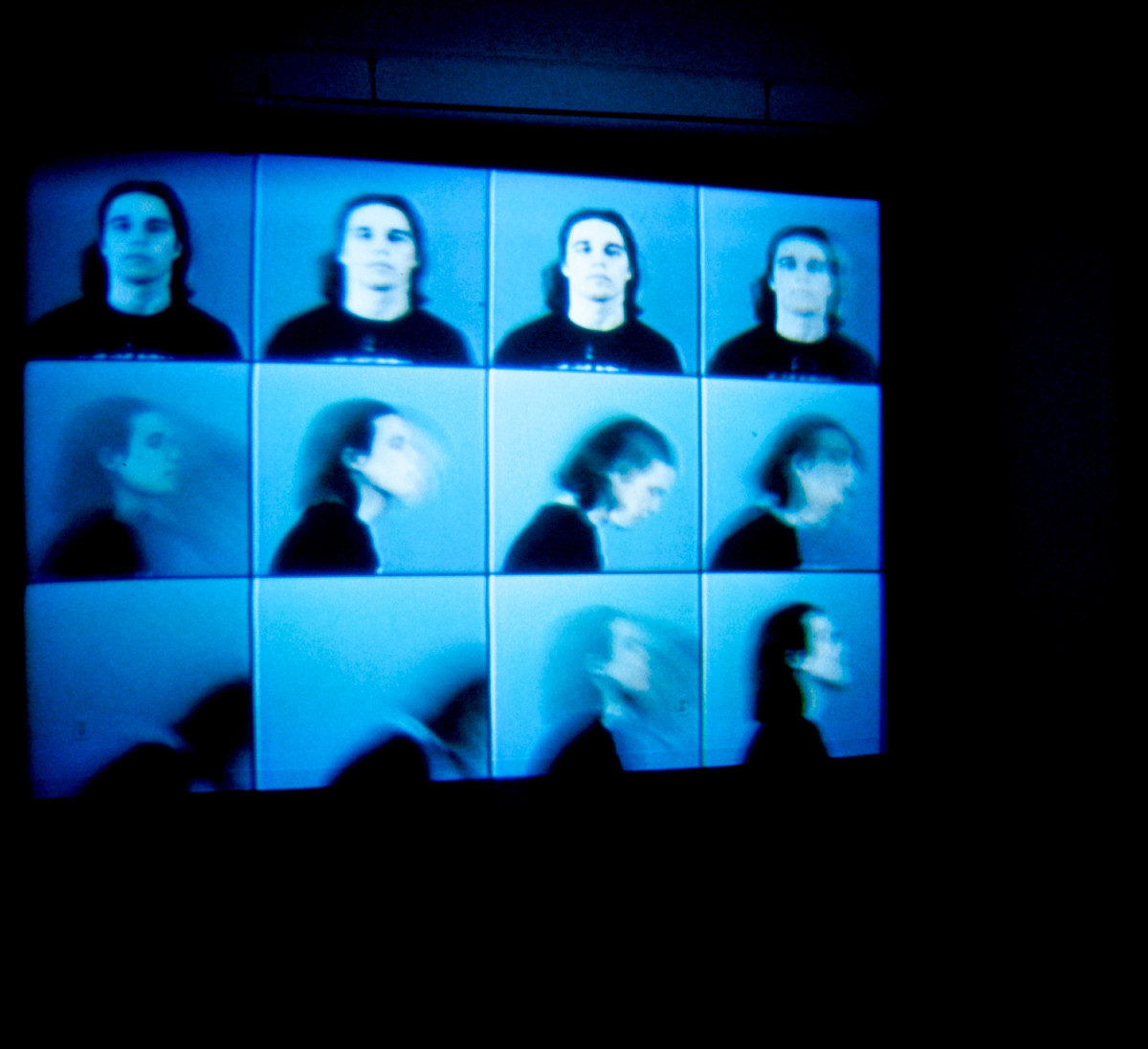 The poster design for this year’s Sydney Gay and Lesbian Mardi Gras Festival was comprised of fruit: a banana, two dangling cherries and a lemon. This kind of cheap visual gag does little to destabilise the clichés or norms that are part of the territory of this cultural event. But maybe the designer didn’t want to achieve this anyway. The current debates surrounding the notion of ‘queer identity’, were, however, effectively challenged by three of the Festival’s visual arts events, Passing, Juice, and Queer Crossings.

The Australian Centre for Photography presented two artists from New York, Leone and Macdonald, who showed a video installation that was, as its title suggested, about ‘passing’. The large-scale series of video projections effectively destabilised certain norms about identity politics that often resist simple categorisation. Using the technique of computer-generated morphing, these images detailed the constructions that define identity, and as a result called into question the slipperiness that characterises the link between contemporary art practice and identity politics.

Passing was reminiscent of Michael Jackson’s video clip for Black or White, where gender and racial difference was blurred through digital manipulation. Michael Jackson’s studio produced video played with the slightly outdated technique of computer-generated morphing. Passing was an accomplished exhibition that posed important questions regarding the notions that arise when one ‘passes’ as an identity distinct from the ‘original’ identity; the defining subject being digitally enhanced or changed. The sound quality was disappointing, but overall, Leone and Macdonald produced a sophisticated and subversive presentation.

The Ivan Dougherty Gallery presented a rather hybridised show entitled Queer Crossings which also challenged the buzz terminology of identity politics. The curatorial framework questioned the validity of terms like ‘lesbian’ and ‘gay.’

A strength of this exhibition was that it included a diverse cross-section of artists, including Maree Azzopardi, Adam Cullen, C.Moore Hardy, Fiona Macdonald and Lachlan Warner among ten other contributors. A particular highlight was Kaye Shumack’s photographic series That Godard Thing. Not dissimilar to her previous work, which visually redefined the notorious and mythologised lifestyle that characterised Andy Warhol’s art practice, Shumack’s series appropriated the stylistic genre of Godard’s cinematic oeuvre, rendering her images as fictional film stills that had a sophisticated queer subtext.

Queer Crossings was a timely exhibition insofar as it successfully represented the multiplicity of ideas that have emerged in recent gay, lesbian, and queer cultural practices. Its inclusion in the Mardi Gras Visual Arts Program was important because most of the work in Queer Crossings resisted the clichéd representation of identity politics that often dominates a majority of the Festival exhibitions. Queer Crossings endeavoured to provide a framework around the slippery and often academic notion of ‘queerness.’ With the exceptions of some rather odd inclusions, Queer Crossings was exciting.

‘Queerness’ is not an easy notion to comprehend, define or represent. Eve Kosofsky Sedgwick advocates succinct and often humorous definitions of what queer means in theoretical (and biographical) terms. For Sedgwick, writing in her book Tendencies, ‘queer ... can’t be subsumed under gender and sexuality at all: the ways that race, ethnicity, postcolonial nationality criss-cross with these and other identity-constituting, identity-fracturing discourses, for example.’ Regarding Queer Crossings, the queerness that was represented was not necessarily preoccupied with only gender and sexuality, but the other factors – racial identity for instance – that define queerness.

Curated by Wayne Tunnicliffe for the Art Gallery of NSW, Juice was one of the most intelligent exhibitions of the Mardi Gras Festival. Comprised of work by three artists, Christine Dean, David Rosetzky and Jane Trengove, Juice attempted to subvert some of the masculine and heterosexual bravado that is associated with monochrome painting and object art.

In her series of paintings, Aspic Realism, Christine Dean referred to a long history of monochrome painting, and positioned herself within this tradition by ‘queering’ it. Dean does this through her use of colours and materials. One blue and the other pink, Dean’s paintings refer, on an obvious level, to the visual codes assigned to gender. Dean’s canvas – a chenille bedspread – places the work within the private sphere of the bedroom, or what Tunnicliffe calls the ‘bastion of heterosexual privilege where strict gender divisions are enacted and reinforced through “family values” sex.’ The correlation of monochrome painting with the supposed domesticity of the private sphere, is a camp combo that attests to the wry sense of humour at work in Juice.

A similar formalism is apparent in Rosetsky’s work, where a video of a young man receiving a facial and a painting of flesh tones poke fun at popular mythologies associated with both male homosexuality and the beauty industry.

Placed between these two installations, Jane Trengove’s furry toys, Sex Fluffies, entice the viewer with their demands to ‘stroke’, ‘blow’, ‘squeeze’ and ‘enter’. But the impression here is that Trengove’s sculptural blancmange of materials may act as a kind of mouse trap, biting the finger that tickles it.

The works presented in Juice formed a stunning ensemble because the curator had brought his contributors’ concerns together with cohesive elegance. The Mardi Gras Festival, being comprised of trajectories that clash and intersect simultaneously, worked in a similar way. The collective aesthetic did not suffer because most of the individual components were good examples of contemporary queer art practice.