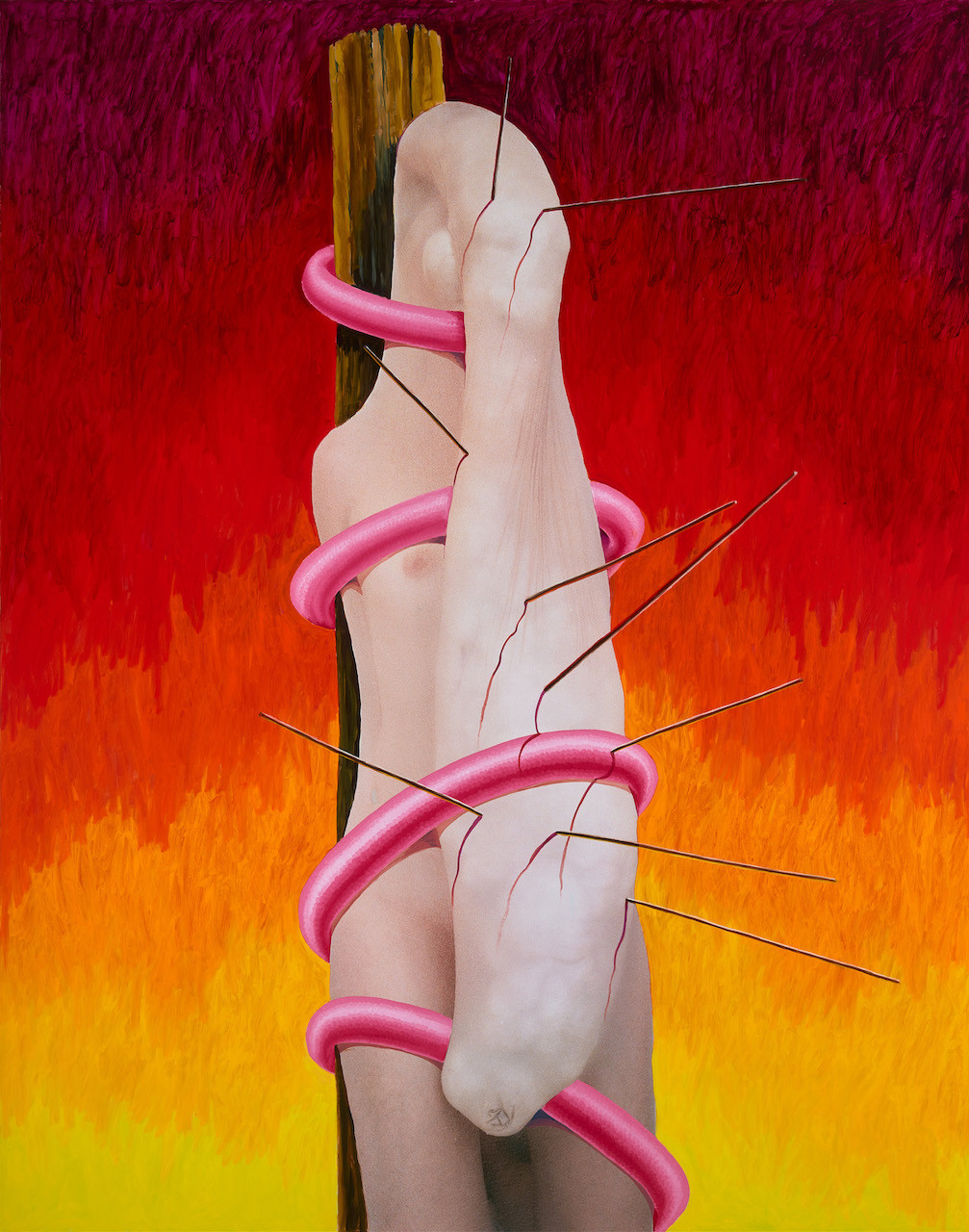 ‘All he ever did in life was arrive,’ says Philjames of Jacques Brel’s J’arrive (1968). Naming his new collaboration with Polly Borland after a lyric from Brel’s song, Philjames asserts that it has nothing to do with the work, acting rather as an ambiguous soundtrack to the existential longing humans propagate around not just ‘arriving’, but making a mark in this life.

Early in his career Philjames was a street artist who did exactly that: make a mark. Literally, with tags and a spray can. He became known for his pop savvy interventions into Sydney’s urban streetscapes through bombing antics that became infamous over time, despite their ephemerality. His street art methodology gradually started informing work made for white cube contexts. ‘Defacing’ vintage op-shop lithographs with appropriated cartoons, Philjames would seize upon found imagery from clashing eras to manifest retrofuturistism as sociopolitical commentary.

Moving from found lithographs to photographs for The TV Show at Wollongong Art Gallery (which I curated in 2018), the first picture he painted over was a snapshot depicting the artist with his two siblings watching The Dukes of Hazard on the telly in the early 80s. On screen is a closeup of the General Lee, the Confederate flag emblazoned vehicle featured in the series. Commenting on how white right-wing propaganda fashions young minds through sugar-coated media images, Philjames haunts this otherwise nostalgic domestic scene with racist Disney characters as leering demonic avatars.

And that’s when Philjames met Polly Borland. Appearing together in a group show in late 2018, they hit it off. Soon after Borland invited Philjames to use his trademark cartoon vandalism to fuck with her portraits of two of the most powerful – and caricatured – political celebrities of our time: Donald Trump and Queen Elizabeth II.

Corrupting both with cartoon debris, Philjames retrofits their image with the connotations of monstrosity that lie barely buried beneath the surface of their well-rehearsed personas.

From Chrysanthemum, to Chrysanthemum extends their collaboration into new and unexpected territory. Using a selection from Borland’s 2018 series Morph as the starting point, the parameters of this new series formed when Borland proposed he avoid the appropriation of known cartoon tropes. Morph’s monochromatic palette and fleshy, bulbous forms were to become the substrate for Philjames to summon his own monsters.

The polymorphic sexuality of Borland’s ambiguous creatures is inherently aberrant and monstrous. Lurking in the psyche as vestiges of the unconscious, their shapeshifting capacity is both emotional and corporeal with Borland orchestrating their vaguely human form as an exercise in empathy. The otherwise blank canvas of their stretchy nylon ‘skin’ is a palimpsest where our desires, fears and expectations can be etched – the perfect readymade canvas for an artist like Philjames.

Melding Borland’s menagerie of monsters with his own, Philjames applies a new skin to the image, describing the process as intuitive and automatic. Interpreting Borland’s forms like Rorschach inkblots, he set out to enhance and destroy the existing figuration with absurd technicolour humour. Knowing that one of Borland’s influences for Morph was Pink Elephants on Parade, the bizarre song sequence from Dumbo (1941) depicting hallucinating cartoons, Philjames incorporated a riff to the – yet again racist – Disney animation. Appearing as the only recognisable nod to an existing image, it divulges a shared visual language for a history of pictures and the horror they yield. In coming together, their shared vision aims not to sustain the horror but to transmute it. Once confined to art, it might just be possible that the horror can be contained.

Published by Nicholas Thompson Gallery in 2021.