In June 2001 I was visiting New York City and was invited to meet pioneering feminist artist Carolee Schneemann. To cut a long story short, I turned up at Ms Schneemann’s West 29th St loft studio very late because I had hopped on the wrong subway. Being late only increased my nerves, because after all, it’s rare to find oneself in the presence of a truly iconic art star, especially one with such a famous interior scroll. As it turned out, I wasn’t late at all: in New York being half an hour late is a fashionable marker of punctuality. While being escorted on a tour of Ms Schneemann’s studio, I stopped in front of one series of photographs, where she is seen engaged in a rather passionate kiss with her cat Clunie. I was lost for words, so I asked Ms Schneemann if she could tell me a little bit about Clunie. With renewed interest in her Australian guest, Ms Schneemann said: ‘You see I collaborated with Clunie, or should I say, Clunie collaborated with me, up until his death …’ I don’t recall how or when he died, though I know she told me. I remember being a bit disturbed by the way she described their relationship as one that was framed by a degree of artistic collaboration. Thinking back on this strange meeting,  Ms Schneemann’s relationship with the late Clunie was not as silly as I had made out. Surely collaboration can traverse human borders (though it may be an isolated incident). Whatever the case, it sure got me thinking about the relationship between art practice and the often used term collaboration. How do artists collaborate with one another? And what happens when these collaborations resist — or exist outside of — a normative heterosexual union?

Collaboration is welcomed by artists for many and varied reasons. Why go solo when you can share labour, concepts, expenses and exposure? Even everyday life is a collaboration of sorts, and the domestic sphere can produce some of the most interesting ‘work’, particularly for artists whose sexual preference is for, well, other artists (or dare I say it, domestic pets). Collaboration between artists is nothing new; it was a particularly celebrated activity during the conceptual hey-day in which Ms Schneemann’s most iconic works were produced (the late 1950s-late 1970s). Charles Green’s recent book The Third Hand outlines some of the paradigm shifts that occurred in artist collaborations from conceptualism through to postmodernism. When discussing artist collaborations, it is virtually impossible to disregard the ways in which self-representation consciously or unconsciously drives the art-making process. Green writes that ‘artists have always conceded and exploited the inevitability of implicit self-representation’. Artists always appear in their art, and are always engaged to varying degrees with the politics of identity. Of course I have phrased this as a deliberately broadsweeping comment. While many artists may self-consciously resist the politicisation that drives implicit or explicit self-representation, it is rare in the twentieth (and twenty-first) century for one’s work to be read outside of a framework of identity politics.

Nowhere is this more apparent than in the queer art community. To be associated with a festival like the Sydney Gay and Lesbian Mardi Gras is to acknowledge the way identity comes to figure in one’s art practice, and vice versa. For Green, ‘artists are thieves in the attic… rummaging in dusty, dark rooms, where variations of authorial identity are stored away from view. This runs counter to the conventional idea of the lonely artist passively waiting for inspiration’s light bulb to be turned on’. I agree that the more successful idea of artist-hood lean towards the former, more scholarly model. But why is this described within such closeted terms? For me, the ‘attic’ is a variation on the closet, suggesting artists rarely get enough daylight, elicit a musty odour and must steal the knowledge of authorial identity from dark hidden places.

Admittedly, the latter model of the lonesome artist hero is a cliché, but inspiration’s light bulb is often not such a spontaneous explosion of light and energy. Rather, inspiration may be produced through the collaborations that make up everyday life. The one form of collaboration that interests me is that which exists between same-sex artist couples. In Green’s book, straight artist collaborations like Christo and Jeanne-Claude, and Marina Ambramovic and Ulay are dissected alongside the homo dandyisms of Gilbert and George. While Green’s overview of these artist collaborations are fascinating, it left me wondering exactly how these couples negotiate particular issues to do with the very act of working and living together. Perhaps I wanted more insight into the biographical ­—  something any art historian would be reluctant to admit. 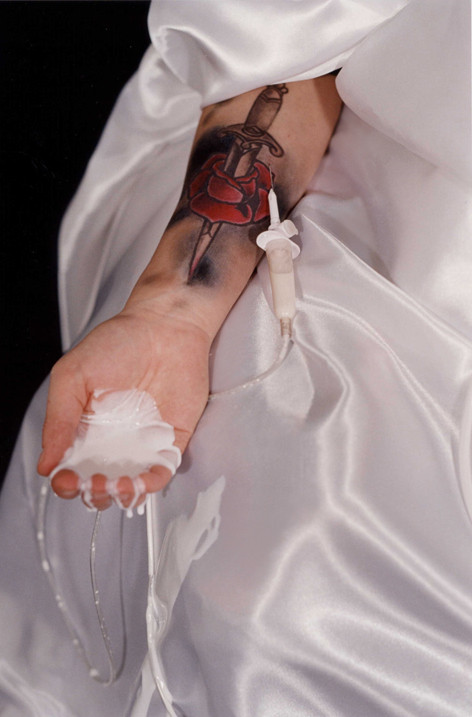 Most of the work in Flaming Muses was specifically produced for this exhibition. I asked each couple to consider the ways in which the processes of collaboration were being utilised, and what that meant for both their work and their relationship. As a result, Flaming Muses is made up of two different processes of collaboration. The first consists of artists who work closely together on every stage of the collaborative process. In this instance there is no real division of labour, meaning each and every element of the work has been produced in harmony. If the first can be likened to a harmony, the second form of collaboration is like a duet, meaning both artists take turns with the proverbial microphone, building a melody from two distinct voices.

Flaming Muses marks the first time José Da Silva and Tim Plaisted have collaborated. Working closely together on each aspect of their work, Takes King (2002) compares the game-play of chess to the struggle for autonomy that exists in relationships. The phrase, ‘takes king’ invokes the final state of play in which the opponent’s King is seized. In a queer context, ‘taking king’ suggests either an emasculation, or a sexual triumph enacted in the struggle for power. Man Ray once noted that chess is an intense activity of which no trace remains, due to the lack of markings that chronicle movement across the board. Queer relationships are also difficult to trace because they lack the legal markings that socially fix partnerships. José and Tim delight in the knowledge that like chess, partnership and collaboration is often traceless and transient.

Monika Tichacek and Emma Price are no strangers to collaboration: their Elvis-inspired installation Homecoming King (also at Performance Space) was part of last years’ Mardi Gras festival. In their new piece Intravenous (2002), a large-scale video projection depicts a digitally manipulated performance without motion. The image references the Madonna and Child, except in this case the Madonna sits childless. Like a life support device, the Madonna extracts nutrients from a drip inserted into her rose tattoo. Although alone, the Madonna’s face elicits a duality, in that she is a composite of both artist’s faces. The nurturing twin-persona of Madonna and Child exists within the one identity and act as a metaphor for the ways self can merge into other, and difference into sameness. For Monika and Emma, the process of collaboration is a transformation of two autonomous beings into a singular unit.

Jane Trengove and Susan Long often collaborate and suffuse their practices so that neither dominates in the art-making process. Exploring ongoing themes of visuality, Microfiction (2002) comprises a painting of an ear, and a video piece depicting a paintbrush in action. The painted ear has been brought into being by the brush, in much the same way erotic touch renders the body conscious and wanting. A paintbrush at work usually elicits macho modernist connotations, but Jane and Susan feminise the action as one marked by same-sex desire. The brush becomes a metaphor for touch, allowing both painting and video to brush up against each other in unexpected ways.

For some of the couples, collaboration is a process of sharing the labour and concepts. Amanda James and Jen Skattebol have produced Belly Button (2000-01) a photo essay that represents their son’s IVF conception and birth. Amanda’s camera documented Jen’s every pregnant move, while Jen provides a text component describing the experience. The collaborative experience is not merely word and image, but the physical reality of their beautiful baby Gus, whom they describe as ‘a progeny of desire, panic, politics and endless prodding by members of the medical profession’.

On March 25, 2002, Ron Adams and George Adams celebrate their thirtieth anniversary, an auspicious event for a couple who met when they were only thirteen years old. Ever since they met, Ron and George have been collaborating. When it comes to their art, Ron executes the painting and George acts as conceptual producer. For Flaming Muses, Ron and George present Voss (2000), a painting inspired by both Patrick White’s epic novel, and his similarly epic relationship with Manoly Lascaris.

Scott Redford and Lyell Bary’s process of collaboration is like an ongoing conversation because Scott contributes a poem in the form of four pieces of text, while Lyell interprets them with poster paints. The result, Untitled (Ian) (2002) is an enigmatic series of four paintings that use a different colour and text for each panel. At first glance these subtle texts merge into the fluid forms. One of the texts, ‘Ian Thorpe’ gives away the identity of which this work is inspired. The other texts, ‘Air + Water’, ‘Guiltless’ and ‘Unlimited’ describe Scott and Lyell’s perception of the athlete. Scott says, ‘We just like Ian as the rest of the country likes him. We feel an ownership over him I suppose. I wouldn’t say he was a muse, he’s just fun to have in the world’.

Flaming Muses sets out to initiate a dialogue about collaboration and partnerships within a same-sex orbit, something which requires the capacity to think beyond imposing hierarchies like artist and muse, artist and art, or even in some wacky cases, artist and pet. Although we await legal recognition for our partnerships, the six couples in Flaming Muses set fire to those rumours that dare suggest the demise of creative, productive queer relationships.

Published by Performance Space in 2002.