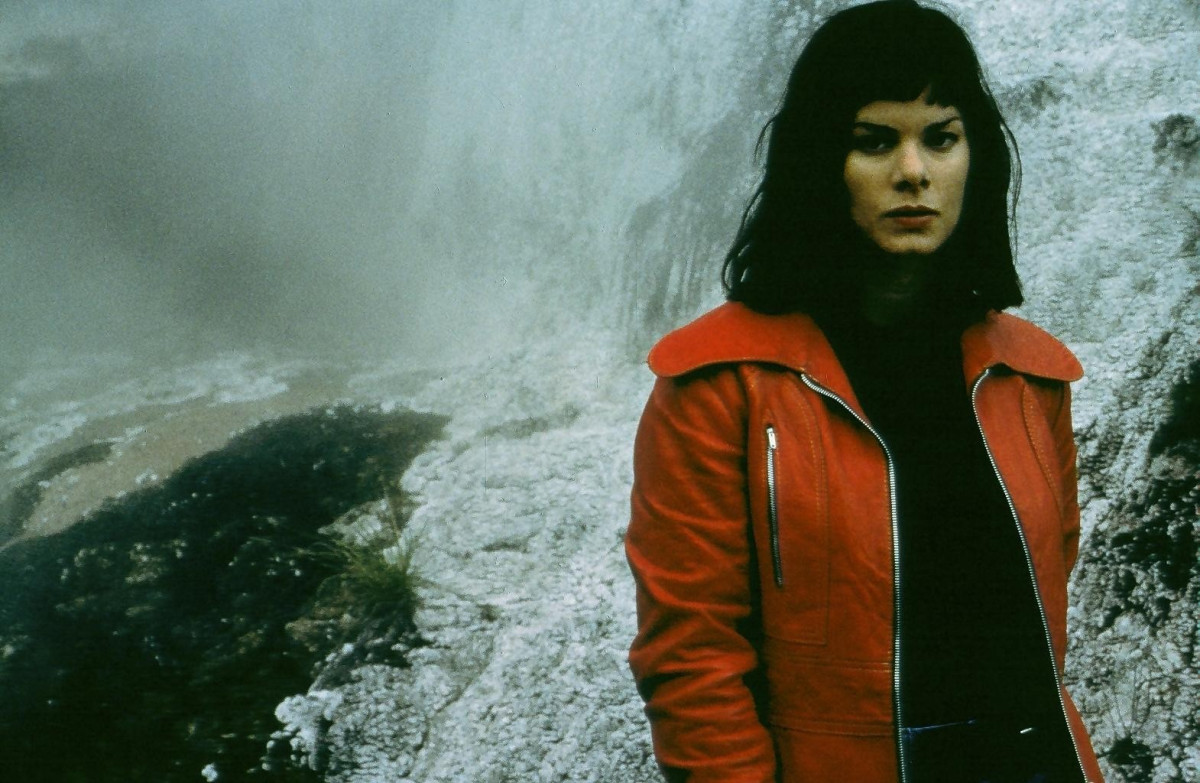 Sprouting from the dirt-sucking orifice of a kitchen sink is a strand of wiry black hair. A woman (Theresa Healey) tugs at the refuse in an attempt to restore domestic order. As the hair is pulled out, a rope-like umbilical cord is revealed. Attached to the cord is an ambiguous life form. Birthed by parthenogenesis from the banalities of domestic labor, the creature is a little Frankenstein, readymade for the woman.

In her acclaimed horror short Kitchen Sink (1989), Alison Maclean examines the disorienting experience of simultaneous attraction and repulsion. It is not without conceptual purpose that Kitchen Sink is coupled with her debut feature Crush (1991), as a special feature on the “director approved” Strand Releasing DVD. Crush restages the horror of Kitchen Sink in a setting where eruptions of Otherness are barely contained, if also erratically effective.

The opening scene of Crush is a close-up of eruption at work: boiling mud that creates bubbling, pockmarked formations on the earth’s breathing surface. Seductive like chocolate sauce, it’s an image that is “kind of humorous and a little frightening,” as Maclean explains in the audio commentary. Like Kitchen Sink‘s horrific umbilical rope, the mud in Crush is abject, primal refuse that wages a tug of war between the powers of horror and seduction.

Destructive but entrancing, Lane (Marcia Gay Harden) is like that mud. An American road tripping through New Zealand with longtime friend Christina (Donogh Rees), Lane’s face registers a mix of hostility and playfulness — her blood red lipstick pierces through the wintry rural setting. Christina is on her way to Rotorua to interview a writer named Colin (William Zappa) and Lane tags along. As they eat fried chicken, Christina asks, “Do you want my skin?” Like a cannibal whose appetite extends beyond mere sustenance, Lane greedily accepts.

Taking the driver’s seat, Lane speeds through the abandoned landscape and is distracted by a roadside mannequin bearing a sign that reads, “Organic Vegetables.” As she veers off the road, the car overturns and lands a dramatic wreck. Lane pulls herself from the car and walks away, without even checking if Christina is dead or alive. Making use of Christina’s “skin,” Lane visits Colin’s house and meets Angela, his androgynous teenage daughter (Caitlin Bossley). “So what do you do around here for entertainment?” asks Lane flirtatiously. Mistaking her for Christina, Angela is immediately drawn to Lane and takes her to a touristy geothermal hot spot where volcanic geysers shoot steam, the land bubbles mud, and acrid sulfur fills the air.

Angela tells Lane how the geysers used to be much bigger. “This country’s obsessed with size,” retorts Lane sarcastically. The experience of being dominated or crushed by an Other informs the film’s thematic backdrop. Angela is wearing a cap with a NY Yankees logo when she first meets Lane, evidence that she is already touched by an “American” influence. For her, Lane is an “exotic other” whose sexual power is both alluring and dangerous. When Lane seduces Colin, Angela again feels marginalized, and declares her former friend a “fatherfucker.” Befriending a broken, “crushed,” and slowly recovering Christina out of spite, Angela uses every opportunity to show her Lane’s betrayal.

In a 1993 interview featured on the DVD, Maclean states that insecurities about size are particular to New Zealand. “The effect of American culture,” says Maclean, “can be dominating and you tend to get this push-pull thing that happens where people either are overawed by it or have this reaction where they hate all things American.” Lurking beneath the surface are these familiar postcolonial anxieties about size and insecurity. Ironically, the ejaculating New Zealand landscape suggests another sort of potency.