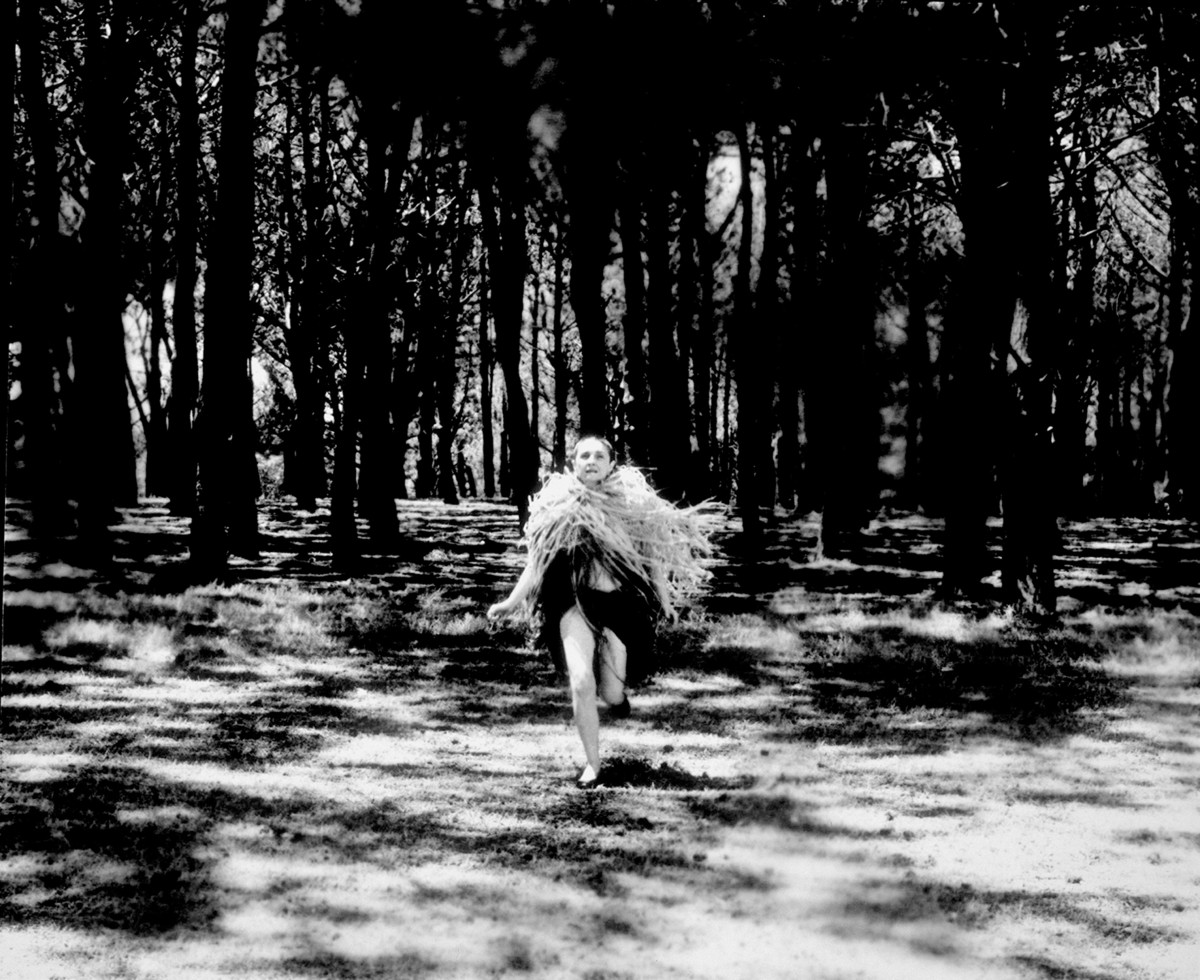 Cherine Fahd, A Woman Runs, Ashley, 2003
Courtesy of the artist

The sensuality of behind-the-scenes power: the art of making the other disappear. That requires an entire ritual.
— Jean Baudrillard

Women run in an ominous woodland setting. Their partial nudity is concealed by grass skirts that pad their elfin forms with mythic inference. Interiority is made flesh as the weight of the crushing world recedes from view. Cherine Fahd’s dreamlike series A Woman Runs (2003) conveys an affective process of release in motion. These enigmatic photographs, a key element of Fahd’s early oeuvre, invoke private rituals of ecdysis through a feminist recasting of avant-garde performance and spirit photography.

Though it is used in scientific and zoological contexts to explain a process of growth through the shedding of skin for a reptile, ecdysis could just as easily apply to a significant act of creative transformation. The genesis of Cherine Fahd’s Ecdysis (2019-21) dates to 2018 when the artist, then in her mid-forties and feeling very much like she had hit a mid-life/mid-career impasse, dreamed up a proposal for a new project. It began: ‘Ecdysis is born from a human desire for change, for reinvention, and a total rethink of the creative possibilities available artistically at this defining mid-career moment. I can continue as I always have, or I can “shed my skin” and reinvent what the next twenty years may look like.’

An artist’s career is like a slow boiling pot for a frog. Lifespans resist measure when an end is unknown, and yet, somehow, a mid-career awakening can come like an existential jolt against the ever-warming waters of comfort and convenience. Becoming mid-career is to be certified with maturity and achievement at the same time it points to age as a creeping barometer of obsolescence – especially when gender is thrown into the mix. Myths of male genius are bolstered with age. Conversely, invisibility is a cloak bestowed by the clock for women and gender diverse minorities.

Cherine Fahd, A Proxy for a Thousand Eyes performing with Daniel Mudie Cunningham, 2020
Courtesy of the artist

Having established a track record as a photographer whose work consistently challenges dominant perceptions of portraiture, Fahd’s vision of ecdysis was one that saw her expand her practice in a move towards live performance, as seen in A Proxy for a Thousand Eyes (performed at the Sydney Opera House in 2020). Ephemeral actions transcend quotidian life in Fahd’s photogenic world and act as a place where she can hide in plain sight.

Since her series Hiding (2009-10), Fahd has been secreting herself within familial tableaux of her own staging. Over 100 consecutive days, Fahd toyed with self-portraiture by concealing her face with various items found around the house as she went about domestic and maternal labour. Sheets, shirts, towels, and other fabrics turn into veils that make her both a saint and ghost in her own home.

During art school, Fahd majored in painting and dabbled with sculpture. This helps explain how she mediates the human body as a classical monument with abounding references to art history. Two bodies of works made concurrently, Plinth Piece (2014) and Shadowing Portraits (2014-16), incorporate the formal staging device of the white plinth to treat the body as figurative sculpture. For Plinth Piece she playfully posed for the camera, only to disguise her form with the application of children’s modelling dough to prints that were then rephotographed for a series of prints. The black putty applied to one of these prints, shadow study, obliterates her body as self and shadow merge into a single fleshy form – a body double for the void.

Fahd silhouettes others for Shadowing Portraits, a series depicting reputable Australian artists and curators with a known relationship to photography and for many – like myself – to the artist. Fahd inserts herself into the scene, lurking behind each subject as they pose, her mimicry visible through an uncanny doubling of limbs. The curvature of each body expands as Fahd’s barely hidden form penetrates their space. By shadowing the other, Fahd gives her subjects a double life or parallel reality that is controlled from behind and in front of the camera.

Created during a residency at the Clothing Store Artist Studios at Carriageworks over 2019-20, Ecdysis inherits the formal logic of the Shadowing Portraits. Forty-four female identifying subjects were invited to participate. They include family, friends, and artworld peers alongside several strangers who responded to a call out on Instagram. In the attention economy of social media, shadowing is now enacted digitally by ‘followers’ online.

Culturally and generationally diverse, each participant for Ecdysis is seated facing the camera. In a wink to the grass skirt of A Woman Runs, each is given a blue jacket to wear over their black attire. Discretely, Fahd takes a seat behind each woman, hidden from view. As in the Shadowing Portraits, her form conjoins with her subjects. At first like a hug, she reaches around their bodies and a doubling of arms recalls that of a Hindu goddess. In the ensuing three-minute action, Fahd attempts to disrobe her subjects. Instructed to face the camera, gazing directly at the lens, their intense stillness is ruptured by the tussle of two bodies waging a silent war.

Performed before the COVID-19 pandemic, Ecdysis commenced as a metaphor for psychic transformation at the service of touch. A process of shedding manifests as a trust exercise, untapping a reservoir of affect. Fahd fashions public intimacy for the camera as a choreography of soft power. Each woman responded differently by revealing personal pain: ‘I should warn you, I haven’t been touched for a very long time,’ disclosed one. Others entrusted Fahd with accounts of love and loyalty, loneliness and loss. Wordlessly, the residue of their experience is emotively framed by a shared ritual of shedding.

Presented for Liveworks Festival of Experimental Art as a large-scale three-channel video installation, each portrait becomes deific at scale. Initially, Ecdysis incorporated a live performance component. Fahd had planned a nightly ritual of ‘public intimacy’ performed with strangers wherein the shedding action would be repeated as a live event within the installation of video portraits. It became clear ahead of the festival that the performance element, based as it was on human touch, could not proceed.

At a time when so much creative labour is suspended along with our ability to gather as a community, it is necessary to acknowledge the spark of liveness intended for this project as it enters the archive. Forming out of the current moment is a storehouse of knowledge built on sensory contact and the consequences of its deficits. Ecdysis shows that with necessary renewal comes great connection. What good is having skin if it can’t be touched and touch others?

Published by Carriageworks in 2022.