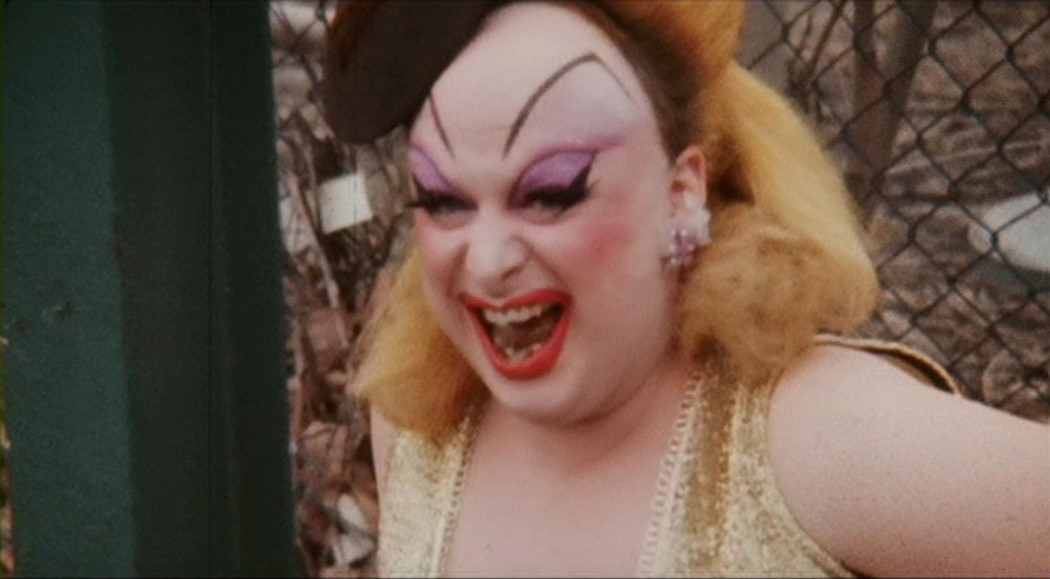 ‘‘Oh my God, someone has sent me a bowel movement.” shrieks Divine in John Waters’ Pink Flamingos (1972). The abject horror of being sent shit in the mail takes place in a film that celebrates filth.

If taken out of context. Divine’s words allegorise censorship, because she does not appreciate what she is viewing, but it still must be named. Whenever something is censored, its content is categorised as offensive through a process of clearly stating what is deemed unacceptable. It is paradoxical that a censored object must first be discussed in specific detail.

Like Pink Flamingos, Pier Paolo Pasolini’s Salò, or the 120 Days of Sodom (1975) also represent scatological themes. In both films shit symbolises the connection between the body and waste. ln Salò human beings are forced to eat shit within a fascist narrative of power and exploitation.

Similarly, Pink Flamingos features poor white trash as a metaphor for human excrement. A later film by John Waters, Desperate Living (1977) also uses this metaphor, but without specific depictions of shit. Instead, the outcasts of respectable Baltimore are exiled to their own colony of filth. Like Salò, a narrative of fascism is played out in Desperate Living through the bourgeois exploitation of human ‘filth’.

The representation of shit in Salò is one of the many reasons why it was recently banned for a second time by the Sydney based Classification Review Board. Pink Flamingos was also censored on its February re-release, a number of significant scenes being cut. How is it that “high impact” scenes like these have now sparked the concern of “reasonable adults”, when the films were first released in the 1970s?

Salò was completed just before Pasolini was brutally murdered by a male prostitute. The narrative revolves around four powerful archetypes of late-Italian fascism who exploit a group of teenagers by subjecting them to cruelty, degradation, fetishism and death.

To quote Pasolini. “In sadism and power politics human beings become objects. That similarity is the ideological basis for the film”. Structurally based on the Marquis de Sade’s The 120 Days of Sodom, Salò recontextualises this 18th century novel of libertine proportions into the modernity of 20th century fascism. Pasolini’s work consistently critiques the role that power plays in human relationships. It is ironic that Pasolini’s extreme vision of power relations should remain closeted and controlled by the mechanisms of censorship. After its release in 1975 Salò was banned in Australia until 1993 when it enjoyed an arthouse run of several years. Then Salò disappeared, only to face another recently revised ban.

A seven-page report has finally been published, explaining that Salò contains actors who may have been under 16, because at times they wore school uniforms that emphasised their youth. Though this was not reason enough to ban the film it did become an important factor for their overall decision.

It seems odd that 23 years after its release, this is of important consideration. Assuming they were under 16, did Pasolini’s actors face those horrors just because they agreed to represent them? Assuming they were over 16, Pasolini still had to make sure they looked youthful. If Aaron Spelling can pass off a 25-year-old actor as a high school student anybody can!

The Review Board could not sit on the issue of age alone, because it is too nebulous to determine. However, they could agree that Salò is offensive to “reasonable adults” through its “scenes of offensive cruelty with ‘high impact” and “scenes of sexual violence, sexual activity accompanied by offensive fetishes”.

To illustrate its point the Review Board went to great lengths to describe what is meant by their (self-arousing?) categories of filth. The perversions are listed rather than contextualised and indexed by the exact time they occur in Salò. Who could forget that a “girl is forced to crawl across the floor and eat faeces” at 63 minutes, or the girl at 77 minutes who is “forced to urinate on face and into mouth”.

These incidents are listed among 16 other scenes of “high impact” fetishism and cruelty. If Salò was available on video outside of the black market, those “reasonable adults” interested in these isolated acts can delight in the shortcut.

Restricted material like Salò does not necessarily censor the sins it deems offensive. Instead, the material is reinstated without context. In Excitable Speech (1997). Judith Butler writes: “Censorship precedes ‘speech’ and other cultural expressions and is in some sense responsible for its production”. 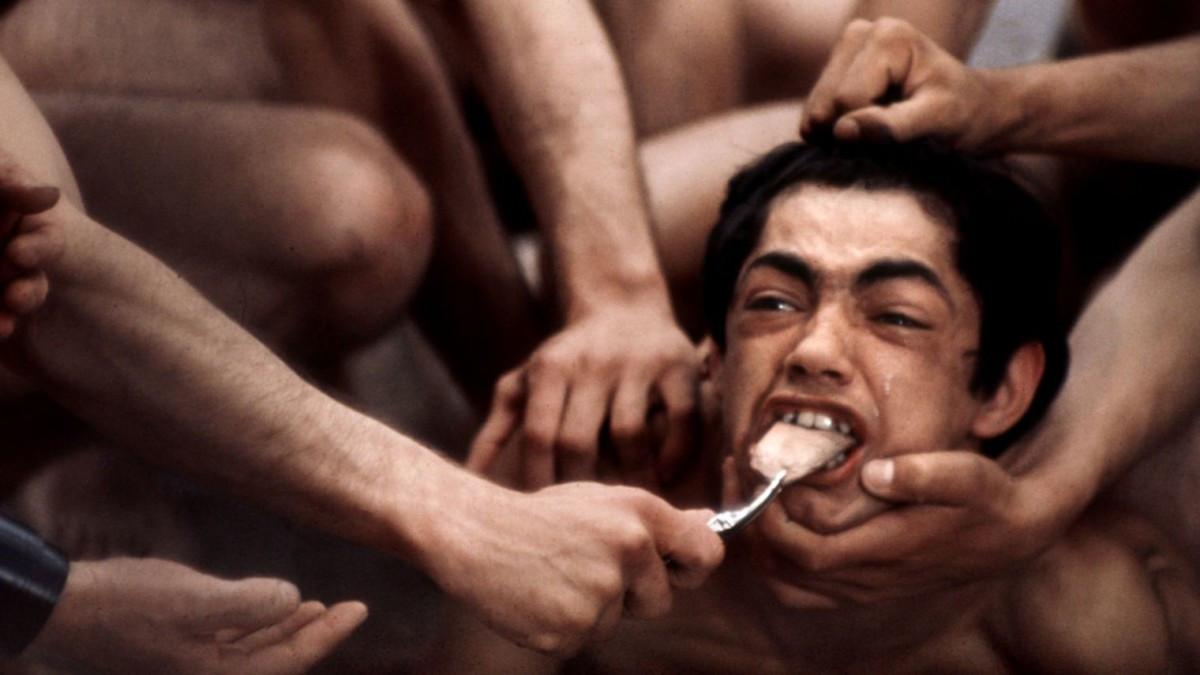 In a Rolling Stone interview with Pasolini, Gideon Bachmann describes Salò as the first film to represent scatological themes so vividly. The most recurring perversion in Salò is indeed shit. Between 71-73 minutes “all the dining room are forced to eat faeces as a meal”. This in itself provides a clue as to why Salò elicits such “high impact” viewer response.

Regardless of Bachmann’s omission, cinematic shit dates back to 1972 when John Waters unleashed his trash manifesto Pink Flamingos. “Like a septic tank explosion, it has to be seen to be believed,” was one critic’s response.

Starring the quintessential Divine, Pink Flamingos tells the story of Babs Johnson, a woman hell bent on retaining her family’s status as “the filthiest people alive”. In a climactic moment of filth, Babs eats a fresh dog turd. The cult success of Pink Flamingos is always attributed to this famous scene, probably because “reasonable adults” might find humour here.

In 1997 Pink Flamingos celebrated its 25th birthday with a restored print and soundtrack. The film was finally released this year [1998] for a limited run – a little late for the birthday party. In this instance, the film was not banned, but screened with abrasive cuts.

In Shock Value (1981), Waters writes: “Not only did the chicken get ‘fucked’, so to speak, it also got famous in a movie to boot. We actually made the chicken’s life better”. Why then, censor a famous chicken – that will only make it all the more legendary!

One thing is certain, both Pasolini and Waters resort to extreme measures of degradation to create very different aesthetics. Pasolini’s take on modernity is bleak and depressing, while Waters is camp and satirical. In Desperate Living, Waters creates his own fascist fairytale about Mortville “a town that ain’t got much pity’”.

Mortville is a town of terrorists, outcasts and criminals who are governed by Queen Carlotta (Edith Massey), a monarch whose servants are submissive gay leather clones. An anti-hero narrative, Desperate Living blurs the distinction between filth and fetish, making the film a work of unprecedented trash art.

The camp excess of Desperate Living could not possibly offend a reasonable adult in the same way as the prolonged sadism of Salò. Divine’s taste for shit is not censored from Pink Flamingos, but the shit-eating of Salò is considered to be a punishable fetish.

What then is a “reasonable adult”? Because if it means prohibiting valuable chunks of queer cinema, I would not want to be one. 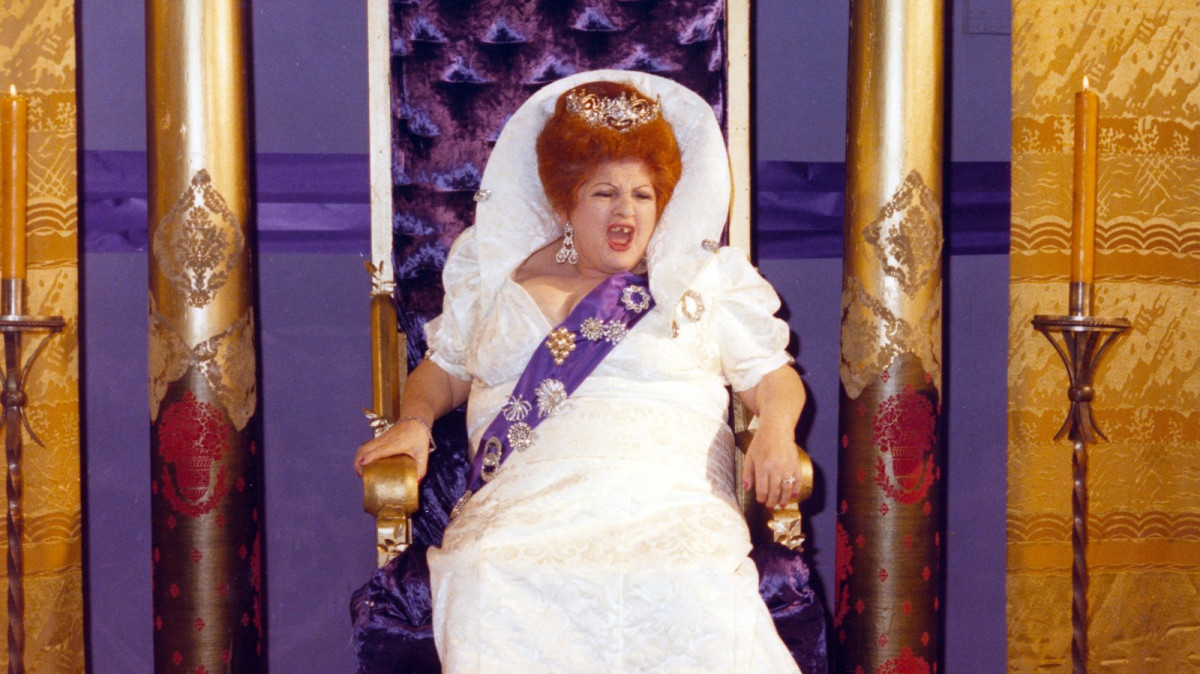 Polemical essay on scatology in cult cinema and film censorship in Australia.