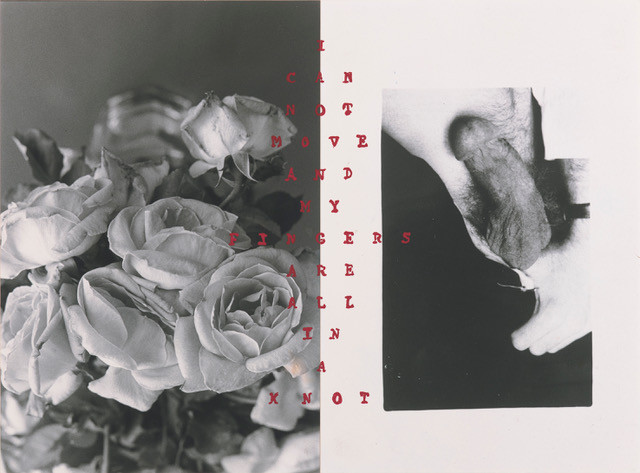 Peter Maloney, Is this the way to Round-the-World? 1998

Two weeks after Mardi Gras climaxed some festival exhibitions linger, but it is the Australian Centre for Photography’s offering that provides more than just a recovery drug for the throbbing post-party hangover. Peter Maloney and art2go venture into the gay male psyche with exhibitions that are diametrically opposed in tone and mood but maintain a surface level of queer celebration that, when uncovered, is beset with loss and decay.

The world is flat for Peter Maloney. Is this the way to Round-the-World? is an exhibition that flattens all traces of personal history into a series of photomontages. It is the intensely layered exchange between the series of 26 paired images and their superimposed texts that makes them jump out of their frames with a vivid spatiality.

A sense of narrative sets these works in motion, however fractured and diseased it may be. Reading is required, but to read these images is to blow them out of all proportion. Dorian Corey, legendary diva from Paris is Burning, describes reading as a process of violation: once “you’ve found a flaw and exaggerated it, then you’ve got a good read going”. The same can be said of Maloney’s images. To read them is to twist and amplify their power and sting – unease and disease.

Ladies come in dreams introduces drag. The queen is dead on a tiled floor; a piece of prose stamped on the image like an epitaph spelling out the context for her death by drag. This melodramatic “homocide” is powerful and maintains a black humour, without being overtly celebratory (as would be expected for a Mardi Gras exhibition). It is worth noting that this wonderfully ascetic exhibition is chaperoned by Bruce James’ catalogue essay which in itself reads like piece of art.

Presenting in a festival promoting a 20 year (r)evolution of sexual identity, art2go slip into anachronistic excess. While Maloney unveils the narrative of a private paradise lost and regained, art2go remix the 70s aesthetic with no clear sense of transgression or subversion. Reminded of the faulty mirror ball crushing unsuspecting revellers at a dance party in recent times – this offers more shock or vertigo than what art2go offers.

Review of Peter Maloney's Is this the way to Round-the-World? and art2go's Vertigo at Australian Centre for Photography, Sydney, 20 February - 21 March 1998.