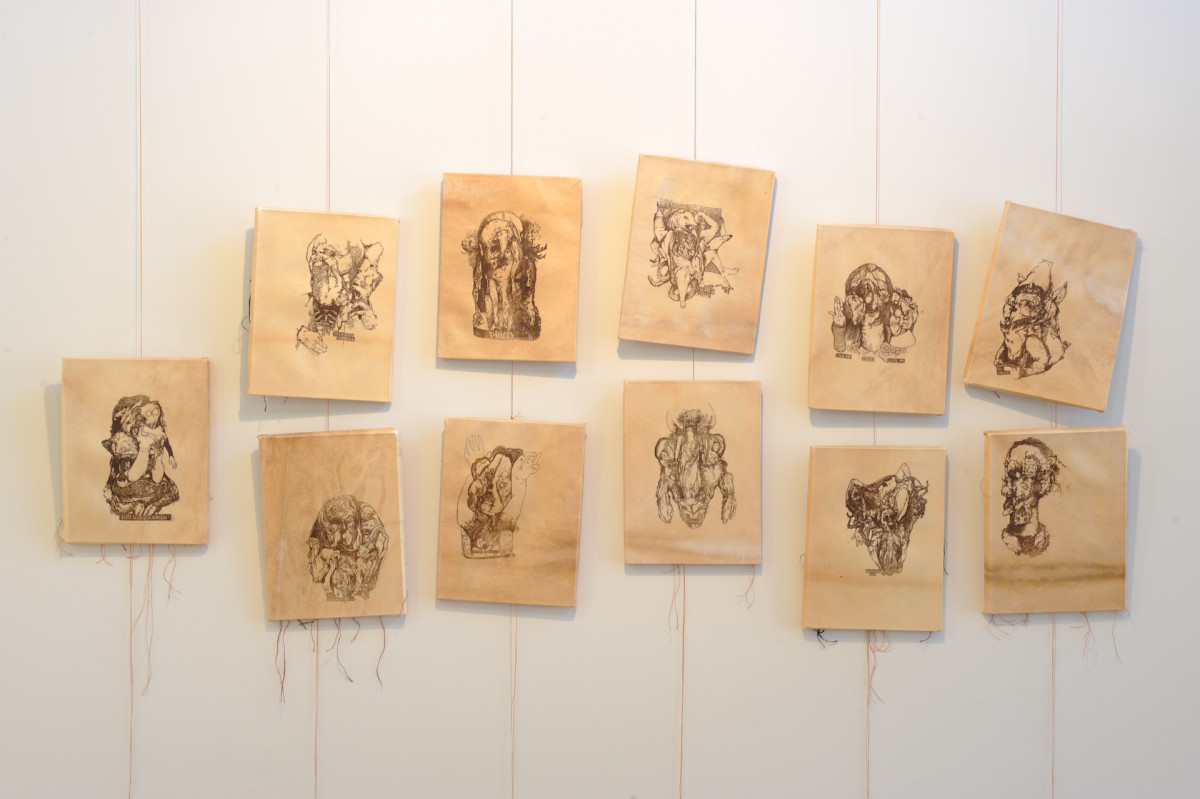 “For the sake of simplicity I have always characterised my work as being about deformity,” Drew Bickford tells me over a beer. Looking at his work, I understand why he needs a tidy descriptive word to sum it all up. The attention to complex detail is almost overwhelming and I can imagine it either drawing in or repelling a viewer. Drew’s emphasis on bodily abjection doesn’t necessarily come from a “political correctness trip” to find the heart of gold in all things deformed. Rather, Drew is interested in how “social and moral deformity manifests itself in a physical way.” Since he can remember, he’s been attracted to horror films, serial killers, true crime and surrealism. Mashing narratives of real life violence with the almost canny excesses of B-grade gore, Drew plays surrealist mind games by depicting imagined, unconscious and primal urges with ink on paper.

Spawned primarily from pop culture, Drew’s interest in the dark side has always been at odds with his fondness for apple pie sentimentality. “I’ve always had a guilty love of The Brady Bunch and The Partridge Family as a kid and probably more now since the miracle of DVD.” When I ask him if his childhood was more Brady Bunch or Texas Chainsaw Massacre, he confesses, “Dad read us stories from Reader’s Digest and the only one that ever stuck in my mind was about the real-life murder of six-year-old Robbie Wayne. His parents pulled his teeth out with strings tied to a doorknob, put battery acid on his hands and then threw him in the bin when he was dead. That was bed-time reading at my place, and probably a form of child abuse now that I think about it, but my siblings and I were absolutely riveted by it.” Brady Bunch on LSD perhaps.

Igniting a passion for nightmarish imagery, the Robbie Wayne story drew Drew towards horror films and true crime books. By about the age of nine, he started drawing splatter and gore. “I never questioned my interest in horrific imagery until I was sent to the school counsellor for always drawing monsters and serial killers. It seemed from that day on I had to justify my art. When the kind of violence we’re daily confronted by in the media is celebrated in art, there’s a tendency to dismiss it as dysfunction or something. I’m really just responding to the landscape of violence our culture willingly perpetuates.”

By the time he got to art school at the University of Western Sydney, you’d think the whole violence aesthetic would have found a happy home. Well, it did until he made Penny Dreadful, a nasty little video installation, as part of his graduating exhibition in 2002. Fusing clunky puppet animation techniques with a low-fi, dollhouse aesthetic, Penny Dreadful is the story of a teenager who runs away from her abusive home and becomes a serial-killing lesbian. Narrated like an episode of Play School, Penny Dreadful nearly didn’t get shown. “They had to post a warning on work because of its graphic content. Just before the grad show, a pornographic work made by a student was seized by the police, and so they figured Penny was some form of puppet porn.” When I ask for some elaboration, Drew says, “Well, there were scenes depicting lesbian S&M, incest, teenage crack-whores, and a touch of voodoo.” Inspired by serial killer Aileen Wuornos, Drew imagined that her life story could have derived from a “Penny Dreadful” — a pulpy literary genre once popular because readers could get their morbid thrills for the cost of a mere penny.

Turning true crime into fictional worlds is a recurring theme in Drew’s work. His most recent series is called The Speckled Hen, a twisted homage to Katherine Knight, a grandmother and abattoir worker from Muswellbrook, who stabbed, skinned and cooked her lover in 2000. “Admittedly, it was the spectacular nature of the crime that interested me at first, but also the low profile it received in the media. Most people I spoke to knew nothing of it.” The abstract illustrations offer fractured glimpses of the crime itself while the text provides a loose narrative.

Drew only started employing text in 2004 when he began the ongoing series Period. Captioned with oddly benign phrases that namedrop the likes of Johnny Depp and Happy Days, these monstrous figures are cartoonish amalgams of animal-vegetable-mineral-whatever. Each illustration in Period is loosely based around the random conversations of students overheard in his day job as a high school art teacher. Produced at school within the 50-minute time frame of one lesson or period, they are instinctive and organic with no structured plan in their design. “These works are done really quickly and only to amuse myself. I grew up reading MAD magazine and the wild caricatures by artists like Mort Drucker were a big influence on my style. The more exaggerated the better.”

The comic charm of Period deliberately hides a more sinister, uncanny quality. Associated mostly with horror, Sigmund Freud once wrote that the uncanny belonged to “that class of the terrifying which leads back to something long known to us, once very familiar.” Drew’s ability to make the familiar strange and vice versa is definitely a common denominator. “When I’m drawing I’m always looking for the creepy side of things, always trying to do something that’s unsettling and spooky, but that also hopefully taps into some fairly recognisable themes.” Period.