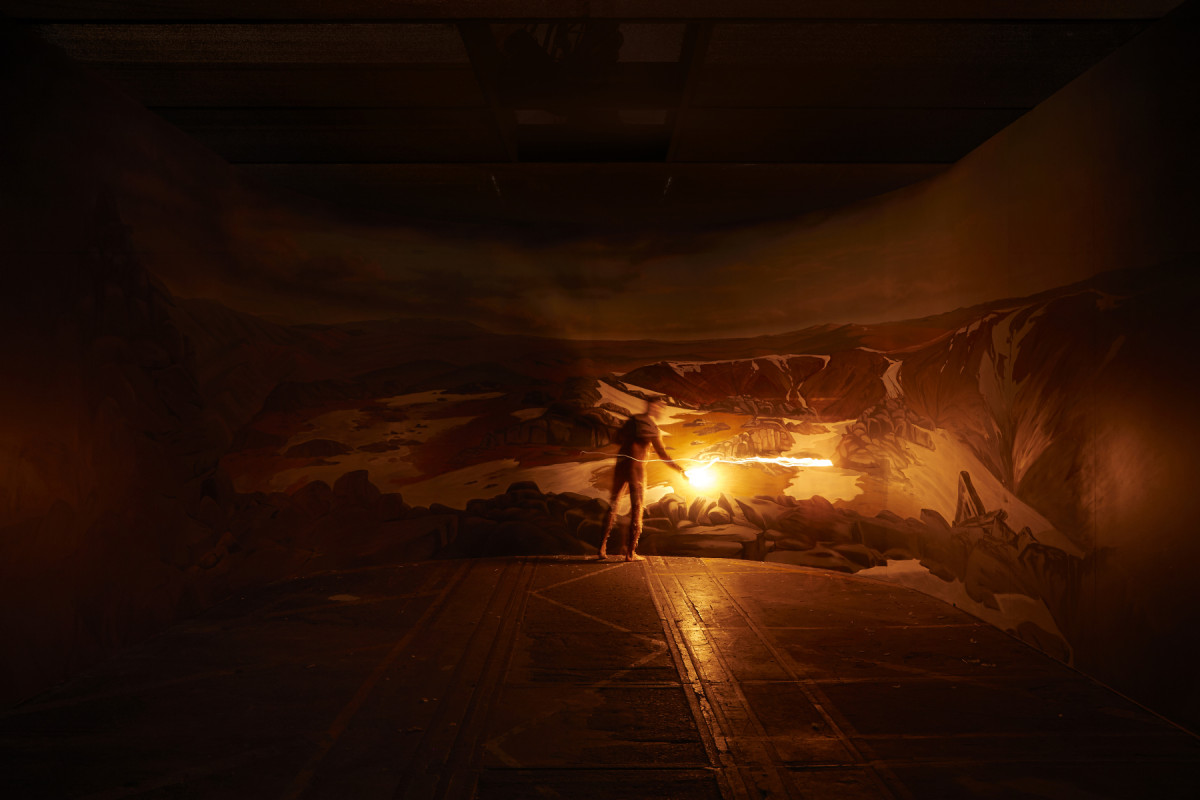 What I prefer, about postcards, is that one does not know what is in front or what is in back, here or there, near or far, the Plato or the Socrates, recto or verso. Nor what is the most important, the picture or the text, and in the text, the message or the caption, or the address.

Australia’s largest tourist attraction during the bicentenary ‘celebrations’ of European colonial settlement was World Expo 88 in Brisbane. It opened to the public on 30 April 1988, a week after Billy Ocean’s Get Outta My Dreams, Get Into My Car bumped Kylie Minogue’s I Should Be So Lucky from the top spot on the Australian Top 40. It is probable that Kylie’s song was a staple on the AM radio airwaves as you crossed the Expo threshold, through the colossal AUSTRALIA sign that Ken Done had designed for the entrance. Given Australia’s reputation as the Lucky Country, thanks to Donald Horne’s famous 1964 book, Kylie’s hit may as well have been the unofficial postmodern national anthem, as bicentenary fever shook postcolonial Australia.

Is there an Australian art equivalent of a chart-topping song? No, so let’s settle on what was on the cover of Art & Australia as Expo 88 opened. The Autumn 1988 edition of the perennial journal featured Eugene von Guérard’s Mt William from Mt Dryden, Victoria (1857). The words ‘Australia 1788–1988’ appeared in small print adjacent to the masthead. Among its pages, predominately surveying white male artists with zero Indigenous representation, was artist Brian Blanchflower’s personal written response to von Guérard’s anachronistic colonial landscape.

Eugene von Guérard (1811–1901) died a couple of years after the decade-and-a-half it took to build the Eveleigh Railway Workshops, now known as Carriageworks. What do von Guérard and Carriageworks have in common? Nothing, unless you consider how their respective bonds to unspoiled nature and the architectural residue of an industrial past are frequently described as ‘sublime’ and ‘picturesque’. (Coincidentally, von Guérard’s cover appearance on Art & Australia occurred at exactly the same time that the Eveleigh Railway Workshops ceased operating with steam-powered industry in 1988.)

A month before The National 2019: New Australian Art opens, I turn 44 years of age. Back at the scene of my birth in February 1975, the number one song on the Australian Top 40 was Please Mr Postman by The Carpenters. ‘I remember it used to play when I was in the hospital,’ commented my mother when I posted the music video on Facebook the day I started writing this essay. In the clip, infantilised adult siblings Karen and Richard Carpenter spend a sunny day frolicking in Disneyland with Mickey Mouse, Donald Duck and Goofy. Music clip meets tourism travelogue, the three-minute song is a postcard from mid-1970s upper-middle-class-late-capitalist-white-heteronormativity; a stark contrast from the track’s Motown origins.

I haven’t sent a postcard in a long time, but I frequently post found visual matter on social media. In my view, this gesture is one and the same – a kind of fleeting, fragmented and non-linear pop-cultural tourism for the algorithmic feed of our time(line)s. Characterised by brevity and inexpensiveness, a printed postcard does a similar thing, in that it reduces our experience of consumption down to its very basics, a snapshot of the here and now summed up by a swift sentence, or three: Thinking of you! Having a great time! Wish you were here!

Owing to its intimacy, and despite a tension between its mass reproduction and subsequent personalisation, the postcard and other souvenirs of travel become a mnemonic device with which to remember otherwise fleeting experiences. Of the impulse to document tourism and travel, urban planning theorist Linda C. Samuels writes:

To gaze upon the uncommon or the extraordinary and to institutionalise this gaze by capturing and saving it, converts the temporariness of the trip into the permanent memory palaces of souvenirs, photographs and postcards.

This permanency shifts meaning over time as these artefacts circulate in the secondary-market hereafter, where images are abandoned, awaiting new adaptive uses. Tony Albert’s orphaned (stolen) relics of ‘Aboriginalia’, for instance, are kitsch mid-century depictions of First Nations people that he collects and redacts for The National as a minimalist black-and-white house of cards set to topple at any moment.

The logic and expectation for The National: New Australian Art exhibition series is evoked in its title. Artists are selected from across ‘the nation’ to form a sample of contemporary practice (artists competing at ‘the nationals’, if we applied a competitive sport metaphor). In curating this 2019 edition at Carriageworks, time and again I contemplated the idea and form of the postcard as I was meeting artists in their studios across the country. Images encountered on my travels became postcards of a time and place that I imagined mailing to a future version of myself. Receiving a postcard is a joyous digression that punctures the otherwise humdrum routine and schedule of daily life. When Sean Rafferty mailed me one from Port Douglas in tropical Far North Queensland during a field trip where he met farmers and collected their fruit cartons and stories, it dawned on me that his ongoing Cartonography project is itself a friendly postcard from the regions: sunshine for dark times.

Employing the postcard as a metaphor of memory and digression, what has been delivered at Carriageworks for The National 2019 navigates the present moment, through the past, for the future. The exhibition maps memory and placemaking, where the work of art is an unsealed letter teeming with postmarked messages for an unspecified reader – the emotional tourists among us who feast on another’s experience to quench an otherwise aching emptiness. A fundamentally public message, a postcard assumes an intended reader and speaks to this person as if they are the only possible recipient. The addressed stress on destination circumvents unplanned interceptions en route – new meanings from new audiences – dotted along the way. Exploring the slippery edges of truth and fiction, the artists presented at Carriageworks reflect on the individual’s place in a precarious and ever-shifting world, sending their work into the world like postcards mailed from the visual wreckage of local, national or global contexts.

Following the 30-year anniversary of World Expo 88, Ken Done’s AUSTRALIA is updated by Sam Cranstoun’s Utopia (2019). Publicly situated outside Carriageworks at the exhibition entrance, the word UTOPIA reads like a warm welcome, promising optimism through its sunny Done-inspired letterforms and thinly disguising the dark dystopic flipside to come. Roland Barthes writes, ‘the mark of utopia is the everyday; or even: everything everyday is utopian’. (5) Much earlier in the 20th century, during the industrial heyday of the Eveleigh Railway Workshops, an everyday sight would have been locomotive steam. Tom Múller responds directly to this history with Ghost Line (2019), a site-specific installation using fog as sculptural matter that animates the Carriageworks precinct with a spectral trace of its past use. Thom Roberts similarly engages with the rail culture of the site through his personified train portraits installed as banners within the massive signage structure at the Wilson Street entrance to Carriageworks.

Stepping inside the building, the foyer of Bay 21 at Carriageworks presents a video installation by Nat Thomas that reframes Hollywood cinema from the late 20th century. Thomas’ Postcards from the Edge (2019) invites audiences to lie on a platform to simulate a scene from the 1990 film of the same name. You too can be Meryl Streep’s approximation of Carrie Fisher hanging on for grim death from a tall building. For Thomas, fear can be an illusion, a carefully staged and hashtagged photo-op for social media. Our catastrophised lives are often better off than we realise – especially if it means risking life for a viral and fame-making picture. In contrast, Tara Marynowsky’s Coming Attractions (2017–19) ‘defaces’ the female protagonists in film trailers for Pretty Woman (1990), Indecent Proposal (1993), Species (1995) and Shakespeare in Love (1998) by violently scratching into the surface of each frame of celluloid to create a humorous feminist response to the snowballing backdrop of the Harvey Weinstein takedown.

Long before social media, music videos were a key access point to how stardom could be engineered through image and persona. In the video installation OH YEAH TONIGHT (2019) Melanie Jame Wolf takes aim at these three most repeated words in pop music: ‘oh’, ‘yeah’, ‘tonight’. Packed into three-minute pop songs, these words are either complex mantras or complete reductions of how sexuality and power come to shape an understanding of the world, particularly one formed in youth. Reared in the eighties MTV era, Wolf creates seductively queer- feminist deconstructions of image and text to dramaturgical effect.

Text is central to Troy-Anthony Baylis’ series Postcards (2010–). Baylis repurposes metallic Glomesh handbags and purses from second-hand stores into works that spell out placenames while visually referencing Aboriginal breastplates. Offering armour through a set of cultural conditions specific to his Papua New Guinean lineage, Eric Bridgeman’s shields meld the traditional designs of his homeland with a visual language drawn from sport and art. Bridgeman’s shields are a communal enterprise, made with family and friends, a private language between kin transformed as contemporary abstraction when it meets the gallery wall. The process of making for Baylis, in contrast, is an intense and laborious stitching of camp fabric into an implied correspondence between the drag queens and ‘sistagirls’ and the locations they are either named after or reside at.

Drag has long been central to the work of Luke Roberts. 2019 marks the 40th anniversary of his most enduring ‘performance guide’, Her Divine Holiness Pope Alice, who first appeared publicly at the Swish Ball, a party event held in suburban Brisbane in 1979. Roberts celebrates Pope Alice’s birthday with a performance at both Carriageworks and the Art Gallery of New South Wales on the opening weekend of The National 2019. In the exhibition, Roberts presents a new photographic work, Mars Rusting (2018), which reimagines and contemporises baroque painter Diego Velázquez’s Mars Resting (c.1638).

Whether high or low, personal or political, old or new, the process of mining diverse visual archives is a common denominator. Sensitive to the ontological relationship of photography to death, Cherine Fahd privately mourns a grandfather she never knew through a form of public empathy by responding to family photos that document his funeral at Rookwood Cemetery in 1975. Julie Fragar’s speculative and symbolic self-portrait imagines the unknown future event of her death in paint, to potentially decouple fear and mortality. For Clare Peake, it is a reverence for dead objects that sees her failed attempts at making in the studio become a shamanic coat of many colours.

As the exhibition advances further to the back of Bay 21, the archive breaks down and compacts into the landscape. Amala Groom navigates a forest of gum trees near her home on Wiradjuri land through a video performance that unites marriage ritual and spiritual rite as a decolonising gesture. The Crocker Land Expedition (2018) is Mish Meijers and Tricky Walsh’s re-creation of the 1913 voyage of the same name, which involved a search for land in the Arctic Circle that turned out to be a mirage. Populated by an army of disembodied limbs, Meijers and Walsh build a desert island scattered with remnants of disaster. In the space directly adjacent, a Tower of Babel composed of household domestic objects and whitegoods is assembled and destroyed by Eugenia Raskopoulos. Opposite her video projection is a suspended red neon sculpture that swings back and forth like a pendulum of doom, an edict of (dis)order.

Concluding this trip, like a strange revisioning of Plato’s Cave, Mark Shorter endorses the proposition that Eugene von Guérard and Carriageworks have something in common, strange bedfellows though they may be. Panoramic and romantic, von Guérard interpreted the Australian terrain as peculiar and otherworldly, capturing antipodean space firmly within a European lens. Adopting an outlandish performance alter ego called Schleimgurgeln – a self-professed time-travelling landscape-painting critic, naked and feathered, with boiled eggs for eyes – Song for von Guérard (2019) employs absurdist tactics to rethink the Viennese-born artist’s canonised work. On occasions, Shorter activates the space through performance, enlightening the landscape with a struck match.

Exit through the gift shop and get a postcard from dystopia.

Published by Carriageworks in 2019.