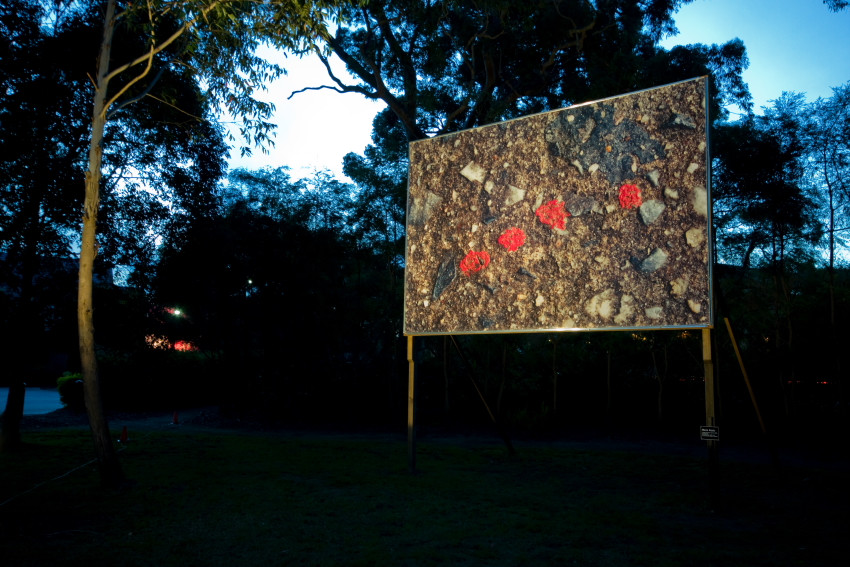 orama (ə ram′ə, ə rä′mə)
a greater-than-usual number, volume, or variety of a specified thing: used to form commercial names and other words for events and displays.

Maria Kozic’s photo series Collide-O-Rama depicts fragments of detritus found in urban settings. They are suggestive of things that spark a connection to a whole story, however elliptical and mysterious they may be as individual images. Kozic, who has been living and working in New York for the last decade, documents the discarded, overlooked and taken-for-granted; things that have an intended meaning until transformed into images, where their significance takes you into a whole other world.

Specially commissioned for the Hazelhurst garden billboard project, Collide-O-Rama constructs a story from images seen at different times and locations, but connected by their allusions to acts involving altercations of a violent and sexual nature. Viewers are encouraged to piece together a narrative from the four billboards so that, like a forensic examination at a crime scene, an emotionally charged story unfolds. Kozic confronts us with transient glimpses of life hidden away, seemingly unnoticed, awaiting extinction until discovered by the flash of her camera.

These traces of urban life, which might suggest peeling or decaying layers of a city in transition, were photographed in her New York neighbourhood. For Kozic, it is very hard to walk down any street without being affected by something: “Even when there doesn’t seem to be much there, there is”, she says. The almost imperceptible quality of these things speaks to Kozic’s desire to amplify the affective and mnemonic facets of a world understood through its materiality. Throughout the 1980s and early 1990s, Kozic made a series of DIY magazines (what we would now call ‘zines’) where her doodles, drawings, collages, photos and drawings would be lovingly compiled and photocopied to form theme based publications.

These mags were a way for the artist to connect up the barrage of images she describes as “festering inside” and which mutate over time by being constantly reworked. For instance Blue Boy – known to most as an inflatable icon mounted atop Sydney’s Museum of Contemporary Art in 1992 – had its genesis as a character from these early drawings. Says Kozic, “I see through Blue Boy’s eyes, yet he is the eyes of everyone”.

The photos in Collide-O-Rama are drawn from a personal archive stretching over her career as an artist, and similarly morph over time through their use across a variety of contexts and media. If Blue Boy sees what most of us never see – the ordinary rendered larger than life and extraordinary – then, Collide-O-Rama, comprises fragments from a much larger landscape of thoughts and emotional connections for the artist. “When I see things that spark certain emotions, it stays in my head because it has some sort of impact,” says Kozic. “I started taking photos of these moments to record what I was seeing at that particular time.”

The last time Kozic produced a public billboard in Australia was in 1990, when Maria Kozic is Bitch charged shockwaves of fear through male commuters everywhere. In this work Kozic’s critique of how women’s bodies are fetishistically offered up for male-driven mass consumption calls to mind her interest in exploitation movies. You can’t help but wonder if Kozic starred in her own Bitch-O-Rama movie at the time. The application of the suffix ‘o-rama’ to the word ‘collide’ – a popular linguistic trope in the title of exploitation movies like Striporama (1953) or Teaserama (1955) – reinforces the manner by which the diminutive quality of these objects smash together and are brought into tight focus through their cropping and enlargement onto billboards. Part crime story, part exploitation movie, Collide-O-Rama sensationalises the psychogeographic ruins of an urban environment forever waiting to explode into tears.

Published by Hazelhurst Art Gallery in 2009.