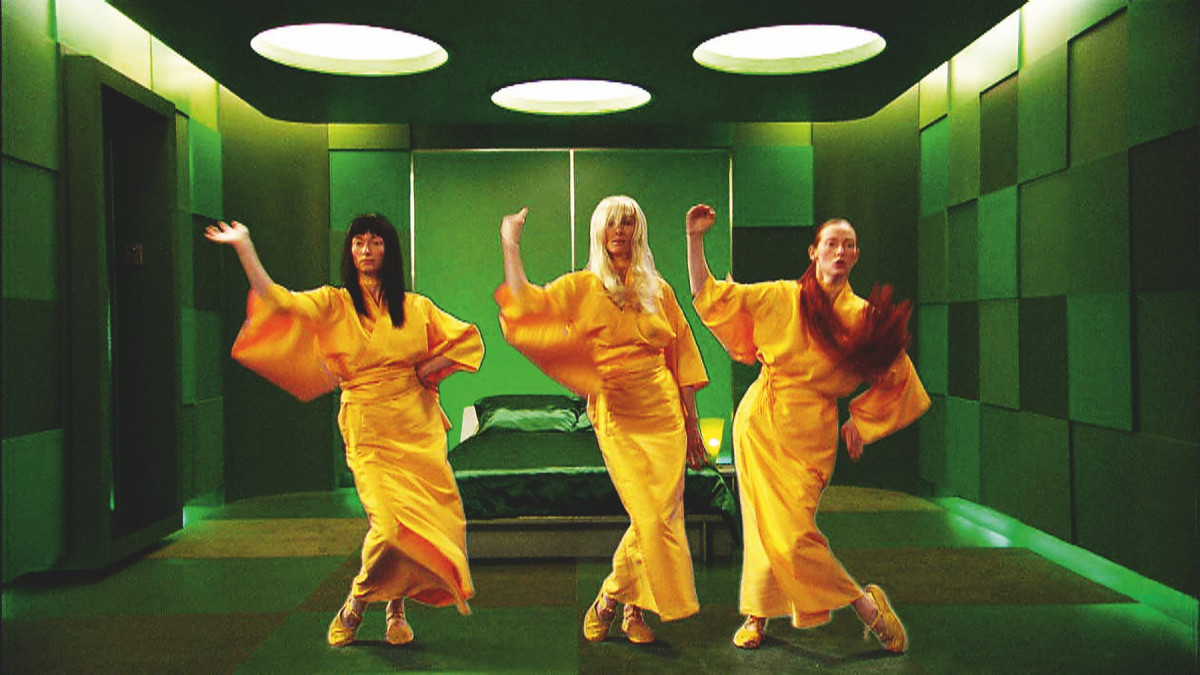 Teknolust, Lynn Hershman Leeson’s second feature, after Conceiving Ada (1997), stars Tilda Swinton as all three cum-drinking “Self-Replicating Automatons,” as well as their creator, scientist Dr. Rosetta Stone. Having downloaded her DNA into a virtual environment, Rosetta becomes both sister and mother to her color-coordinated, Yamamoto-clad clones. Obsessing over research outcomes that are really just fulfilling a narcissistic urge to replicate herself into clones, Rosetta, a virgin, is dependent on the “life force” of sperm for survival.

Lovingly communicating with her clones through the screen of her microwave oven, Rosetta reminds them that they must seek permission before entering into the real world, as her groundbreaking research is still shrouded in secrecy. Their primary connection with the world outside is a website called “The E-Dream Portal.” Ruby, the predatory condom-carrying ringleader hosts the site, inviting men to “emote from your remote.” Rosetta allows Ruby to escape the virtual realm at night, in order to pursue sexual encounters with men in the “real world” of San Francisco. Ruby bags their “spermatozoa,” using it to recharge their limited immune systems. A growing number of men fall prey to Ruby’s sexual allure, discovering later that the experience has left them impotent and marked with barcodes on their foreheads.

Rosetta’s university faculty gets wind of the situation, hiring Agent Hopper (James Urbaniak) and transgender Dirty Dick (Karen Black) to nip this “bio-gender warfare” in the bud. Rosetta forbids Ruby’s field trips, but her synthetic sperm substitute nearly kills one of them. And so, Ruby sneaks out to find bona fide bodily fluids on a regular basis. Mistaking glazed donuts for one possible repository, she tries to use her stash of condoms as currency. Entranced with her naïve beauty, a photocopy boy named Sandy (Jeremy Davies) gallantly pays her bill and invites her to share a moment over a pink donut. They seem a perfect match: one is a copy-maker, a virgin waiting for the right girl; the other is the other a copy, and a tramp. “Let’s never let the celebration end,” Ruby says to her new recurring cuddle.

Both Sandy and Rosetta suppress their libidos into desires to duplicate. They are also named to connect. Her name derives from the Rosetta Stone, an ancient artifact marked with cryptic hieroglyphics. (One of Rosetta’s clones delights in encrypting the English language, uttering illegible words that sound like they are spoken underwater; though it annoys Rosetta, her clone asserts an identity separate from the others, creating an unexpected twist on her initial programming.) Rosetta and Sandy’s names together recall the noted cyber-theorist Allucquére Rosanne (Sandy) Stone, Founding Director of the Advanced Communication Technologies Laboratory at the University of Texas. Making copies stands in for Rosetta’s displaced desire to connect sexually with another. And through Rosetta’s chief clone Ruby, Sandy loves something other than photocopies.

Having played numerous genderfuck creatures during her stunningly uncompromised career, Swinton is perfectly suited to Leeson’s cyberfeminist project. It’s no mean feat to imbue four related characters with their own personalities, and Swinton conveys a refreshing lightness, far removed from her collaborations with Derek Jarman or her star turn in Sally Potter’s Orlando (1992). At the same time, Karen Black camps it up as a jaded trans trickster, recalling the way she gave new meaning to the term homecoming queen in Robert Altman’s Come Back to the Five and Dime, Jimmy Dean, Jimmy Dean (1982).

Except for Black, the film, tagged a “chemical comedy,” has precious few amusing moments. The premise is wacky and the candy-coated visual style delicious. But its virtual theorizing makes the mood intellectually titillating rather than laugh-out-loud funny, even as an array of pop cultural references, from William Gibson to Björk, feels forced. Still, the production design cleverly incorporates visual puns. A painting of a rabbit insinuates the way cloning “breeds out” natural means of reproduction, while also indexing the way “nature” and “reality” are reconfigured through the virtual. The interiors are patterned in grid-like repetitions, suggesting the pixelated components of digital information. And while iMac product placement has become fairly commonplace in film and TV, at least in Teknolust their ubiquity is at home in the primary-colored spaces inhabited by Rosetta and her digital brood made flesh.

As much as its attractive facade demands a scopophilic response, Teknolust never gets beyond its own superficiality. The familiar spatial figuring of VR and cyberspace in new media jargon is drawn out in the way Rosetta’s clones move freely through virtual and “real world” spaces. But Teknolust fails to be immersed fully in the illusion of depth and space characteristic of VR and the Internet. But for a film so aware of its own debt to postmodern theory, an obsession with surface might just be the point.