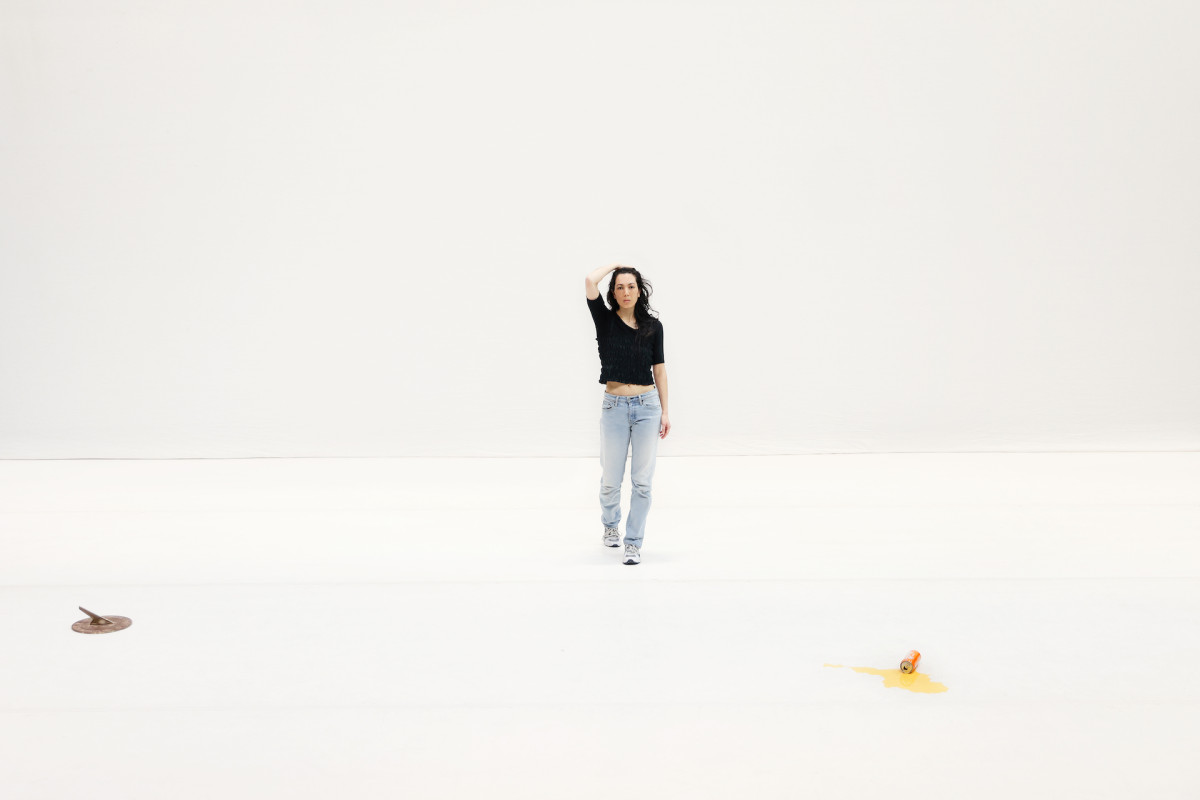 I am seated four rows from the stage on the opening night of Angela Goh’s Sky Blue Mythic, staring ahead at the stark white minimal set. Staying focussed and alert to the blinding white void is calming intermittent waves of anxiety now caused by being out in public, seeing a live show. Audience capacities are back at 100% and everyone appears pleased to be back in the theatre, despite the mixed messaging of social distancing and mandatory masks in a packed venue. Art workers and makers line the red seats of the intimate theatre anticipating Goh’s new hour-long work, developed from the 20-minute piece that won her the Keir Choreographic Award at Carriageworks on 14 March 2020.

Outside, Circular Quay is teeming with crowds for the lunar eclipse, angling to capture the best possible photo of the blood red supermoon with their fancy cameras and accessories. Destination NSW’s Vivid Sydney light and music festival would normally have been on at this time, but it has been moved to later in the year, fingers crossed. In its place, cosmic time is delivering the best event never staged to an audience of moths, drawn to the flame of the moon. Temporal public art at its best.

Angela Goh enters in ripped jeans and sneakers holding a can of what looks like Fanta. She glides slowly and effortlessly across the stage—slow motion personified. Falling to the floor as a dancer would, elegant and fussfree, the drink spills across the Tarkett stage, forming a pool of colour— loosely echoing the shape of a sundial artfully propped nearby. An accident has happened. And it will occur over and again, as her shadowless gnomon body becomes an instrument of power over the numinous forces binding space and time, measuring contingency against control.

That afternoon the moon rises at 4:46pm and the sun sets at 5:17pm. Earlier, at 1:30pm artist Lizzie Buckmaster Dove plans a gathering at the north end of Coledale Beach in the Illawarra on Dharawal Country, less than 20km from Wollongong. With a group of fourteen mostly female friends and acquaintances from her community, Buckmaster Dove will build a blood moon from red rocks, shooting the complete circle as the moon rises.

Everyone is instructed to wear red. Artist Lucas Ihlein is the only adult male figure among the women and two children. He wears a red puffer jacket; Buckmaster Dove sports a red boiler suit mailed from a friend in London; a Maori woman with a shock of long white hair dons a top hat and I think of Stevie Nicks singing Sisters of the Moon.

A performative form of temporal land art, Buckmaster Dove conceived the work intuitively, as talking to the tide: ‘The moon (and the sun)—the cosmic or celestial bodies—become anchors to the natural world in which the work is being constructed. At the Coledale sea pool, the moon dictates the tides and the tide breaks over the walls of the pool.’

The circadian rhythms intersecting the sun and moon with land and sea is elemental; an infinitely repeated 24-hour cycle cleaved from the immeasurable void of cosmic time. Within this rhythm, the supermoon breaches pandemic time—erupting in a small window on 26 May 2021 when we could gather in circles and perform the rituals we call art.