Mel O’Callaghan and I started talking about working together for this project in 2018. At one of our first meetings that year, Mel and I spent time in deep conversation while exploring the nooks and crannies of Carriageworks, along with the precinct at South Eveleigh, on the other side of the adjoining rail corridor. The South Eveleigh precinct was originally the companion site to Carriageworks, comprising the original Eveleigh Railway Workshops built in the late 1800s.

Over at South Eveleigh that day when Mel and I were hanging out, she was drawn to a large heritage bell at the precinct’s entry garden which adjoins Redfern Station and Cornwallis Street, just near the heritage water tower.

Affectionately known as The Belltower in reference to its historic use in the timekeeper’s office for the rail yards’ Locomotive Workshop, the bell would ring to indicate the start and end of the workers’ shifts. A temporal measure of labour within the context of industry.

Fast-forwarding to 2020, the start and end of a “worker’s shift” at Carriageworks was radically altered as the Covid-19 pandemic ruptured our relationship to work as much as it made vulnerable how we connect with one another. Just prior to the pandemic I had committed to commissioning All is Life and then like so much arts programming it was placed on hold for a gruelling period as we dealt with the here and now, of then.

But gestation is not a bad thing necessarily, as we see in this extraordinary outcome. Over time, Mel’s attraction to the bell turned to the tuning fork, an acoustic resonator made of steel. Invented by British trumpeter John Shore in 1711, it resonates and vibrates at a specific constant pitch when its surface is struck, emitting a pure musical tone. Fortuitously, and in keeping with our first meeting at South Eveleigh, the two three-meter-tall tuning forks produced for this exhibition, were made in collaboration with Matt Mewburn and his team at Eveleigh Works, neighbouring the heritage Belltower that first sparked Mel’s imagination.

The tuning fork is part of a long history of humans using vibrations to understand our world, not just to tune musical instruments, but to treat illness, and to improve well-being. Decluttering expert and TV star, Marie Kondo has a tuning fork and rose quartz crystal for sale in her online shop - ironic considering she is enabling a consumer’s accumulation of stuff that may eventually be decluttered, if the same logic permits. 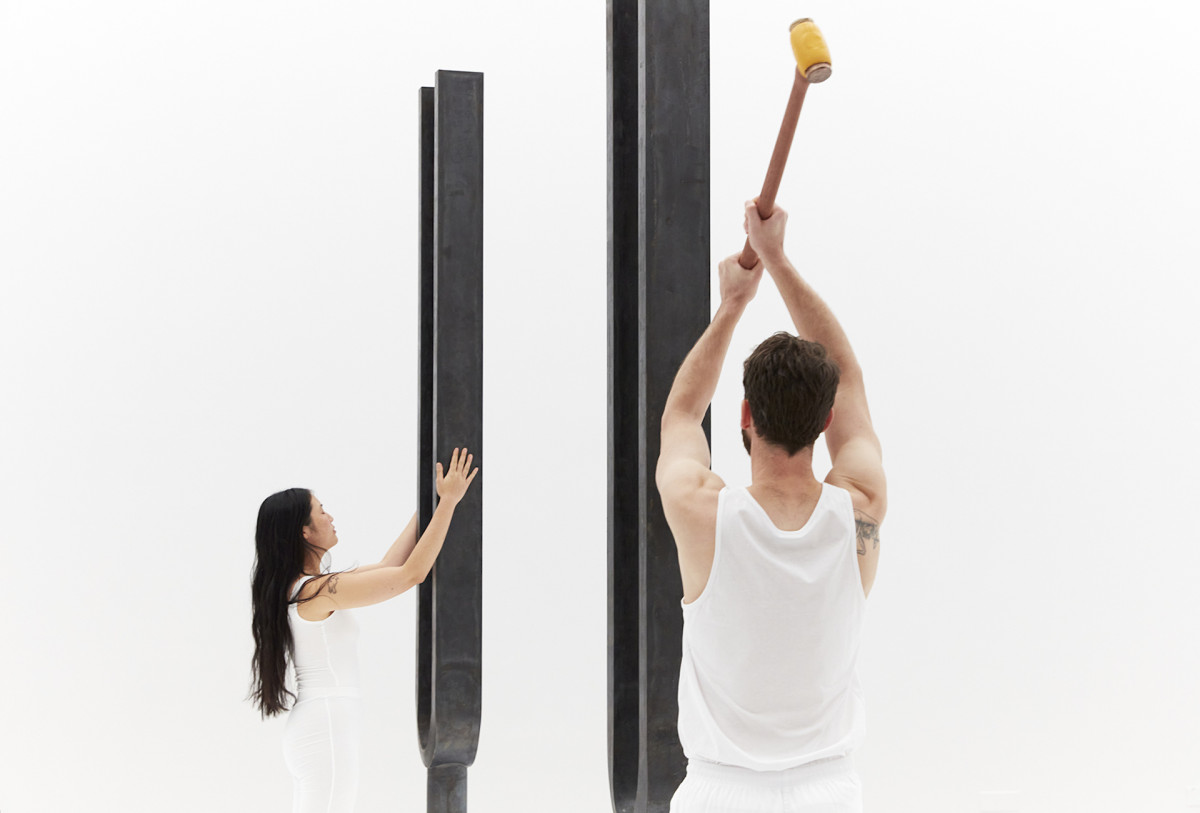 Kondo says: Striking the fork against the crystal creates pure tones that help to restore a sense of balance… The rose quartz crystal in this set is associated with purification, connection and comfort.

We see in this pop culture example that Zen Buddhist and traditional Shinto beliefs are at the core of a practice of purification and decluttering. Traditional Buddhism sees sound and vibration – manifesting in chanting rituals – as a foundation to how we understand the universe.

For Mel O'Callaghan, the tuning fork became a conduit for thinking through the key themes of this project: the relationship between life and non-life, and the animate and inanimate, starting with the primordial split of an atom, to contemporary practices of ritual and becoming.

Alive with transmissible energy, vibration, resonance, connection, and collaboration, Mel has produced four connected works: First sound, last sound, in Bay 21 where the tuning forks are placed on a large white platform acting as a resonant chamber and activated through performance; Pulse of the Planet – a recording of vibrations taken from the core of the earth, also in Bay 21; Call and Response – a black and white wall mural graphically connecting us from Bay 21 to Bay 19 where the video installation All is Life is situated.

For this video, All is Life, Mel travelled to Goa in 2022 to connect with a community with whom she had earlier made contact, to document the joyous celebration and rituals of the eco-feminist festival, Dhalo. Made in close collaboration with the community and their elders, All is Life reflects on ecstatic modes of experience that can only exist through the vibratory intensities that unite the individual to the collective.

Humans are instinctively drawn to the power of vibration. This possibly stems from our experiences in the womb where we once lived daily with our mother’s heartbeat and breathing. Ultimately, the universe is a complex system united by vibrations that are harmonic and hold everything in place, or that can be used to heal and bring comfort.

All is Life is a reminder we live among a network of living energies that are enriched by connection and community. For a project so invested in time – the deep past versus the precarious present – it is a joy to present All is Life – the first show I seeded at Carriageworks in my earliest days here, and the last to bear fruit as I exit the role. With this ambitious project, Mel O'Callaghan and her collaborators strike against the steel of Carriageworks with a powerful new work which draws on ancient systems and beliefs to connect with the here and now.

Mel O’Callaghan discusses All is Life, 2022

Previously unpublished speech notes for the opening of All is Life at Carriageworks on 22 June 2022.