Reviews, Profiles
Off the Wall and Into the Room
on Polly Borland

Lenticular printing has a curious history, dating back to the 1500s with tabula scalata emerging in England. Like today’s lenticular technology, the corrugated surface enabled the display of two images to be viewed at different angles. Though several variations followed over the years to come, it was not until the modern epoch of the early 20th century with the advent of stereoscopic lenses that lenticular imaging found a footing in a world being fast attuned to the distractions of amusements, souvenirs, and spectacle.

Polly Borland first seized upon lenticulars in 2016 with her exhibition Not Good at Human at Sullivan+Strumpf, Sydney. Untitled (purple, red, black and orange) is from this series. Combining images from that body of work with her now iconic series, Bunny, 2004-05, she was able to highlight the bodily forms and poses echoed in both. It is unsurprising that Borland’s images meld so effortlessly in this way when we consider her iterative visual language and its known repertoire of tropes and forms.

Borland’s earliest manifestations of monsters was in childhood with the exquisite corpse – an interactive surrealist parlour game, where an image is drawn on folded paper one section at a time, following on from the previous player’s hidden contribution. She was also entranced by patterned blinds her mother had installed on the windows at home; and describes her favourite Sunday dress as a shy little girl where the gathered fabric would unfurl to reveal a hidden pattern. For Borland, the lenticulars are a logical extension of these formative experiences. Aside from revealing a highly visual imagination from the get-go, they point to an ongoing interest in the morphing body as a pictorial riddle.

She cites the series Smudge, 2010 as an instance, where her practice began signalling a now persistent theme in shapeshifting and bodily transformation. With these images a viewer can’t clearly comprehend what they are seeing. Things are not easily readable and are not always what they seem to be. Her work requires sustained looking to register forms, solve its puzzle and figure it out. The lenticulars extend this idea, retaining an interest level through its interactivity – a viewer becomes a performer as they engage with the work, moving from side to side.

Borland sees the lenticular work as her foray into sculpture. “Photography became limiting for me, I wanted more from the medium”, she says. As freestanding double-sided wall sculptures, they depict performative scenes akin to soft sculpture. “Off the wall and into the room,” she quips, noting how a viewer’s surprise and discovery are bedfellows to her own process of experimentation.

Recently teaming up with Urban Art Projects, Borland’s inner sculptor is set to be unleashed with major new shift in direction where her imagery finds expression in bold new three-dimensional form. While the lenticulars signalled a restlessness with conventional printing, she describes her new sculptures as bringing “what is in the photo out into the real world”. 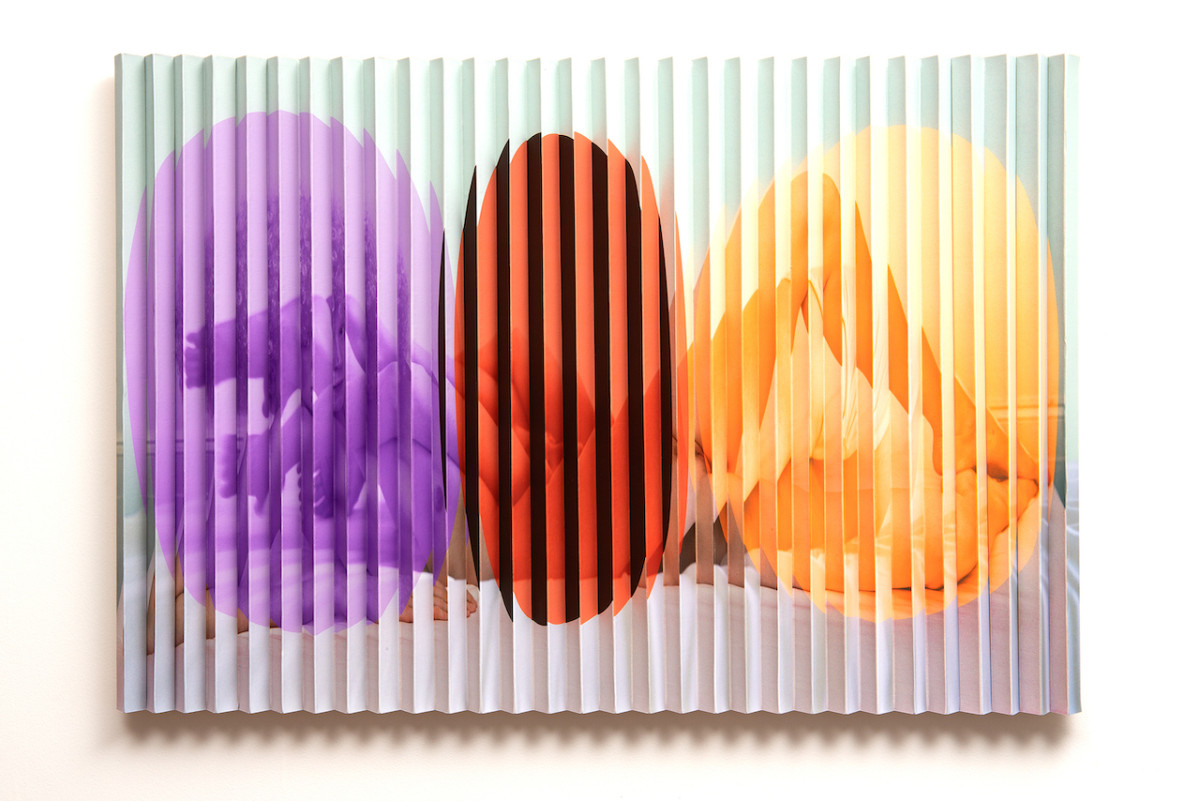