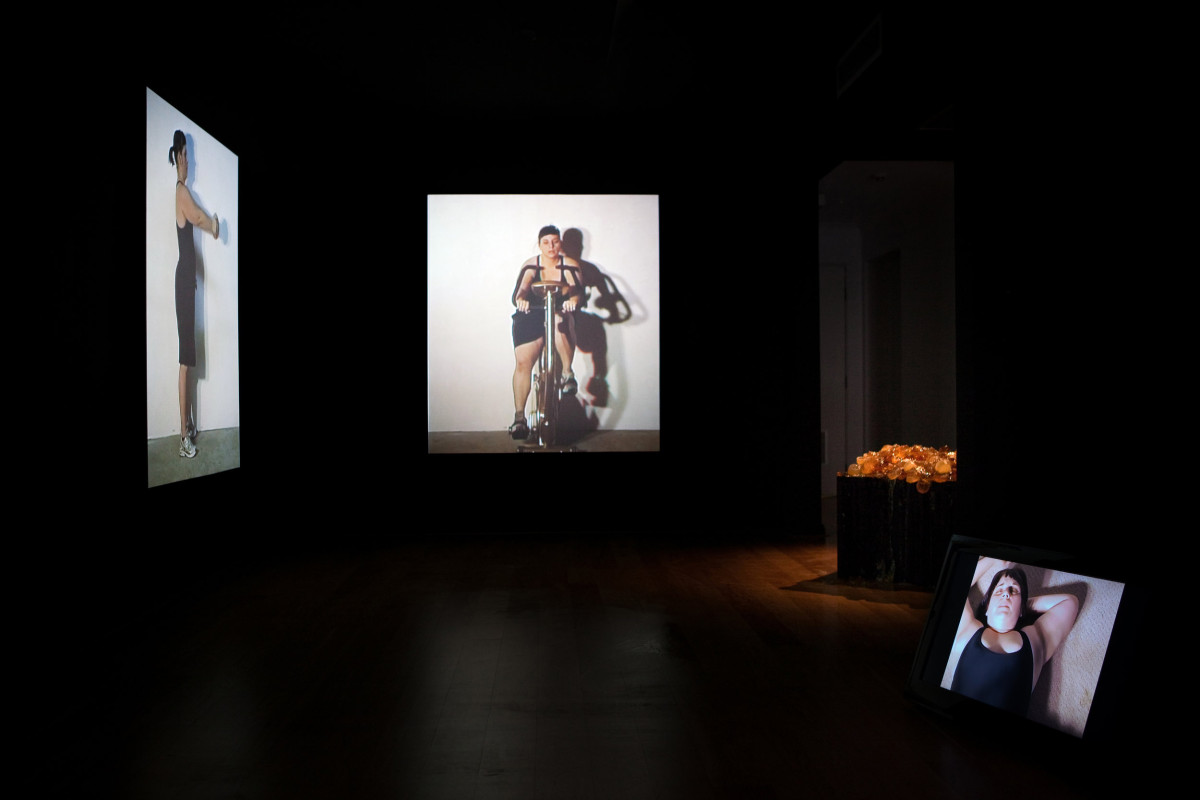 Jodie Whalen, I’m Worth My Weight in Gold, 2011
Courtesy of the artist

A fat woman occupies a zone of contradiction: invisible yet in the way. Excess is a common trope assigned to women in a patriarchal culture where conspicuous consumption is the Norm (if not the name of the man she’s married to). Impulsive, compulsive, repulsive is her lot of lot in life. Accumulation is a commonsense ideology; just don’t let it show on your hips. A swinging pendulum of gain and loss shapeshift the body on its yo-yoing expedition of rigorous diet routines and exercise boot camps. Get on that treadmill like a rat in a science experiment and shake off the ominous feeling you’re running fast from somewhere to a slow motion nowhere. Meanwhile chant Oprah’s motivational mantras and secretly reward yourself with another vice later on. Because you’re worth it. Because you’re worth your weight in gold.

Jodie Whalen tells me that Whalen has to be the worst surname for a fat girl who has struggled with weight issues all her life. ‘Nobody likes being called Fatso Whalen,’ she muses. It goes without saying that the reception of others – pejorative naming and shaming – dictates our perception of self. ‘You’re a great girl, everyone likes you but lose some weight because you’ll never find a boyfriend,’ was a comment made to Whalen at 15 by a well-meaning male friend. Little did he realise it would activate a life-long battle with the bulge. Before signing up for ‘body combat’ classes at the local Fitness First, the average gym junkie would have probably traded in a whole raft of body-combative behaviours, addictions and disorders that define self-worth or the lack thereof. In Whalen’s case, the struggle of becoming but never quite arriving at the prescribed ideal informs her particular take on self-portraiture.

The unstaged stage of Whalen’s practice revivifies self-portraiture by blurring documentary with performance art. Site-specific and ephemeral, performance art is dependent on being documented via photography, film or video for art historical posterity. Whalen complicates the nexus between documentation and documentary by implying the manner in which doco conventions have been given a radical makeover in a contemporary ‘Reality TV’ realm. A fusion of game show and talk show, such programs create a counter-reality through selective editing, narrating, product endorsements and audience participation. Wannabe chefs get fatter as they compete in glorified bake-offs on shows like MasterChef while in another timeslot on the same network, wannabe waifs vie for the biggest weigh-in loss on The Biggest Loser.

Commissioned by Blacktown Arts Centre, Whalen’s video installation, When the Going Gets Tough (2011) recalls both the mundane humdrum of an unedited Big Brother webcast as it does the scrupulously punishing dynamics of an endurance performance by the likes of Mike Parr. A single LCD screen depicts Whalen pushing her physical limitations in a workout session with a buff personal trainer that lasts a grueling 83 minutes (‘those last 23 minutes really, really hurt,’ she tells me). The action takes place in the same gallery space at Blacktown a week or so before showing there as part of Tom Polo’s recent curated group show YES I CAN/NO CAN DO. Whalen calls the work an ‘endurance performance,’ stressing as Gary Carsley notes in the catalogue essay, ‘high culture’s foregrounding of endurance-based performance with the visceral sweat of popular culture’s obsession with fitness and slimming.’ The idea of ‘performance’ is levelled out and democratised for Whalen; whether performed at the gallery or at the gym, the narcissistic dynamics of spectacle and spectatorship remain the same. Whalen performs for the camera and her audience is pushed as she’s punished. Nearby several LCD screens are arranged on the gallery floor in a circular arrangement, depicting the artist doing sit-ups. As her face and upper torso meets the screen, the viewer is lulled by the monotonous repetition of the action – its hypnotic and ritualistic quality further enhanced by the séance-like configuration of the screens.

When the Going Gets Tough takes up where earlier performances like I’m Worth My Weight in Gold (2008-11) left off. Whalen documents a structured pattern of weight loss whereby a set of exercises is repeated for the camera three times a week over three years. A companion performance called Take One (2008-10) involved recording her weight loss every two weeks and transforming the index of lost weight back into physical form as toffee. Staged over the same three-year period, Whalen held a toffee stall where passersby could ‘take one,’ effectively redistributing to the general public the weight she had lost. Little lumps of sickly sweet sugar represent success, achievement, happiness and reward. In Positive/Negative (2009) defeat creeps in as Whalen consumes for the camera a block of toffee representing an entire day’s calorie intake. The viewer waits 43 minutes and 46 seconds as the artist consumes a symbolic marker of her own weight, knowing what won’t be excreted as waste will go to her waist. Waiting for weight gain is transformed into weight loss as wasting.

Whalen’s performance for this solo exhibition at Parramatta Artist Studios will feature a live piece staged in the gallery space. The personal trainer is replaced with a tattooist who will literally render the text ‘60kg’ (the weight that falls within her ideal weight to height) on her body in white ink, stamped in Times New Roman font. The generic typeface alludes to the commonality of weight loss/gain in our culture, in the same way it speaks to the pseudo-individuality that characterises universalised aspirations for the perfect self-same body.

Whalen’s work understands how happiness and contentment is constructed according to accumulation and loss. A critical mass around such themes is evident in the work of Sydney artist peers mapping analogous terrain. For instance, Sarah Goffman’s mixed media installations are nourished on consumer excess; Tom Polo reinvents contemporary pop psychology’s promises of success as failure; Rachel Scott’s videos Waiting for my real life to begin (2005) and Hot Not (2006) negotiate surface, appearance and identity in an age where amateur video aesthetics reign supreme on DIY YouTube posts. Jodie Whalen contributes to the fold a growing/shrinking body of work – a body as work. As she sucks it up we chew the fat. Fatso Whalen: no more, no less, everless and evermore.

Catalogue essay for Jodie Whalen's I'm Worth My Weight in Gold, Parramatta Artist Studios, 8 April – 6 May 2011.

Published by Parramatta Artist Studios in 2011.